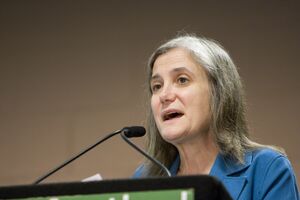 Amy Goodman is the producer and host of Democracy Now!, which she co-founded in 1966. She sees this program as way to give a voice to those "silenced by the corporate media."[1] and believes if it weren't for corporate sponsors promoting their own interests at the expense of everyday people, media could be "the greatest force for peace on earth" because of its ability to foster human understanding.[1]

In November 2000, then-president Bill Clinton called into Pacifica's La Nueva Alternativa in a get-out-the-vote effort for presidential hopeful Al Gore. Amy Goodman and La Nueva Alternativa host Gonzalo Aburto asked him several questions about his record. Goodman pressed Clinton on corporate control of both major political parties, granting clemency to Native American activist Leonard Peltier, his hand in executing a murderer who became mentally ill after he committed the crime, the bombing of Puerto Rico, granting amnesty to illegal immigrants, sanctions against Iraq and Saddam Hussein, keeping the embargo on Cuba vs. lifting the embargo on China, the Israel-Palestine conflict, his perceived responsibility for pushing the Democratic party to the right, NAFTA, mass incarceration, and racial profiling.[2] Towards the end of the interview, Clinton got frustrated, saying "You have asked questions in a hostile, combative and even disrespectful tone... and you have never been able to combat the facts I have given you."[2] After the interview, Democracy Now! co-host Juan González remarked, "I don’t think he’s ever had that many tough questions in a row in all of the press conferences that he’s held in the White House and elsewhere over eight years."[2] Goodman responded by saying, "It’s what it sounds like when reporters refuse to go on bended knee before power."[2]

1n 1998, Goodman and Jeremy Scahill investigated the role of Chevron in the death of two protesters who had occupied an oil platform owned by the company. Goodman and Scahill adapted the investigation into a radio documentary called "Drilling and Killing: Nigeria's Oil Dictatorship".[3] In the documentary, the two journalists interview local witness and Chevron officials who describe the protests and subsequent events. The interviewees tell how after over one hundred Nigerian activists began protesting against environmental degradation and for community improvements, Chevron transported Nigerian paramilitary forces to the oil platform, where they shot two activists, injured several, and imprisoned and reportedly tortured eleven.[3] Goodman also interviewed two plaintiffs –activists who had occupied the oil platform– after they opened a legal case against Chevron[4] and again after they lost and the oil company was cleared of all wrongdoing.[5]

In 1991, Goodman and Allan Nairn visited East Timor (now Timor-Leste) and saw a large, peaceful protest met with gunfire from the occupying, U.S.-armed Indonesian military, which left over 270 Timorese killed.[6][7] The killing would later be known as the "Santa Cruz Massacre".[8] Goodman and Nairn were badly beaten by the army and Nairn suffered a fractured skull from rifle butt wounds.[6][7] In a subsequent radio documentary released in 1992,[9] Goodman and Nairn described their time in the region as well as U.S. involvement in the Indonesian occupation of East Timor.[6][7] In 2002, the pair updated the documentary with video footage to compliment the audio.[10]

While reporting on the Dakota Access Oil Pipeline (DAPL) protests, Goodman was arrested. When asked why her journalist status failed to protect her from arrest, the defending prosecutor claimed "She’s a protester, basically. Everything she reported on was from the position of justifying the protest actions"[11][12] The Nation pointed out that Goodman's coverage on the Dakota Access Pipeline represented one of the only media sources to cover this protest: "At the time, not a single one of the major American broadcast networks (ABC, CBS, NBC) had sent a reporter to cover the Standing Rock mobilization; none had even bothered to mention it on the air."[12] After Democracy Now!'s video of the protests went viral, mainstream media began airing the footage and talking to Goodman.[13] In a subsequent Cable News Network (CNN) interview, Goodman claimed her arrest represented a message to all journalists: "do not come to North Dakota."[13] Goodman's charges were changed from "criminal tresspass" to "rioting", then eventually dropped after a judge failed to find probable cause.[14]

Arrest at the 2008 Republican National Convention

At the 2008 Republican National Convention, Goodman was arrested after questioning why police had arrested two other Democracy Now! journalists covering related protests.[15] Goodman was cited for interference with a peace officer and obstruction of the legal process, while the other two journalists were cited for felony riot charges.[16] All three journalists later reached a settlement with the cities of St. Paul and Minneapolis for $10,000.[16]