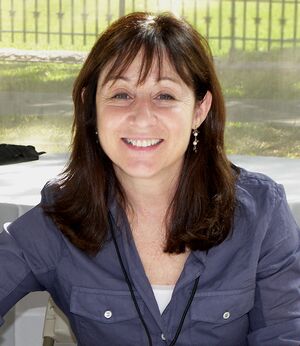 Jane Mayer is an investigative political journalist, staff writer at The New Yorker and the author of four books, most recently Dark Money: The Hidden History of the Billionaires Behind the Rise of the Radical Right.[1] Among other news outlets, she has frequented MSNBC[2] and Democracy Now![3] to discuss her reporting.

Dark Money: The Hidden History of the Billionaires Behind the Rise of the Radical Right discusses the Republican sweep of the 2010 midterms, using it to showcase the power of the Koch Brothers and their allies in the Koch Donor Network. As a New York Times book review puts it, "The (Koch) brothers had spent or raised hundreds of millions of dollars to create majorities in their image. They had succeeded. And not merely at the polls: They had helped to finance and organize an interlocking network of think tanks, academic programs and news media outlets that far exceeded anything the liberal opposition could put together."[4] Mayer spends much of the book discussing the Koch Brothers, but also has sections devoted to other rightwing billionaire donors, including among others Richard Mellon Scaife, John M. Olin, and the Lynde and Harry Bradley Foundation. Mayer also spends time devoted to 501(c)(4) organizations, explaining how rightwing billionaire donors can remain anonymous by funneling their money through these politically active nonprofits.

The Dark Side: The Inside Story of How the War on Terror Turned Into a War on American Ideals investigates the Bush administration's use of torture against terrorist suspects in secret prisons around the world. Mayer names many individuals responsible for enabling the use of torture and covert detainment sites, including Dick Cheney, David Addington, John Yoo, George Tenet, William Haynes, Alberto Gonzales, and James Mitchell.[5] Mayer also gives credit to many journalists for challenging and resisting the Bush regime's aims, including James Risen, Scott Shane, Son Suskind, and Seymour Hersh.[5] Secret torture and secret detainment sites also faced opposition from within the government, but Mayer points out that few members of the State Department, the military, Congress, the C.I.A. or the F.B.I. "had the temerity to confront Cheney, who clearly was the true source of these policies."[5]

Taken from:[1]
"The Dark Side: The Inside Story of How the War on Terror Turned into a War on American Ideals was named one of The New York Times’s Top 10 Books of the Year and won the J. Anthony Lukas Book Prize, the Goldsmith Book Prize, the Edward Weintal Prize, the Ridenhour Prize, the New York Public Library’s Helen Bernstein Book Award for Excellence in Journalism, and the Robert F. Kennedy Book Award."

Mayer also received a Guggenheim Fellowship for The Dark Side.

"For her reporting at The New Yorker, Mayer has been awarded the John Chancellor Award, the George Polk Award, the Toner Prize for Excellence in Political Reporting, and the I. F. Stone Medal for Journalistic Independence presented by the Nieman Foundation at Harvard."