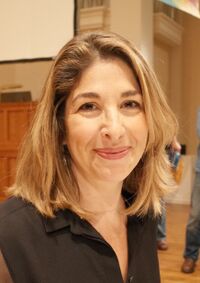 Naomi Klein is senior editor at The Intercept,[1] a Puffin Writing Fellow at Type Media Center, Gloria Steinem Chair of Media, Culture and Feminist Studies at Rutgers University,[2] and author of seven books, most recently On Fire, the (Burning) Case for the Green New Deal.[3]

Klein's book The Shock Doctrine argues that fundamentalist capitalism, the type favored by Milton Friedman and other members of the Chicago School, is so unpopular to the average person that "only circumstance in which a population would accept Friedman-style reforms is when it is in a state of shock, following a crisis of some sort—a natural disaster, a terrorist attack, a war."[4] Following this argument, the book claims "Some of the most infamous human rights violations of this era... were in fact either committed with the deliberate intent of terrorizing the public or actively harnessed to prepare the ground for the introduction of radical free-market 'reforms.'" [4]

Klein has been a proponent of the Green New Deal, saying that its supporters make her think "about the crucial difference between leadership that acts and leadership that talks about acting",[5] comparing it to the original New Deal,[6] and seeing it as an answer to the "pressing need to confront the ways in which the fires of climate breakdown are already intersecting with the fires of white supremacy and surging xenophobia globally."[7]

In a 2019 interview, she claimed the Green New Deal was the only legislation she had seen proposed where the scale of the solution matched the scale of the problem, calling it "a holistic approach that is really about changing the entire economy."[8] She also claimed resistance to climate action has been impeded by proponents of neoliberalism, who wish to give as little power as possible to the public sector while deregulating and reducing the taxes of polluting corporations. She claimed the support for a policy like the Green New Deal came from the fact that "a lot of people understand those [neoliberal] rules have failed them, with or without climate change."[8]

In a 2019 Democracy Now! interview, Klein claimed that the specific timing of scientific insights into climate change came at the worst possible time in human history, during the "free market zealotry" of the 1980s. She highlights how the prominent mindset at that time focused on reduction of collective action, cutting back on government programs and mass privatization, but Klein claimed the problem instead requires "unprecedented collective action and unprecedented public investment".[9] She also raised concerns over anti-immigration administrations worldwide refusing to accept climate refugees, seeing it an example of climate change intersecting with white supremacy and authoritarianism.

In April 2019, Klein teamed up with artist Molly Crabapple and U.S. Representative Alexandria Ocasio-Cortez to create a "postcard from the future": an illustrated video description of what could be possible if the Green New Deal came to pass.[10]

A 2008 New Yorker exposé explains that Klein "distrusts centralization, institutions, platforms, theories—anything except extremely small, local, ad-hoc, spontaneous initiatives. Basically, she really, really doesn’t like being told what to do."[4] It also describes how she "slides into the position that politics is always and everywhere about enrichment. Her great strength— following the money; never taking ideology at face value but always questioning who benefits from it; helping to pull the left back to the economic analysis that it forgot during the era of 'the personal is political'— is also a weakness. Her materialism is such that she sometimes seems scarcely to believe that politics exists at all."[4] The piece also describes Klein's rejection of utopian visions of all types and her wish to connect Friedmann with the misdeeds of Augusto Pinochet and Suharto, just as Karl Marx's legacy has been tainted by the crimes of Joseph Stalin and others authoritarian Communist leaders.[4]

In November 2019, Klein spoke at a Climate Crisis Summit in Des Moines, Iowa alongside Bernie Sanders, Alexandria Ocasio-Cortez, The Sunrise Movement and other influential grassroots proponents of the Green New Deal and large-scale environmental action. Klein endorsed Sanders, saying she had "never formally endorsed a candidate for President in my life- never mind spoken at a campaign rally." on Twitter.[11]

Klein Studied English and Philosophy at the University of Toronto.[12]

Klein has been senior editor at The Intercept since 2017.[1] According to her March 2019 CV, "She has also written a regular column for The Nation, The Globe and Mail and The Guardian that was syndicated in major newspapers around the world by The New York Times Syndicate. She has been a contributing editor at Harper’s and Rolling Stone. She has reported from China for Rolling Stone, Copenhagen (COP15) for The Nation, Buenos Aires for The Financial Times, and Iraq for Harper’s. Additionally, her writing has appeared in The New York Times, The Washington Post, Newsweek, The Los Angeles Times, The Globe and Mail, El Pais, L’Espresso, The New Statesman, Le Monde, among many other publications."[12] According to the same CV, Klein's television appearances have included "Fareed Zakaria’s GPS on CNN, BBC Newsnight and HARDTalk, Democracy Now!, The Rachel Maddow Show, The Colbert Report, The Tavis Smiley Show, The Charlie Rose Show and HBO’s Real Time with Bill Maher.

Criticism of The Shock Doctrine