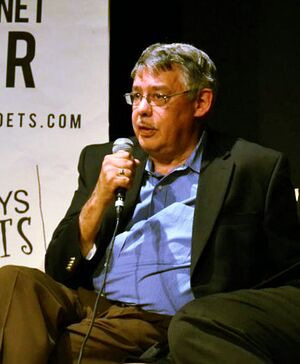 One month after the September 11, 2001 attacks, González reported in the New York Daily News on U.S. Environmental Protection Agency tests which showed dangerously high levels of contamination around Ground Zero. In response, then-EPA director Christie Whitman wrote an op-ed piece in same publication accusing González of alarmism, saying "Those of us in government and the media share an obligation to provide members of the public, in a responsible and calm manner..."[2] Whitman's piece and additional hostility from the Rudolph W. Giuliani administration made it difficult for his stories to get published prominently.[2][3][4] As González described, "Some of the editors started quashing my columns... They killed two of them and relegated the others to the back pages."[3]

After five years, González was exonerated, as The New York Daily News took up reporting on the adverse effects of these contaminants on 911 first responders. In 2007, the publication received a Pulitzer Prize for related reporting, but noticeably left González off of the award and did not give him any credit in the speeches, which The Village Voice dubbed a "dishonorable non-mention."[2][4]

Throughout the year of 2010, González investigated a computerized New York City timekeeping system called CityTime, which had "ballooned to more than 10 times its original price tag."[5] González also looked into CityTime consultants getting overpaid by NYC taxpayers for a system that did not work as advertised.[6] He pointed out that defense contractor Science Applications International Corporation (SAIC) had failed to implement CityTime as promised and that Michael Bloomberg had managed the situation irresponsibly, saying "Last fall, City Hall laid off 510 public school aides to save $12 million. At the same time, the mayor's aides were adding more than $24 million to the operating budget of the office of payroll administration just to help pay for CityTime's consultants. How can anyone justify firing $18,000-a-year school aides while hiring half-a-million-dollar computer geeks who can't even deliver a good product?"[6]

After federal prosecutors began investigating the "fraud, waste and money laundering by private contractors",[7] González accused Bloomberg for turning a blind eye throughout the entire process and wondered "who else in his administration failed to mind the store".[7] González's series on this scandal won the 2010 George Polk Award.[8]

González attended Columbia College, participating in the Civil Rights and Anti-Vietnam War movements of the 1960's, including occupying buildings in protestation of Columbia's contributions to weapons research during the time of the Vietnam War.[1][3] González was arrested several times as a result of these protests and spent thirty days in jail.[3]

In 1969, González helped found the New York City Young Lords, an community activism organization which sought "to end oppression in the broadest possible sense of the word, end the oppression of the... Puerto Rican people here in the United States and in Puerto Rico and... to achieve a social revolution in the United States that would make life better for, not only for us, but for everyone else in the country and around the world."[9] Inspired by the Black Panthers, the Puerto Rican Young Lords participated in many community-focused "direct-action gambits", including handing out lead testing kits to children, briefly transforming a church into a local free breakfast program, and commandeering a hospital wing to help test community members for anemia, TB and lead poisoning and give drug addicts access to treatment.[3][10] González described the New York Young Lords' actions as "militant and often theatrical protests against inadequate city services... aimed at spurring reforms by local officials."[10]

González is a founding member of the National Association of Hispanic Journalists (NAHJ) and served as the organization's president between 2002 and 2004.[13][14] According to González, NAHJ was originally founded to "advocate for greater employment opportunities for Latinos in the American media, as well as to improve the coverage of Latinos by the mass media."[13] González's winning platform in 2002 focused on taking a more aggressive stance against the corporate consolidation of the media, which he worried had an adverse effect on American democracy and had led to the decline of diverse viewpoints.[13] In 2008, González was inducted into the NAHJ Hall of Fame.[15]

After leaving New York Daily News, González began working as a professor at the Rutgers School of Communication and Information.[16] In 2018, Rutgers appointed him to the Richard D. Heffner Professorship in Communications and Public Policy.[17]

González has worked for Democracy Now! since he co-founded the show with Amy Goodman and two other journalists in 1996.[18]