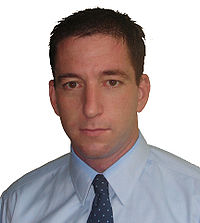 Glenn Greenwald is a journalist who has written for the The Intercept, the Guardian, and Salon. Prior to becoming a blogger for Salon, Greenwald was a constitutional law and civil rights attorney in New York. Greenwald is the author of two New York Times Bestsellers: How Would a Patriot Act? (May, 2006), A Tragic Legacy (June, 2007), as well as the book "Great American Hypocrites." Greenwald is famous for his lengthy polemical blog entries, as well as his scathing critiques of the mainstream media, United States foreign policy, legal and constitutional law issues, as well as government-sponsored manipulative propaganda and public relations efforts. He is the author of several books,[1] most recently No Place to Hide: Edward Snowden, the NSA, and the U.S. Surveillance State.

Greenwald Resigns from The Intercept

On October 29, 2020, Greenwald announced his resignation from The Intercept, partially over censorship of an article he wrote that criticized Democratic presidential nominee Joe Biden five days before the 2020 U.S. presidential election. In his resignation article, Greenwald said, "The current iteration of The Intercept is completely unrecognizable when compared to that original vision. Rather than offering a venue for airing dissent, marginalized voices and unheard perspectives, it is rapidly becoming just another media outlet with mandated ideological and partisan loyalties, a rigid and narrow range of permitted viewpoints (ranging from establishment liberalism to soft leftism, but always anchored in ultimate support for the Democratic Party), a deep fear of offending hegemonic cultural liberalism and center-left Twitter luminaries, and an overarching need to secure the approval and admiration of the very mainstream media outlets we created The Intercept to oppose, critique and subvert."[2]

Timeline of Reporting on Bolsonaro

Reporting on Russia and Russiagate

A few months before Donald Trump won the 2016 U.S. presidential election, Greenwald noticed that "a frequent weapon in the 2016 election is to publicly malign those [Clinton and her supporters] regard as critics and adversaries as Russia sympathizers, Putin stooges, or outright agents of the Kremlin."[14] Greenwald pointed out that accusations of Russian allegiance were thrown at Trump and his campaign, but also "anyone perceived to be an impediment to Clinton’s victory", including Wikileaks, her Democratic primary challenger Bernie Sanders, Green party presidential nominee Jill Stein, as well as "media outlets and journalists who simply reported on the contents of the leaked DNC emails" such as the Intercept.[14]

Greenwald countered these accusations by asserting "one presidential candidate who actually has significant, questionable ties to Russia is named... Hillary Clinton."[15] He cited a New York Times article that showed how Bill and Hillary Clinton made a deal which “gave the Russians control of one-fifth of all uranium production capacity in the United States” while receiving undisclosed donations to the Clinton Foundation from the deal's engineers.[16]

In another piece, Greenwald wondered why no charges of inappropriate closeness with the Kremlin had been leveled at then-president Obama, saying "...the most glaring irony of all is that as Clinton-led Democrats this year equate overtures toward Russia as evidence of Putin-loving disloyalty — whether it be Trump’s opposition to arming Ukraine or his heretical questioning of NATO— there is an American politician who has, time and again, accommodated Putin, sought to improve relations with Moscow, dismissed as fearmongering the threat Russia poses to the U.S., and repeatedly taken steps that benefited Russian interests. That politician’s name is Barack Obama." [17]

After Special Council Robert Mueller released his final report in April 2019, Greenwald released a triumphant piece proclaiming "The two-pronged conspiracy theory that has dominated U.S. political discourse for almost three years – that (1) Trump, his family and his campaign conspired or coordinated with Russia to interfere in the 2016 election, and (2) Trump is beholden to Russian President Vladimir Putin — was not merely rejected today by the final report of Special Counsel Robert Mueller. It was obliterated: in an undeniable and definitive manner."[18]

During the debate, Risen criticized Greenwald's style of writing on this case, saying to him: "Many times what you do is you criticize the political or journalistic points of view of either the writer or a politician who is talking about Trump and Russia, fairly and often validly, but you don’t deal with the underlying issue of the substance of the Trump and Russia case... I wonder whether the way in which you write about these issues masks an acceptance of the substance of the case that you don’t want to talk about."[19]

Scahill criticized Greenwald for using Fox News as a vehicle for spreading his opinion about the Trump-Russia case, saying "a lot of the times when you’re on Tucker Carlson’s show... one of the more rabid and dangerous people, particularly on issues of race in this country... you do not make it a point to go after him for those things that filter into what is actually going on in this country and what we should be standing in opposition to. So I find that curious."[19]

Greenwald responded by pointing out Scahill's frequent appearances on Bill Maher's show, calling Maher "incredibly bigoted and racist and horrible in all kinds of ways" and saying "I presume you (go on Maher's show) because you believe that the things you’re saying are important and you want to have a platform and reach the most number of people that you can in order to do them." [20]

After the Trump administration's May 2019 indictment of Wikileaks founder Julian Assange, Greenwald worried about its consequences on press freedom, saying "With these new charges, the Trump administration is aggressively and explicitly seeking to obliterate the last reliable buffer protecting journalism in the United States from being criminalized, a step that no previous administration, no matter how hostile to journalistic freedom, was willing to take. The U.S. government has been eager to prosecute Assange since the 2010 leaks. Until now, though, officials had refrained because they concluded it was impossible to distinguish WikiLeaks’ actions from the typical business of mainstream media outlets. Indicting Assange for the act of publishing would thus make journalism a felony." [21]

In a series of tweets after the indictment, Greenwald criticized Democrats for their failure to stand up for Assange, sharing a 2010 Wall Street Journal article by U.S. Senator Dianne Feinstein entitled "Prosecute Assange Under the Espionage Act". Greenwald also linked to 2010 interviews where then-Vice President Joe Biden and then-Secretary of State Hillary Clinton spoke out against Assange, respectively calling him a "high-tech terrorist"[22] and saying "he has to answer for what he has done."[23] Greenwald also shared a Politifact "True" ruling on the statement, "The Obama administration has used the Espionage Act to go after whistleblowers who leaked to journalists ... more than all previous administrations combined".[24] and noted how few Democrats came to Assange's defense other than Bernie Sanders, Tulsi Gabbard, Elizabeth Warren, and Ron Wyden.[25]

After Assange's 2010 arrest on sexual assault allegations, Greenwald raised concerns in a Democracy Now! interview, pointing out that Assange was never charged with a crime and saying he found it "questionable indeed whether what’s really going on is a politically motivated effort to get him out of WikiLeaks, stop what he’s doing in terms of exposing and bringing transparency to governments around the world, and ultimately hand him over to the United States." [26] Greenwald also mentioned how, following Assange's arrest, WikiLeaks was "essentially removed from the internet, not just through a denial of service attacks that are very sophisticated, but through political pressure applied to numerous countries. Their funds have been frozen, including funds donated by people around the world for his — for Julian Assange’s defense fund and for WikiLeaks’s defense fund... Leading politicians and media figures have called for their assassination, their murder, to be labeled a terrorist organization."[26] Later Greenwald stated, "this extralegal persecution ought to be very alarming to every citizen in every one of these countries, because it essentially is pure authoritarianism and is designed to prevent the internet from being used as its ultimate promise, which is providing a check on unconstrained political power."[26]

Greenwald, fellow Guardian writer Evan MacAskill, and fellow The Intercept co-founder Laura Poitras met with National Security Agency whistleblower Edward Snowden in June 2013.[27] Greenwald and Poitras released a 12-minute video interview of Snowden where he explained how as he rose up the ranks at the NSA, he was "exposed to a lot more information on a broader scale then the average employee",[28] noticed many worrying aspects of his work were "actually abuses"[28] that "happened on a frequent basis."[28]

Speaking on his wish to alert others to these problems Snowden said, "over time that awareness of wrongdoing sort of builds up and you feel compelled to talk about. And the more you talk about the more you're ignored. The more you're told its not a problem until eventually you realize that these things need to be determined by the public and not by somebody who was simply hired by the government."[28]

Describing the NSA operations he found worrying, Snowden said, "NSA and intelligence community in general is focused on getting intelligence wherever it can by any means possible..."[28] He also described how a mission that was "narrowly tailored as foreign intelligence gathered overseas" had since expanded to include domestic surveillance as well, saying: "Any analyst at any time can target anyone, any selector, anywhere... I sitting at my desk certainly had the authorities to wiretap anyone from you or your accountant to a Federal judge to even the President if I had a personal e-mail."[28]

Asked about why people who didn't engage in wrongdoing should be concerned, Snowden said, "even if you're not doing anything wrong you're being watched and recorded. And the storage capability of these systems increases every year consistently by orders of magnitude to where it's getting to the point where you don't have to have done anything wrong. You simply have to eventually fall under suspicion from somebody even by a wrong call. And then they can use this system to go back in time and scrutinize every decision you've ever made, every friend you've ever discussed something with."[28]

In August 2014, Greenwald's husband, Brazilian politician David Miranda, was detained and searched for nine hours at London Heathrow Airport. The NSA worked together with M15 to have Miranda searched, because they suspected he was carrying data related to the Edward Snowden case.[29] However, the only way to legally search him was to invoke schedule 7 of the U.K.'s 2000 Terrorism Act.[30] Therefore, M15 claimed publication of Snowden-related documents could be defined as an act of terrorism, saying disclosing or threatening to disclose these leaked documents was "designed to influence a government, and is made for the purpose of promoting a political or ideological cause. This therefore falls within the definition of terrorism."[29] The Guardian remarked that "The use of schedule 7 against someone who was known not to be a terrorist was a blatant abuse– and an alarming precedent in which a government matched journalism with terrorism."[29]

In July 2012, he joined the Guardian along with "other American-based columnists — including Michael Wolff, Ana Marie Cox and Naomi Wolf — as part of its effort to create a larger presence in the United States." [32]

In February 2007, he began working for online media outlet Salon after writing an online blog entitled "Unclaimed Territory" for a few years.[33]