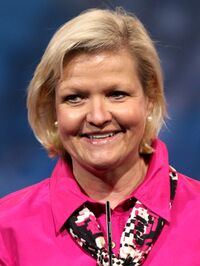 Cleta Mitchell is the senior legal fellow at the Conservative Partnership Institute and chairs its Election Integrity Network.[1] Mitchell was a partner in the Washington, D.C., office of Foley & Lardner.[2] She has been called "one of the GOP's top election lawyers over the last quarter of a century"[3] and "the conservative movement's anti-gay eminence grise."[4] Mitchell serves of the board of many conservative groups, such as the American Conservative Union, the Institute for Free Speech (formerly called the Center for Competitive Politics), the Public Interest Legal Foundation, and the Lynde and Harry Bradley Foundation. Additionally, she has served as counsel for Republican groups, such as the National Republican Senatorial Committee and the National Republican Congressional Committee, as well as the general counsel for the National Rifle Association.

Mitchell began her career as a "liberal Democrat" in the Oklahoma State House from 1976 to 1984 where she was the first woman in the U.S. to chair the state appropriations and budget committee and "a driving force behind the passage of Oklahoma's Equal Rights Amendment." But by 1996, Mitchell had switched to the Republican party.[4]

In 2020, Mitchell advised Trump's in his attempt to overturn the results of the presidential election. She supported the former president's inaccurate claims that the election was stolen from him and attended a call during which he told Georgia Secretary of State Brad Raffensperger to "find" votes that would overturn Biden's victory in the state.[5][6]

In 2021, Mitchell joined the Conservative Partnership Institute as a senior legal fellow and is planning to use her role to "coordinate" conservative voting positions, including in opposition to Democrat-led H.R.1, an elections reform bill that would undo Voter ID laws, support mail-in ballots, and enact automatic voter registration.[7]

After the 2020 presidential election, Mitchell publicly defended Trump's inaccurate claims that the election was stolen from him, including telling Reuters "the president's allies were prepared to fight what she characterized as a 'very well-planned-out assault' by liberals to change rules about ballot counting after Election Day..."[5]

Mitchell also attended a call during which Trump told Georgia Secretary of State Brad Raffensperger to "find" votes that would overturn Biden's victory in the state. She resigned from the law firm Foley & Lardner a few days after the call was exposed by the Washington Post.[6]

A former senior attorney at the Justice Department's voting right section noted that Mitchell "reportedly interjected multiple times during the call in which she tried to support Trump's allegations of fraud... Her role in that call may well be part of the investigation [into whether Trump and others broke the law pressuring Raffensperger to overturn Biden's victory in Georgia].[9]

Mitchell joined Trump's legal team after being invited by his former Chief of Staff, Mark Meadows. Meadows appeared to have repeatedly used his campaign contributions for personal expenditures, resulting in a federal election complaint from Citizens for Responsibility and Ethics in Washington. Additionally, "a recent filing with the Federal Election Commission, which includes a large, anomalous payment from Meadows' PAC to Mitchell's former firm, Foley & Lardner, suggests that the complaint triggered a federal investigation."[5]

The paperwork to start the scandal-ridden former head of the EPA Scott Pruitt's legal defense fund was filed by Mitchell who also served as Pruitt's attorney. According to E&E News that fund did not become "active" until 2018.[10] The only contribution to that fund in 2018 came from millionaire Diane Hendricks.[11] Mitchell was an active part of defending Scott Pruitt after ethics and campaign finance violation allegations surfaced during his tenure at the EPA, in a National Review article, Mitchell called Pruitt's scandals which ultimately led to Pruitt's resignation, "a manufactured crisis, punctuated by false or exaggerated accusations."[12]

Cleta Mitchell is the Board Chair of the Public Interest Legal Foundation (PILF), which sent letters to hundreds of local election workers in November 2017 "as part of a larger concerted effort to remove voters from registration lists and further its false and baseless claim that there is widespread voter fraud across the country."[13]

One panel at the Council for National Policy's 2020 national meeting was called "Election Results and Legal Battles: What Now?". The discussion featured Mitchell, PILF President Christian Adams, and other lawyers.[9]

Mitchell has indicated that PILF "could get active in the legal battles over the new Georgia law", which "makes voting tougher with new curbs on absentee ballots and on voters in heavily Democratic urban and suburban areas..."[9]

Mitchell was a Democrat at the beginning of her political career. She helped pass the Equal Rights Amendment in Oklahoma and authored a successful universal preschool proposal in the state.[14] Michell's second husband, Fidelity National Bank board chairman Dale Mitchell, was convicted of fraud in 1992. Cleta Mitchell called his conviction a result of "overreaching government regulation" and "became increasingly disenchanted with the social liberal policies she had supported and moved to Washington to become director of the Term Limits Institute... The combination of events led her to switch her registration to independent and then Republican."[14]

As of September 2020, Mitchell is a Board of Governors member of the Council for National Policy.

As of February 2021, Mitchell is a board member of the Bradley Foundation.