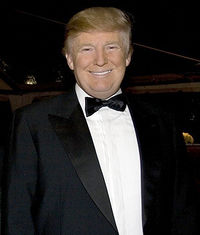 Donald Trump is the former President of the United States, a billionaire real estate developer, and the chair and president of the Trump Organization, a privately held limited liability company that engages in sales, marketing, real estate development, property management and other activities.[1] Trump owns properties including 40 Wall Street and Trump Tower in New York City and the Doral golf resort in Miami.[2] Trump is an outspoken Republican figure and donor and repeatedly expressed interest in running for President[3] before declaring his candidacy in June 2015 for the Republican nomination in the 2016 election cycle.[4] He is also known for television appearances on Fox News and on the NBC reality show "The Apprentice,"[2] and has been described as a "provocateur" by The Washington Post for his frequent outrageous statements, including repeated questioning of President Barack Obama's citizenship.[5]

Trump has been a major donor to both Republican and Democratic candidates and causes.[6] In 2014 he was revealed to have made a previously unknown $15,000 contribution during the 2011-2012 Wisconsin recall elections to Wisconsin Club for Growth, which is a target of a long-running investigation into potentially illegal campaign coordination with Wisconsin Governor Scott Walker's electoral campaign.[7]

Trump has been a donor to Republican candidates and groups, though statements by his staff may at times have overstated the size of his contributions, according to a review by the Center for Responsive Politics.[8] Trump was "a prolific donor to both Democrats and Republicans" from 1990 to 2011 according to the Center for Responsive Politics, which found that about half of the individual candidates who received contributions from Trump were Democrats, and that Trump contributed to both Republican and Democratic party committees and PACs.[6] Trump frequently appears as a speaker at right-wing events including the Conservative Political Action Conference[9][10] the South Carolina Freedom Summit[11] and Iowa Freedom summit,[12] and the Faith and Freedom Coalition, among many others.

Trump has also repeatedly floated the idea of becoming a presidential candidate himself.[3] In March 2015, he formed an exploratory committee for a possible 2016 presidential run,[13] then officially announced his candidacy for the Republican nomination in June 2015.[4]

Trump reported contributions to several dozen individual candidates and to PACs and party committees in 2014. Contributions of $2,500 or more included:[14][16]

A Super PAC called Kentuckians for Strong Leadership ran ads attacking Democrat Alison Grimes, who was running against Sen. Mitch McConnell in the 2014 election cycle, turned out to be almost entirely funded by out-of-state donors, including Trump, who contributed $50,000. Many of the group's funders had connections to Karl Rove and American Crossroads, including the organization's listed contact, who also served as treasurer for American Crossroads, according to the Center for Responsive Politics.[17]

Ties to Scott Walker and Wisconsin Club for Growth

Trump made an undisclosed contribution of $15,000 in April 2012 to Wisconsin Club for Growth (WiCFG), a Wisconsin-based organization that spent at least $9.1 million during the recall elections, and funneled at least $10 million more to other politically-active groups like Wisconsin Manufacturers and Commerce, while reporting that it spent $0 on politics to the IRS.[18] The contribution only became public in August 2014, when documents related to a "John Doe" investigation into potentially illegal campaign coordination between Walker's campaign, WiCFG, WMC, and possibly other groups were briefly unsealed. According to the Milwaukee Journal Sentinel, the documents suggest that Walker was advised to personally solicit funds from wealthy contributors for WiCFG:

"The records include example after example of Walker or his aides encouraging donors to give money to the Wisconsin Club for Growth.

"In September 2011, Doner sent an email to Walker and others with brainstorming ideas for raising money for the Wisconsin Club for Growth. Among them: "Take Koch's money," "Get on a plane to Vegas and sit down with Sheldon Adelson," and "Go heavy after (corporations) to give."

Case documents filed by the prosecutors include the following supporting exhibits related to Trump: