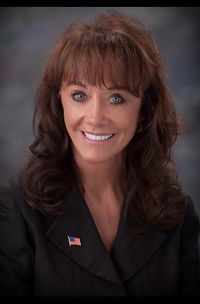 Diane Hendricks is the chair and co-founder of Hendricks Holding Co. and ABC Supply, the largest roofing supply firm in the country, based in Beloit, Wisconsin. She is the wealthiest woman in Wisconsin, but consistently fails to pay state income taxes according to news reports.[1] She is the largest donor to Governor Scott Walker, as well as a donor to the Koch Network and the Republican Party. As of June 2016, Forbes listed Hendricks number one on the list of "America's Richest Self-Made Women" at an estimated net worth of $4.8 billion.[2] Diane Hendricks also served many years on the board of directors for the Bradley Foundation. She was acknowledged at the Koch seminar in June 2011 in Vail, Colorado for donating at least $1 million to Koch-related causes. [3]

In May of 2016, Diane Hendricks was selected to chair the Trump Victory Committee by Chairman of the Republican National Committee, Reince Priebus.[1] Hendricks served as one of Trump Victory's several vice-chairs, joining other major Republican fundraisers like Mel Sembler, Liz Uihlein and Woody Johnson, who helped with the financing of Jeb Bush's 2016 presidential bid and Mitt Romney's 2012 campaign.[4] The joint committee was formed to raise money for Donald Trump's presidential campaign, the Republican National Committee, and GOP committees in 11 different states.[1]

Like Donald Trump, Hendricks has received negative publicity for failing to pay her taxes. In four of five years from 2010 through 2014 Hendricks did not pay any Wisconsin state income taxes, according to a June 2016 article from the Milwaukee Journal Sentinel.[1] The billionaire businesswomen owed nothing in taxes for three consecutive years from 2012 through 2014 after she paid a $290,415 state tax bill in 2011.[1] The tax director for ABC supply said that Hendricks paid $7.6 million in state taxes for 2015, but due to an extension on her 2015 return, this figure had yet to be verified.[1] Joel Joyce, a partner at the oldest CPA firm in Wisconsin, commented on the news of Hendricks' returns, saying "it's unusual to go zero, zero, zero and then owe $7.6 million."[1]

The Center for Responsive Politics lists Hendricks as the 23rd largest donor to outside spending groups in the 2016 cycle as of September 26, 2016.[5]

Reform America Fund is funded primarily through Diane Hendricks' fortune, she contributed over $5 million to the super PAC between September and October 2016. The Super PAC dropped a seven-figure ad buy criticizing Feingold for voting in favor of the 2009 federal stimulus bill on October 17, 2016.[6] A second ad, released October 25 shows children counting down from ten in various languages before a bomb explodes revealing text that reads, "A nuclear Iran is a threat the world. Russ Feingold supports the Iran nuclear deal." The group, which has also spent on advertising criticizing Democratic presidential nominee Hillary Clinton, also received contributions from Richard Uihlein, David Humphreys, Mary Kohler and Jere Fabick.[7][8]

The organization was registered in September, 2016 as a separate group from Reform America Fund, however both groups have the same Treasurer, Lorri Pickens and the same spokesperson, Chris Martin. Per FEC filings Reform America Fund is managed by Walker's campaign guru R.J. Johnson and both entities are also registered to the same address in Black Creek, Wisconsin.[10]

Freedom Partners is heavily invested in key U.S. Senate races, propping up Republican Senate candidates in Indiana, Pennsylvania, Nevada, Ohio and Wisconsin. As of September 26, 2016 the super PAC has spent $27,748,098 in the 2016 election cycle.[12]

See a full list of the Freedom Partners 2016 advertising here.

Hendricks contributed $1 million to the Koch group during the 2014 election cycle.[13]

In June of 2015, Diane Hendricks donated $5 million to Unintimidated PAC, a super PAC aligned with Scott Walker's 2016 presidential bid. With her multi-million dollar contribution, Hendricks joined a handful of other seven-figure supporters that helped the PAC reach $20 million by June 30, 2016. Unintimidated PAC spent $1.8 million of the $20 million raised before Walker left the race in September 2015, Diane Hendricks was reimbursed $4 million.[14]

Hendricks is the largest known political donor to a state candidate in Wisconsin history,[15] contributing a total of $529,100 to Scott Walker's gubernatorial campaigns, according to the Wisconsin Democracy Campaign.[16] Her largest disbursement of funds to Walker came in the 2012 recall election when she gave $500,000 to Walker's campaign.[1]

In a video shot on Jan. 18, 2011, days after Walker was sworn in as governor and shortly before he introduced his Act 10 bill ending collective bargaining rights for public sector workers, Walker spoke privately about his plan to "divide and conquer" Wisconsin workers in a videotaped conversation with Diane Hendricks.

“Any chance we'll ever get to be a completely red state and work on these unions....And become a right-to-work [state]?,” Hendricks asks in the video. Walker replies: “Well, we're going to start in a couple weeks with our budget adjustment bill. The first step is we're going to deal with collective bargaining for all public employee unions, because you use divide and conquer... That opens the door once we do that.”

The tape was released by videographer Brad Lichtenstein in May 2012 and received extensive press attention. Although Walker for years insisted that private sector "right to work" would not get to his desk, he eventually signed the ALEC-inspired bill into law in 2015 and Wisconsin became the 25th right to work state.[17]

Over the period of January 1 to October 20, 2014, Hendricks gave a total of $1 million to the Republican Party of Wisconsin, outspending the next largest donor by a magnitude of five.[18] The surge of spending by the billionaire came ahead of the expectation that GOP lawmakers would push a right-to-work bill in the following congressional session.[18]