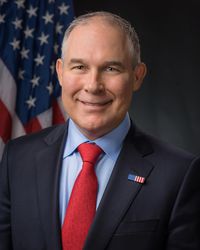 Scott Pruitt is the former Administrator of the U.S. Environmental Protection Agency (EPA). Before taking over the EPA, he was the Republican Attorney General of Oklahoma and a Republican member of the Oklahoma State Senate in districts 36 and 54. While Oklahoma AG, George Will called Pruitt "one of the Obama administration's most tenacious tormentors."[1]

EPA Pruitt's calendars between February and May 2017 detail many meetings with the corporations he is supposed to regulate.[2] "Since taking office in February, Mr. Trump’s E.P.A. chief has held back-to-back meetings, briefing sessions and speaking engagements almost daily with top corporate executives and lobbyists from all the major economic sectors that he regulates — and almost no meetings with environmental groups or consumer or public health advocates, according to a 320-page accounting of his daily schedule from February through May, the most detailed look yet at what Mr. Pruitt has been up to since he took over the agency," the New York Times reported.[3]

William K. Reilly, the E.P.A. administrator under the first President George Bush, was quoted in the New York Times describing, "the level of meetings between Mr. Pruitt and industry executives as unusual."[3]

The Attorney General of the State of California sued the EPA on August 11, 2017, "alleging it failed to comply with a request for documents that might indicate whether agency Administrator Scott Pruitt has a conflict of interest" and seeking to make the EPA turn over documents in order to determine if Administrator Pruitt and his EPA have complied with federal ethics laws regarding conflicts of interest, according to the Los Angeles Times.[4]

Attorney General Xavier Becerra "used the Freedom of Information Act to request documents involving the issues on which potential conflicts could exist, but said the papers have not been provided," reported the LA Times. EPA spokeswoman Liz Bowman, responded, "It's unfortunate that California is suing the Agency, draining resources that could be better spent protecting human health and the environment -- rather than working with EPA's career staff, as they can gather all the information requested."[4]

As EPA Administrator, "Pruitt is taking extraordinary measures to conceal his actions, according to interviews with more than 20 current and former agency employees" by the New York Times. His supporters -- such as Steven J. Milloy, the junk-science arbiter at The Advancement of Sound Science Coalition established to provide public relations cover for the tobacco industry -- claim the increased secrecy (locked floors, employee passage allowed only with escorts, employees being asked to leave behind their cell phones and/or not take any notes when meeting with Pruitt, Pruitt himself making important phone calls from others' phones rather than his own, Pruitt requesting round-the-clock security by armed guards, etc.) is because "E.P.A. is legendary for being stocked with leftists.... If you work in a hostile environment, you’re not the one that's paranoid."[5]

As of the NYT article's publication in August 2017, Pruitt's LinkedIn profile still describes him as "a leading advocate against the EPA's activist agenda," and Pruitt "has made it clear that he sees his mission to be dismantling the agency's policies -- and even portions of the institution itself," according to the Times.[5]

Pruitt's EPA collected 60 percent less in civil penalties from polluters in the first six months of the Trump administration than the previous three administrations did in their first six months, according to a report published by the non-profit, non-partisan watchdog group Environmental Integrity Project (EIP).[6][7]

Pruitt's EPA collected $12 million in penalties from violators of the Clean Air Act, the Clean Water Act, and other environmental laws in that time period; but the three previous administrations "brought more cases and collected significantly more -- an average of $30 million -- in civil penalties by July 31 of each administration's first year," according to the report (see the table from the report below).[6]

"Trump campaigned on a promise of 'law and order,' but apparently law enforcement for big polluters is not what he had in mind," Eric Schaeffer, executive director of the Environmental Integrity Project and former director of civil enforcement at EPA, said in a press release.[8]

The Center for Media and Democracy, publishers of SourceWatch, sued Scott Pruitt in February 2017 for his office's failure to respond to Open Records requests. According to CMD's press release:

As a result of an Open Records Act request and lawsuit filed by the Center for Media and Democracy, on Tuesday night the Oklahoma Attorney General’s office released a batch of more than 7,500 pages of emails and other records it withheld prior to Scott Pruitt's nomination as EPA Administrator last Friday. The AG's office has withheld an undetermined number of additional documents as exempted or privileged and submitted them to the Judge Aletia Haynes Timmons for review. A number of other documents were redacted, and CMD will be asking for the court to review those as well. On February 27, the AG's office has been ordered to deliver records related to five outstanding requests by CMD.[9]

CMD analyzed the emails gained through the lawsuit and found:

Pruitt was the focus in a Pulitzer Prize winning New York Times' investigative series published in 2014, which examined how numerous Republican attorneys general, including Pruitt, formed secret alliances with energy corporations. Top findings on Pruitt, according to the series, included:

Pruitt has made statements that contradict mainstream scientific consensus on climate change:

As Attorney General of Oklahoma, Pruitt came to the defense of ExxonMobil, which is under investigation by Democratic state attorneys general on whether the company misled the public and its shareholders about the risks of climate change. The investigation came after two reports which revealed the company knew about the risks of climate change from its own scientific research, and then funded groups that denied climate risks.[15]

In his role as AG, Pruitt worked to block the Obama administration's regulatory action aimed to address climate change:

As a state legislator Pruitt was a member of the American Legislative Exchange Council (ALEC) where he chaired the "Civil Justice" task force.[23] "ALEC is unique in the sense that it puts legislators and companies together and they create policy collectively,” Pruitt said of ALEC in in an interview.[24]

Even after Pruitt became EPA Administrator and Oklahoma attorney general, Pruitt has stayed engaged with ALEC.

EPA Administrator Pruitt Does Conference Calls with ALEC and SPN

On May 18, 2017, Pruitt did a conference call with ALEC, the State Policy Network (SPN), and the Republican Governor's Public Policy Committee.[2] The purpose of the call is described in the schedule,

"Environmental Protection Agency Administrator Scott Pruitt provides an update on proposed changes to EPA policy and regulations and how they will impact states. Many people on this call were leading the Clean Power Plan push-back in their state and are advocates for devolving decision making to the local level."[2]

Pruitt's schedule between February and May 2017 can be viewed here.

Ties to the Kochs

Pruitt is closely tied to the billionaire Koch brothers. According to Follow the Money, Koch Industries was a top donor to Scott Pruitt when he ran for Oklahoma AG.[29] The Kochs Americans for Prosperity campaigned for Pruitt to be confirmed as EPA Administrator and praised his confirmation.[30]

Pruitt emails from his time as attorney general in Oklahoma reveal close communication between his office and the Koch network:[28]

"Frankly, I just assume the AG and Lankford talk sue and settle, how the EPA is deploying these tactics and what their respective offices have done on oversight and litigation, and let Yeatman from CEI give an objective analysis of costs to ratepayers from revised state implementation plan on regional haze (which includes the PSO rate increase). That way you guys don't have to deliver those messages and can focus on what the AG does best, opposing the Obama administration and its nasty tactics on the environment."[28]