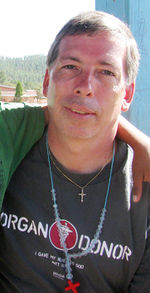 Richard A. "R.J." Johnson is a Republican political strategist who has been a top advisor to Wisconsin governor Scott Walker[1] and to the politically active dark money group Wisconsin Club for Growth.[2] Johnson also worked as a spokesperson and advisor to right-wing Wisconsin billionaire Terry Kohler for a number of years,[3] and Kohler contributed to various dark money groups run by Johnson.[4]

Johnson, described by Scott Walker as "my Karl Rove" in an email to Karl Rove asking for a million dollars for his recall campaign, was at the center of the 2012 (see timeline) bipartisan John Doe criminal investigation into potentially illegal campaign coordination between Walker's recall campaign committee and ostensibly independent groups, including groups controlled or advised by Johnson such as Wisconsin Club for Growth (WCFG) Citizens for a Strong America, Wisconsin Manufacturers and Commerce, American Federation for Children, Americans for Prosperity, Republican Governors Association, Republican State Leadership Committee.[7]

The investigation was shut down by the Wisconsin Supreme Court in July 2015 after two of the justices, Justice Gableman and Justice Prosser -- who were elected with huge expenditures by many of the Wisconsin groups under investigation -- refused to recuse by state prosecutors. It was later learned that Scott Walker and others credited Justice Gableman's 2008 electoral victory to the independent expenditures controlled by R.J. Johnson.[8]

During the 2011-2012 Wisconsin recall elections, Johnson was a paid consultant to both the Friends of Scott Walker campaign (FOSW) and Wisconsin Club for Growth, which spent an estimated $9.1 million on ads during the recalls[9] and funneled some $10 million more to other groups such as Citizens for a Strong America that ran ads, sent out mailers, and oversaw get-out-the-vote efforts.[10]

Prosecutors argued "that Walker's campaign and conservative groups illegally cooperated to help him and other Republicans," the Milwaukee Journal Sentinel reported in 2014. Johnson appeared in internal campaign emails that were made public at that time:

In the email, Doner wrote to Johnson that Walker wanted Wisconsin Club for Growth exclusively to coordinate campaign themes. "As the Governor discussed ... he wants all the issue advocacy efforts run thru one group to ensure correct messaging," she wrote.[11]

In another email, Walker described Johnson's central role in his campaign strategy to Karl Rove. As the Journal Sentinel reported, "The documents include an excerpt from an email in which Walker tells Karl Rove, former top adviser to President George W. Bush, that Johnson would lead the coordination campaign. Johnson also is Walker's longtime campaign strategist and the chief adviser to Wisconsin Club for Growth, a prominent conservative group.

"'Bottom-line: R.J. helps keep in place a team that is wildly successful in Wisconsin. We are running 9 recall elections and it will be like 9 congressional markets in every market in the state (and Twin Cities),' Walker wrote to Rove on May 4, 2011."[7]

The Wisconsin Supreme Court said in dismissing the John Doe that "the special prosecutor has not alleged any express advocacy." Yet prosecutors raised express advocacy explicitly in their filing with the court under the hard-to-miss header "Express Advocacy."[12]

They explained to the court how big groups like the Republican State Leadership Conference and the Republican Governors Association worked closely with the Walker campaign. Both groups registered formally as independent expenditure/express advocacy groups with the Wisconsin elections board and swore an oath saying they would not coordinate with Walker. RGA would spend $9.5 million in the Walker recall race on a barrage of ads that were the functional equivalent of express advocacy.[8]

Yet the Supreme Court ignored these facts, and when the special prosecutor asked to present more evidence, the court fired him and ordered the destruction of evidence.[8]

Court Ignored Evidence of Coordination with Express Advocacy Group: For instance: Prosecutors alleged that "FOSW and its agents were regularly conducting meetings/conference calls with RGA to discuss campaign strategy including polling. Governor Walker conducted phone calls and attended fundraising events coordinated by RGA."[8] The Guardian released emails from the investigation providing information that Keith Gilkes, Scott Walker's campaign manager, held weekly meetings with the Republican Governor's Association -- registered in the state as an "independent expenditure" group -- which had sworn an oath not to coordinate with Walker. On October 14, 2011, an RGA staffer wrote to Gilkes in an email, "Josh mentioned he would like to make this a recurring call on Fridays at 2:30 pm (EST). Does that work for you?" Gilkes replied, "This works on my end for a weekly call... Shoot me the phone number and dial-in when you have it."[13] Josh is likely Josh Robinson, RGA's political director, who later boasted of "overseeing the largest IE [Independent Expenditure] campaign defending Scott Walker during the 2012 recalls" in his bio. RGA spent $9.5 million in the recall election pounding Walker's opponent and lauding Walker. Many contend these ads were not "issue ads" but were the functional equivalent of express advocacy and prohibited even under the 2015 Wisconsin Supreme Court ruling shutting down the John Doe. Marquette Law Professor Ed Fallone pointed out in 2017 that a U.S. Supreme Court decision upholding a lower court ruling also makes clear that the Wisconsin Supreme Court plainly got it wrong when it ruled that so-called "issue ads" are exempt from regulation.[14]

The Wisconsin Supreme Court held that coordination with groups that run express advocacy ads or their functional equivalent was barred, yet the court failed to look at the many ads that qualified as express advocacy or its functional equivalent and fired the special prosecutor when he objected.[15] The coordination was apparent in the ads. "Forward—Walker, Backwards—Barrett" was a central theme in Walker campaign ads showing people walking backwards, clocks spinning backwards, etc., including this May 7, 2012 ad. Republican Governors Association ads had the same theme, as did adds by WMC-IMC and other smaller groups like Wisconsin Recall Action.[8] Many of these ads were the functional equivalent of express advocacy, say experts.[15]

Court Ignored Evidence of Coordination with Wisconsin Manufacturers and Commerce: Prosecutors believe that Governor Scott Walker raised $2 million for these Wisconsin Manufacturers and Commerce-IMC ads that were run in his 2012 recall race and that his top campaign aide, R.J. Johnson, may have been paid for placing them. Investigators say in the filings that bank records reflect wire transfers in April and May 2012 from WMC-IMC to Ten Capitol (the ad firm of WCM) totaling $3.7 million. "Coinciding with the wire transfers to Ten Capitol, WMC-IMC received payments from WiCFG," wrote prosecutors. "Consistent with a commission for ad placement, R.J. Johnson and Associates received $50,000 from Ten Capitol on June 22, 2012."[8] For prosecutors arguments, see [Stetler Affidavit], dated Oct. 1, 2013, published in the Guardian, Sept. 2016.

The conservative majority of the Wisconsin Supreme Court was elected with at least $10 million in spending by the groups under investigation. Many outside groups outspent the justices themselves. Two justices, Gableman and Prosser, were asked to recuse by prosecutors, but refused.[8]

A September 2016 expose by The Guardian shed new light on why prosecutors thought Gableman should recuse.[16]

In the full email from Scott Walker to Karl Rove on May 4, 2011 -- made available for the first time by The Guardian -- Walker wrote, "RJ was the chief advisor to my campaign. He pulled together the team who flipped the Senate three times and the Assembly two times. He ran the effort that defeat the first incumbent Supreme Court Justice for decade back in 2008 and Club for Growth -- Wisconsin was the key to retaining Justice Prosser."[17]

In the 2008 Supreme Court race, Justice Louis Butler was unseated by Michael Gableman in an ugly race where Wisconsin Club for Growth -- controlled by R.J. Johnson -- and Gableman's campaign ran ugly ads that generated official complaints.[18][19][20]

Several of the individuals who were under investigation in the John Doe have publicly characterized the probe as a partisan attack, including Johnson.

"Clearly there is no limit to how far these partisan prosecutors will go to in order to punish their political opponents," Johnson told Wisconsin Watchdog,[21] an outlet run by the Franklin Center for Government and Public Integrity (whose Director of Special Projects John Connors helped set up Citizens for a Strong America, which was also investigated in the John Doe).

Special Prosecutor Francis Schmitz, who headed the investigation, was shortlisted by Republican President George W. Bush for a U.S. Attorney position, was registered as a Republican in 2002, and in an official declaration to a U.S. District Court stated that he had in fact voted for Walker in the 2012 recall.[22] The investigation also involved District Attorneys from both the Republican and Democratic parties and was authorized by both Democratic and Republican judges.[23]

Johnson Cleared His Emails after 2010 Campaign

In comments made to the Wall Street Journal after a divided Wisconsin Supreme Court shut down the John Doe investigation, Johnson implied that he had purged his email account at the end of the 2010 campaign cycle. The Wisconsin State Journal described the comments:

"At the end of the session, Johnson said, Milwaukee Assistant District Attorney Bruce Landgraf asked him: 'Is there any reason at the end of the campaign you deleted all of your emails?' So I knew then I had been tracked all the way through, that they had been reading my emails."[24]

Johnson, his business partner Deborah Jordahl, and WCFG filed a lawsuit in October 2014 that challenged the legality of the John Doe probe, according to the Milwaukee Journal Sentinel.[25]

From 1986 to 1989, Johnson served as political director for the Republican Party of Florida.[26][5] By 1990, he had moved to the Republican National Committee (RNC), working as voter registration director, though his work was still based in Florida.[27]

Executive Director of the Republican Party of Wisconsin, 1990s

In 1991, Johnson moved to Wisconsin and took up the post of Executive Director of the Republican Party of Wisconsin (RPW).[28] The Wisconsin State Journal described Johnson as having strong ties to the national Republican Party and as highly qualified in the technical side of politics.[29] Johnson served as Executive Director of the RPW until 1997, and also served two short stints as Midwest Regional Political Director for the RNC between 1995 and 1997.[5]

After his time with the RPW, Johnson co-founded the consulting firm Eisner Johnson with William (Bill) Eisner, owner and CEO of the ad firm William Eisner & Associates (now known as Nonbox).[30] Eisner Johnson was the media firm for Steve Forbes' 2000 presidential campaign.[31]

While that firm was only in operation from 1999 to 2003,[5] Johnson continued to work closely with Eisner, often hiring Nonbox to place ads for political campaigns he oversaw.[31]

Other Clients and Campaigns