In August 2011, the Wisconsin Reporter was accused by State Democratic Party Spokesperson Graeme Zielinski of using off-record comments, butchering quotes and not correcting the record when it was called to its attention. The questionable quotation came from Zielinski as a response to Governor Scott Walker’s claim that the state had added more than half of the jobs created in the nation in June 2011. The article had supported this claim, but not the statement from the Democratic spokesperson.[5]

In February 2011, the outlet supported a poll that claimed 71% of Wisconsin residents thought Walker's budget proposal to cut the collective bargaining rights of most of the state's public sector workers was 'fair.'[6] The suspiciously high percentage caused some to question the source of the poll.[7]

As part of the application process to land a job at the Wisconsin Reporter, applicants must answer questions like: “How do free markets help the poor?” and “do higher taxes lead to balanced budgets?”[8]

The Wisconsin Reporter is a vehicle for promoting ideologically-based wire stories about state legislation and politics, and is a division of StateHouse News, a product of the Franklin Center for Government and Public Integrity. The Franklin Center is an ALEC member, sponsor, and exhibitor. The Franklin Center’s stated mission is "networking and training independent investigative reporters, as well as journalists from state based news organizations, public-policy institutions & watchdog groups."

The Nieman Journalism Lab at Harvard University wrote in 2010 that “critics have accused the Franklin Center, and its array of state-based websites, of purposefully half-reporting stories for a conservative gain.” Its bureaus, including the Wisconsin Reporter, function as a news wire service, and local newspapers across Wisconsin have reprinted the free Wisconsin Reporter wire news stories with no notice of their ideological slant.

During the Wisconsin protests over Walker’s budget in early 2011, the Wisconsin Reporter sponsored a questionable poll asserting that 71 percent of state residents thought the budget proposal to cut the collective bargaining rights of most of the state's public sector workers was “fair.” The result was a statistical outlier, leading some to question the source. The same month, We Ask America, largely owned by the business organization Illinois Manufacturing Association, conducted a similar poll surveying 2,400 Wisconsin residents and found that 52 percent opposed Walker's plan.

The Franklin Center was a “Vice-Chairman”-level sponsor of ALEC’s 2011 Annual Conference – which in 2010 equated to a $25,000 sponsorship fee – and was one of about 60 entities with booths in ALEC’s conference exhibition hall.

The Franklin Center receives part of its funding from the Bradley Foundation, which also has funded ALEC.[9]

In 2013, the Franklin Center's "Wisconsin Reporter" website published over a dozen articles aggressively attacking Wisconsin's "John Doe" probe into possible campaign finance violations during Wisconsin's 2011 and 2012 recall elections, and broke stories about the investigation. The Center for Media and Democracy (publishers of Sourcewatch.org) uncovered in December 2013 that the news outlet may have a conflict of interest, as "Franklin Center has close ties to individuals and groups that may be caught up in the John Doe."

Franklin Center/Wisconsin Reporter called its series on the John Doe "Wisconsin's Secret War," and cited "unnamed sources to reveal that Wisconsin Club for Growth, Americans for Prosperity, and Republican Governors Association had received subpoenas, and describing details about "after-hours visits to homes and offices" and prosecutors' "demands for phone, email and other records." [10]

Franklin Center/Wisconsin Reporter described the John Doe investigation as "an abuse of prosecutorial powers" with "the apparent goal of bringing down Gov. Scott Walker." However, the news outlet had what journalism professors called "a conflict of interest that minimally ought to be disclosed, whenever stories are written."

"The only name associated with the investigation, Eric O'Keefe, helped launch the Franklin Center's operations in 2009, and his Sam Adams Alliance group provided the majority of its startup budget; O'Keefe has spoken publicly about being subpoenaed in his capacity as director of Wisconsin Club for Growth. Franklin Center's Director of Special Projects John Connors, and the Executive Assistant to the President Claire Milbrandt, also have close ties to a group reportedly involved in the John Doe probe. Its former Director of Operations and General Counsel, James Skyles, worked with another group active in the Wisconsin recalls."[10]

John Menard, owner of the Menard's chain of hardware stores, gave $1.5 million in previously unknown contributions to Wisconsin Club for Growth during the 2012 Wisconsin recall election, according to reporting by investigative journalist Michael Isikoff published March 23, 2015. Isikoff wrote that the contributions "seem to have paid off for the businessman and his company." Over the following two years, Menard's received $1.8 million in tax credits from the Wisconsin Economic Development Corporation, which Walker chairs, and the Wisconsin Department of Natural Resources "sharply scaled back enforcement actions" under Walker.[11] The story made national headlines, including coverage by The New York Times, MSNBC, and U.S. News & World Report the day following its publication.[12]

Wisconsin Reporter, which had previously defended O'Keefe and Wisconsin Club for Growth against allegations of improper coordination with Walker and his campaign, made no mention of the pay-to-play allegations in the days following Isikoff's story despite the national news coverage, according to Media Matters. "Their silence on the story highlights the conflicts of interest that surround the outlet's reporting on Walker and the 'John Doe' investigations," Media Matters wrote.[12]

The Assault on Clean Election Laws: The Well-Funded Campaign to Legalize Coordination in Wisconsin and Nationwide

According to the press release relating to a report published by the Center for Media and Democracy in January 2015:[13][14]

A bipartisan effort to enforce Wisconsin's longstanding laws governing coordination between campaigns and independent groups has been mislabeled a "partisan witch hunt" by a well-funded legal and media campaign, with the ultimate goal of undermining what remains of limits on big money in politics, according to a new report from the Center for Media and Democracy (CMD):

"Anti-coordination laws have become more vital than ever before in the post-Citizens United world, where 'independent' political organizations are raising and spending unlimited funds for elections but keeping their donors a secret," said Brendan Fischer, CMD General Counsel and the author of the report. "If a candidate can coordinate with these secretly-funded groups and establish shadow campaign committees, then the candidate contribution limits and disclosure requirements are rendered meaningless."

And that, it seems, is precisely the goal:

"Proponents of more secret money in politics aim to use this case nationally to argue against common sense campaign laws designed to prevent corruption, and to intimidate regulators from enforcing the laws that remain on the books," said Lisa Graves, CMD's Executive Director.

How did an investigation led by Republicans and the state's nonpartisan Government Accountability Board get counter-factually recast as a politically-motivated "witch hunt" by Democrats against Republicans?

Key to the spin surrounding the probe has been the Franklin Center for Government and Public Integrity's "Wisconsin Reporter" website, which has produced more than 160 stories (and counting), but without routinely disclosing that it was launched and funded by Eric O'Keefe, Wisconsin Club for Growth's director and the chief plaintiff in the lawsuits challenging the probe. Nor has Franklin Center disclosed that its Director of Special Projects, John Connors, is also president of Citizens for a Strong America, another group facing criminal liability in the investigation and which is almost entirely funded by the Wisconsin Club for Growth (WiCFG).

The federal judge who issued an extraordinary ruling halting the investigation in May of 2014, Judge Rudolph Randa, cited to Franklin Center/Wisconsin Reporter stories as "evidence" that the investigation was politically motivated. Yet Judge Randa has his own issues: as the Center for Media and Democracy's PRWatch was first to report, he has regularly attended all-expenses-paid "judicial junkets" funded by, among others, the Charles G. Koch Charitable Foundation and the Lynde and Harry Bradley Foundation -- financial interests directly tied to the groups under investigation.

The future of the probe now rests with the Wisconsin Supreme Court, but some of those justices also face a significant conflict of interest: two of the primary groups potentially facing criminal liability in the probe, WiCFG and Wisconsin Manufacturers and Commerce, have been the dominant spenders in Wisconsin Supreme Court elections in recent years. They spent more than $10 million to elect the four justices in the Court's Republican majority, in most cases spending more than the candidates themselves.

In other words, the future of the investigation -- and with it, the future of Wisconsin's clean elections laws -- could be decided by justices who were elected to the bench by precisely the same organizations facing criminal liability.

CMD's report seeks to correct the record, describe how such a warped portrayal came into existence, and warn that if this attack on the enforcement of campaign finance laws is successful, it could have significant consequences for transparency and anti-corruption laws in elections in Wisconsin and around the nation.

Ties to the the Coalition for American Values

The Coalition for American Values (CAV) is a 501(c)(4) nonprofit whose only major activities have been spending $400,080 on ads supporting Wisconsin Governor Scott Walker in the final weeks of the 2012 recall elections. While the CAV did not disclose its funders at the time, tax filings later revealed that almost all of its funding in 2012 came from the Koch-tied Center to Protect Patient Rights, run by Koch operative Sean Noble.[15]

CAV's lawyer, James D. Skyles, was previously General Counsel and Director of Operations at the Franklin Center for Government and Public Integrity, which runs Wisconsin Reporter.[16]

The CAV's federal PAC has also paid money to a consulting firm run by John Connors, a leader of operations at the Franklin Center, and president of the group "Citizens for a Strong America," which was also active in the Wisconsin recall elections and kept its donors hidden, while operating out of a UPS drop box.[15] [17]

Additionally, as the Center for Media and Democracy reported,[18] "[t]he 'treasurer' listed on Coalition for American Values' FEC filings and the contact on its filings with Wisconsin's election board is Brent Downs. In 2008, when Connors chaired the Marquette College Republicans, Downs was his treasurer. Both were both students at Marquette University at the same time, and Downs, like Connors, also chaired the Students for Prosperity chapter of David Koch's Americans for Prosperity at Marquette University." 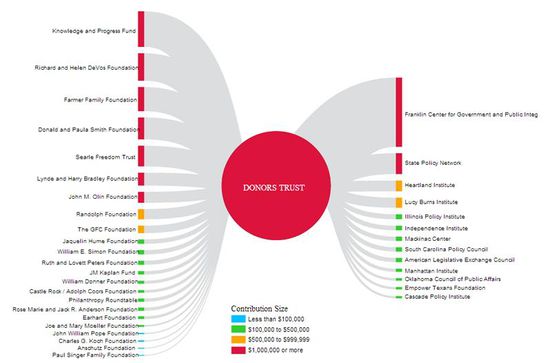 The Franklin Center was launched by the Chicago-based Sam Adams Alliance (SAM),[19] a 501(c)(3) devoted to pushing free-market ideals. SAM gets funding from the State Policy Network,[20] which is partially funded by The Claude R. Lambe Foundation.[21] Charles Koch, one of the billionaire brothers who co-own Koch Industries, sits on the board of this foundation.[22] SAM also receives funding from the Rodney Fund. The Franklin Center also receives funding from the Wisconsin-based Lynde and Harry Bradley Foundation,[23] a conservative grant-making organization.[24]

Franklin Center Director of Communications Michael Moroney told the Center for Public Integrity (CPI) in 2013 that the source of the Franklin Center's funding "is 100 percent anonymous." But 95 percent of its 2011 funding came from DonorsTrust, a spin-off of the Philanthropy Roundtable that functions as a large "donor-advised fund," cloaking the identity of donors to right-wing causes across the country (CPI did a review of Franklin's Internal Revenue Service records).[25] Mother Jones called DonorsTrust "the dark-money ATM of the conservative movement" in a February 2013 article.[26] Franklin received DonorTrust's second-largest donation in 2011.[25]