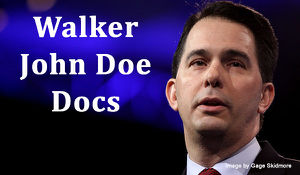 With this webpage, Sourcewatch has attempted to gather publicly available documents on the two "John Doe" criminal investigations involving Scott Walker and his associates. The investigations have been conducted under Wisconsin’s "John Doe" statute, a closed-door investigatory process overseen by a judge that allows prosecutors to compel people to testify and produce documents. It is analogous to a grand jury investigation, but conducted in front of a judge rather than a jury.  Grand Juries are rarely used in Wisconsin, but John Does are commonly used to conduct investigations in a variety of cases.

John Doe II: In February 2012, another John Doe investigation (referred to as "John Doe II") was authorized by Judge Barbara Kluka to investigate potentially illegal campaign coordination between Friends of Scott Walker and outside groups during the 2011-2012 recall elections. Because this investigation involved individuals who lived in five counties across the state, the probe has involved five District Attorneys, from both the Republican and Democratic parties, and has been authorized by both Republican and Democratic judges. A special prosecutor was appointed to lead the multi-county investigation, veteran federal prosecutor Francis Schmitz, a Republican who voted for Walker in 2012.[2] As of May 2015, the case is before the Wisconsin Supreme Court.

This report was unsealed by order of the John Doe judge on December 6, 2017.

Letter from the Ethics Commission to the Attorney General, December 12, 2017

The respected former head of the Wisconsin Government Accountability Board, Gerald C. Nichol a retired judge, summarized the John Doe case in a 2017 Wisconsin State Journal article suggesting that Wisconsin's judicial recusal laws needed to be tightened to avoid the appearance of corruption and restore faith in the courts. Nichol writes,

"After reviewing the evidence brought to the GAB by the Milwaukee DA, the GAB unanimously voted to conduct an investigation. This evidence documented that the governor solicited various wealthy individuals for millions of dollars, directing contributors to make their donations to Wisconsin Club for Growth 501c4 and not to the Friends of Scott Walker. By doing this, individuals’ identities would not be revealed, and their contributions would not be made public. Evidence also revealed people were retained or employed by both of these political fundraising organizations. This strategy ensured consistent messaging to the public. The GAB, which the Legislature later abolished, hired a retired assistant U. S. attorney to lead the investigation."[3]

Although the "John Doe II" campaign finance probe has been conducted under strict secrecy orders, some documents pertaining to the investigation have become public as the result of a federal lawsuit filed by Wisconsin Club for Growth.

Brief of The Center for Media and Democracy, The Brennan Center for Justice, and Common Cause as Amici Curiae in Support of a Petition for a Writ of Certiorari to the Supreme Court of the State of Wisconsin, June 22, 2016

Brad Schimel Files Brief in Opposition to a Petition for a Writ of Certiorari to the Supreme Court of Wisconsin, August 16, 2016

Brief of Constitutional Accountability Center as Amicus Curiae in Support of a Petition for a Writ of Certiorari to the Supreme Court of the State of Wisconsin, August 15, 2016

Brad Schimel Brief in Opposition to the Petition for a Writ of Certiorari to the Supreme Court of Wisconsin, November 11, 2015

The Wisconsin Supreme Court said in dismissing the John Doe in 2015 that "the special prosecutor has not alleged any express advocacy." Yet prosecutors raised express advocacy explicitly in their filing with the court under the hard-to-miss header "Express Advocacy."[4]

They explained to the court how big groups like the Republican State Leadership Conference and the Republican Governors Association worked closely with the Walker campaign. Both groups registered formally as independent expenditure/express advocacy groups with the Wisconsin elections board and swore an oath saying they would not coordinate with Walker. RGA would spend $9.5 million in the Walker recall race on a barrage of ads that were the functional equivalent of express advocacy.[5]

Yet the Supreme Court ignored these facts, and when the special prosecutor asked to present more evidence, the court fired him and ordered the destruction of evidence.[5]

For instance: Prosecutors alleged that "FOSW and its agents were regularly conducting meetings/conference calls with RGA to discuss campaign strategy including polling. Governor Walker conducted phone calls and attended fundraising events coordinated by RGA."[5] The Guardian released emails from the investigation providing information that Keith Gilkes, Scott Walker's campaign manager, held weekly meetings with the Republican Governors Association -- registered in the state as an "independent expenditure" group -- which had sworn an oath not to coordinate with Walker. On October 14, 2011, an RGA staffer wrote to Gilkes in an email, "Josh mentioned he would like to make this a recurring call on Fridays at 2:30 pm (EST). Does that work for you?" Gilkes replied, "This works on my end for a weekly call... Shoot me the phone number and dial-in when you have it."[6] Josh is likely Josh Robinson, RGA's political director, who later boasted of "overseeing the largest IE [Independent Expenditure] campaign defending Scott Walker during the 2012 recalls" in his bio. RGA spent $9.5 million in the recall election pounding Walker's opponent and lauding Walker. Many contend these ads were not "issue ads" but were the functional equivalent of express advocacy and prohibited even under the 2015 Wisconsin Supreme Court ruling shutting down the John Doe. Marquette Law Professor Ed Fallone pointed out in 2017 that a U.S. Supreme Court decision upholding a lower court ruling also makes clear that the Wisconsin Supreme Court plainly got it wrong when it ruled that so-called "issue ads" are exempt from regulation.[7]

The Wisconsin Supreme Court held that coordination with groups that run express advocacy ads or their functional equivalent was barred, yet the court failed to look at the many ads that qualified as express advocacy or its functional equivalent and fired the special prosecutor when he objected.[8] The coordination was apparent in the ads. "Forward—Walker, Backwards—Barrett" was a central theme in Walker campaign ads showing people walking backwards, clocks spinning backwards, etc., including this May 7, 2012 ad. Republican Governors Association ads had the same theme, as did adds by WMC-IMC and other smaller groups like Wisconsin Recall Action.[5] Many of these ads were the functional equivalent of express advocacy, say experts.[8]

Prosecutors believe that Governor Scott Walker raised $2 million for these Wisconsin Manufacturers and Commerce-IMC ads that were run in his 2012 recall race and that his top campaign aide, R.J. Johnson, may have been paid for placing them. Investigators say in the filings that bank records reflect wire transfers in April and May 2012 from WMC-IMC to Ten Capitol (the ad firm of WCM) totaling $3.7 million. "Coinciding with the wire transfers to Ten Capitol, WMC-IMC received payments from WiCFG," wrote prosecutors. "Consistent with a commission for ad placement, R.J. Johnson and Associates received $50,000 from Ten Capitol on June 22, 2012."[5]

The conservative majority of the Wisconsin Supreme Court was elected with at least $10 million in spending by the groups under investigation. Many outside groups outspent the justices themselves. Two justices, Gableman and Prosser, were asked to recuse by prosecutors, but refused.[5]

A September 2016 expose by The Guardian shed new light on why prosecutors thought Gableman should recuse.[9]

In the full email from Scott Walker to Karl Rove on May 4, 2011 -- made available for the first time by The Guardian -- Walker wrote, "RJ was the chief advisor to my campaign. He pulled together the team who flipped the Senate three times and the Assembly two times. He ran the effort that defeat the first incumbent Supreme Court Justice for decade back in 2008 and Club for Growth -- Wisconsin was the key to retaining Justice Prosser."[10]

In the 2008 Supreme Court race, Justice Louis Butler was unseated by Michael Gableman in an ugly race where isconsin Club for Growth -- controlled by R.J. Johnson -- and Gableman's campaign ran ugly ads that generated official complaints.[11][12][13]

Unnamed Movant No. 6's Memorandum in Opposition to Intervenor's Motion to Amend the Secrecy Orders, February 1, 2016

Unnamed Movant No. 2, 7 and 8's Memorandum in Opposition to Intervenor's Motion to Amend the Secrecy Order, February 1, 2016

The MacIver Institute is a Bradley-funded "think tank" and member of the State Policy Network in Wisconsin run by former GOP operative Brett Healy. MacIver sued Milwaukee DA John Chisholm and other state prosecutors pursuing the John Doe case against Scott Walker while Chisholm was running for re-election. MacIver was represented by Wisconsin Club for Growth's Eric O'Keefe's law firm. In the suit, MacIver claimed Chisholm and investigators at the Government Accountability Board illegally seized their digital records, violating the federal Stored Communications Act. Email correspondence between MacIver's staff and members of the Walker administration were part of a set of John Doe documents leaked to the Guardian newspaper in September 2016. The Guardian Leak: 1,500 Pages of Documents Pertaining to the John Doe II Investigation, September 14, 2016

U.S. District Judge William Conley ruled that the group of investigators properly obtained search warrants for emails from the John K. MacIver Institute as part of the lengthy John Doe investigation, on March 15, 2017. The conservative United States Court of Appeals for the Seventh Circuit upheld this ruling on March 22, 2018. Case documents below.

Memorandum in Support of Motion to Dismiss the Amended Complaint, On Behalf of Defendants John Chisholm, David Robles, and Bruce Landgraf

Discovery Documents from John Doe I

Defendants' Brief in Support of Motion for Summary Judgment

Affidavit of Sharrie Hauge in Support of Motion for Summary Judgment

Affidavit of Paul Schwarzenbart in Support of Motion for Summary Judgment

Affidavit of Kevin Kennedy in Support of Motion for Summary Judgment

Affidavit of Jonathan Becker in Support of Motion for Summary Judgment

Affidavit of Gerald Nichol in Support of Motion for Summary Judgment

Affidavit of Francis Schmitz in Support of Motion for Summary Judgment

Affidavit of Paul Schwarzenbart in Support of Motion for Protective Order

Affidavit of Paul W. Schwarzenbart in Support of Defendents' Motion for Summary Judgement

Affidavit of Kevin J. Kennedy in Support of Defendents' Motion for Summary Judgment

Affidavit of Francis D. Schmitz in Support of Defendants' Motion for Summary Judgment

Plaintiffs' Notice of Motion and Motion to Compel

Supplemental Brief of Robert Stelter in Support of Motion to Quash

Notice of Motion Filed under Seal

Exhibit A to Motion to Compel

Exhibit B to Motion to Compel

Exhibit C to Motion to Compel

Plaintiffs' Notice of Motion and Motion for Relief from Local Rule 5.5 as to Plaintiffs' Cross-Motion to Compel

Response to Subpoena Duces Tecum to Corporate Representative-DIFS, LLC's Response to Request for Production of Documents

After John Doe I was closed, Wisconsin media organizations sought records pertaining to the investigation under the state's Public Records Law. [14] In September of 2013, Judge Nettesheim ordered the release of the records. [15]