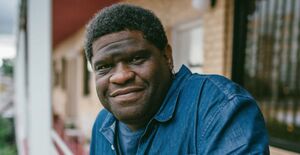 Gary Younge is an author, editor-at-large at The Guardian, columnist at The Nation, and author of several books, most recently Another Day in the Death of America: A Chronicle of Ten Short Lives.

Younge America: the View from Roanoak

Immediately preceding the 2008 presidential election between Barack Obama and John McCain, Younge spent a month in Roanoak, Virginia. He wanted to visit "a relatively small town in a swing state which, given the historic nature of Barack Obama's candidacy, has a sizeable African-American population... where both sides had work to do if they were to shore up their base, and there was everything to play for."[1]

In his introductory piece about his travel to Roanoak, Younge explained his wish to visit a swing-state rather than staying somewhere such as New York, Los Angeles, or San Francisco. According to him, "the political conversations that take place [in the U.S.'s cosmopolitan coastal cities] are far less diverse and varied than elsewhere in the country. [These cities' residents] refer to the rest of the country as the fly-over states- the inconvenient electoral truth in between New York and Los Angeles- deriding them for their obsession with guns, god and gays."[1]

Throughout his stay in Roanoak, Younge visited a Presbyterian community center,[2] discussed healthcare, high rates of uninsured Americans, and medical bankruptcies,[3] met with leaders of Roanoak's black community,[4] and marveled at the "eccentric" residents of the town.[5]

During his stay, he met "a man dressed as a Viking. His beard was plaited and he had an Obama sticker on his helmet. He said the woman with him was not his girlfriend, she just made his mead. It's not that people didn't notice, but the fact he was dressed as a Viking didn't seem to come up in any conversation. When I brought it up it was like I was the strange one."[5] Among other residents, Younge also came across an "Obama supporter who wouldn't hear a bad word said about the confederate general Robert E Lee" and a "Nader voter who brandished a gun in my direction.[5]

The View from Middletown

In 2016, Younge repeated his month-long study of an American town before a presidential election, this time in Muncie, Indiana. Younge chose this town because it lies within Delaware County, which voted for both Bernie Sanders and Donald Trump in the primaries and also because it is the home of an influential sociological study of American life called "Middletown".[6] Additionally, although Indiana is a reliably red state, Delaware county voted twice for both George W. Bush and Barack Obama.[7] In Muncie, Younge set out to "visit the food banks, gun ranges, churches and gay bars to talk to its teachers, preachers, cops and kids. To find out not just how people will vote but what they are thinking, and not just who will win but what, if anything, might change."[7]

Younge commented on Indiana's fraught racial past during the time of the Middletown study, noting how "the experiences of people like Johnson [an African-American pastor who risked his life to give lynching victims a proper burial] and many of those who stood with him that day, are omitted from the “typical” American story of Middletown.[8]

Among other issues, Young interviewed progressive Bernie Sanders supporters who did not show the same enthusiasm for Hillary Clinton,[9] presented a photo essay of abandoned factories,[10] discussed Trump's appeal,[11], looked into the issue of gender in politics,[12] and assembled testimonials from a wide variety of locals.[13]

In 2015, Younge traveled to Louisville, Kentucky, where same-sex marriage was banned at the time. There, Younge talked to Christian Kentuckians on both sides of the issue. His interviews included a Catholic gay couple who married in nearby Indiana, Baptist parents of a gay son who struggled to square their Christian beliefs and their love and support for him, ministers, a theologian, and members of a Baptist Church who performed same-sex marriage against the wishes of the Baptist establishments.[14]

"Objections at the Wedding" won the Radio Times Faith Award for religious broadcasting in 2016.[15]

In 2003, Younge became the Guardian's U.S. correspondent and reported from New York and Chicago before returning to London in 2015.[16][19]

Younge attended Heriot-Watt University in Edinburgh, where he studied French and Russian. During his final year of university, he was awarded a bursary from The Guardian, where he began work in 1993.[16]