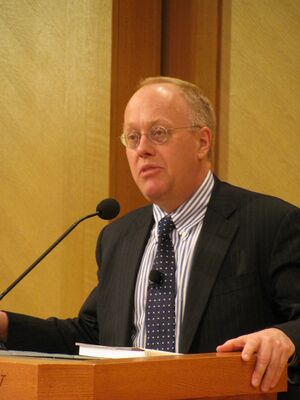 Chris Hedges (born September 18, 1956) is an author, journalist, Presbyterian minister, television show host and university teacher. He is a columnist at Truthdig[1] and hosts a show on Russia Times America called "On Contact".[2] Hedges has appeared on C-SPAN,[3] MSNBC,[4][5][6] and Democracy Now!.[7]

Hedges often writes in apocalyptic terms, describing how human civilization is caught between the climate crisis and uncaring "ruling elites".

A 2019 piece highlighted the group Extinction Rebellion, claiming their non-violent shutdowns and other protests represented the "only mechanism left to force action by the ruling elites, who, although global warming has been well documented for at least three decades, have refused to carry out the measures needed to protect the planet and the human race."[8]

A later 2019 piece echoed the need for direct nonviolent protests, saying "Voting, lobbying, petitioning and protesting to induce the ruling elites to respond rationally to the climate catastrophe have proved no more effective than scrofula victims’ appeals to Henry VIII to cure them with a royal touch."[9]. Hedges argued that both major political parties serve corporations instead of everyday people, pointing out how Barack Obama was president during the Dakota Access Oil Pipeline (DAPL) protests and "opened offshore drilling to American oil companies as if he were Sarah Palin."[9] Hedges also called for nonviolent protests to incite a revolution, saying "Refusal to participate in the further destruction of the planet means a rupture with traditional politics. It means noncooperation with authority. It means defying in every nonviolent way possible consumer capitalism, militarism and imperialism. It means adjusting our lifestyle, including becoming vegans, to thwart the forces bent upon our annihilation. And it means waves of sustained civil disobedience until the machine is broken."[9]

In a 2019 piece, Hedges imagined the end of humanity, saying "The air, water and ice have seriously degraded under the onslaught as the planet shifts from one climate to another, a climate that will no longer be hospitable to human habitation... The only existential question left is how we will choose to wait out the finale. But to pose that question is to defy the cultural mania for hope, the yearning for collective self-delusion."[10]

Another 2019 piece imagined the fall of the United States and predicted a dystopia where the negative aspects of American society in 2019 would be heightened: In this dystopic future, Hedges described "harsh legal and physical forms of control to stymie... widespread popular unrest",[11] the banning of abortion, the overuse of the death penalty, and a white supremacist view of history overtaking the educational system. He also described how "ruling oligarchs" will have "access to basic services, health care, education, water, electricity and security largely denied to the wider population."[11] He also imagined that "The mass media will become nakedly Orwellian, chatting endlessly about a bright future and pretending America remains a great superpower."[11] In terms of criminality and other human suffering, he preordained that "Hate groups and hate crimes will proliferate and be tacitly empowered and condoned by the state. Mass shootings will be commonplace. The weak— especially children, women, the disabled, the sick and the elderly—will be exploited, abandoned or abused. The strong will be omnipotent."[11]

A 2018 piece featured insights from an astrophysics professor who used the climate history of other planets, such as Venus and Mars, to inform his prediction of the worst case climate change scenarios. As the professor described, "The water on Venus got lost slowly... The CO2 built up. There was no way to take it out of the atmosphere. It gets hotter. The fact that it gets hotter makes it even hotter. Which makes it even hotter... This is the greatest fear. This is why we don’t want to go past 2 degrees [Celsius] of climate change. We’re scared that once you get past 2 degrees, the planet’s own internal mechanisms kick in. The population comes down like a stone. A complete collapse. You lose the civilization entirely."[12]

In a 2017 piece, Hedges claims "We are entering this final phase of civilization",[13] predicting a future where "National economies will go into tailspins as wider and wider parts of the globe suffer catastrophic systems breakdown. Central authority and basic services will increasingly be nonexistent. Hundreds of millions of people, desperate for food, water and security, will become climate refugees. Nuclear power plants... will face meltdowns [and] spew radioactive waste into the sea and air. Exacerbated by disintegration of the polar ice caps, the catastrophes will be too overwhelming to manage."[13] He also includes several apocalyptic quotations from Jeff Goodell, the author of The Water Will Come: Rising Seas, Sinking Cities and the Remaking of the Civilized World. Hedges concludes his piece with a Goodell quotation foreseeing that, as water levels rise, "Kids will get strange rashes and fevers. More people will leave [low areas]. Seawalls will crumble. In a few decades, low-lying neighborhoods will be knee-deep. Wooden houses will collapse into a sea of soda bottles, laundry detergent jugs, and plastic toothbrushes. Human bones, floated out of caskets, will be a common sight. Treasure hunters will kayak in, using small robotic submersibles to search for coins and jewelry. Modern office buildings and condo towers will lean as salt water corrodes the concrete foundations and eats away at the structural beams. Fish will school in the classrooms. Oysters will grow on submerged light poles. Religious leaders will blame sinners for the drowning of the city."[13]

After a debate over religion with then-fellow Truthdig contributor, atheist, and Islam critic Sam Harris, Hedges released his opening statement in the form of a column entitled "I Don't Believe in Atheists".[14] In this piece, Hedges claimed, "[Harris] attacks superstition, a belief in magic and the childish notion of an anthropomorphic God that is characteristic of the tribe, of the closed society. He calls this religion. I do not."[14] Hedges also criticized Harris for claiming in his book The End of Faith "We are at war with Islam... precisely the vision of life that is prescribed to all Muslims in the Koran, and further elaborated in the literature of the hadith, which recounts the sayings and teachings of the Prophet”,[14] saying that the Koran "unequivocally condemns attacks on civilians as a violation of Islam",[14] that suicide bombing was originated by Hindu Tamils, and that some of the worlds worst genocides and crimes against humanity were committed by Christian, not Muslim, perpetrators. Finally, Hedges criticized Harris for endorsing torture in a "ticking time bomb" scenario, saying "Harris cannot give us a legal or historical precedent where such a case... actually happened."[14]

Harris responded in a subsequent article, saying "According to recent polls, 53 percent of Americans think that the universe is less than 10,000 years old and 59 percent believe that Jesus will one day return to Earth wielding magic powers — and yet, religious moderates like Hedges invariably accuse me of 'caricaturing' Christianity whenever I criticize these beliefs."[15] After accusing Hedges of using "selective quotation to make me appear to hold positions which I do not hold",[15] Harris linked to a blog post where he explains his controversy-causing beliefs in his own words.

The two writers clashed again in 2011 after the Anders Breivik massacre in Norway. Hedges accused Harris and fellow New Atheist Christopher Hitchens of fundamentalism and claimed, "Our religious and secular fundamentalists all peddle the same racist filth and intolerance that infected Breivik."[16] Hedges included more quotations from Harris's The End of Faith, including one that argued "if an Islamist regime, which grows dewy-eyed at the mere mention of paradise, ever acquires long-range nuclear weaponry... [the] only thing likely to ensure our survival may be a nuclear first strike of our own"[16] and another, where Harris claimed “Islam, more than any other religion human beings have devised, has all the makings of a thoroughgoing cult of death.”[16]

In response, Harris laid out the many times Hedges has accused him of calling for "a nuclear first strike on the Arab world" without providing greater context, saying "Wherever they appear, Hedges’ comments seem calculated to leave the impression that I want the U.S. government to start killing Muslims by the millions."[17] Harris included the full passage explaining preventative nuclear war from his book, saying "I will let the reader judge whether this award-winning journalist has represented my views fairly."[17] Harris also responded to Hedges claim that he trafficked in "racist filth", saying "My antipathy toward Islam— which is, in truth, difficult to exaggerate— applies to ideas, not to people, and certainly not to the color of a person’s skin."[17] He also claimed "As I regularly emphasize when discussing Islam, no one is suffering under the doctrine of Islam more than Muslims are—particularly Muslim women."[17] Finally, Harris sharply criticized Hedges, saying "Hedges is the one person I have told event organizers that I will not appear with again for any reason... The man is not only wrong in his convictions, but dishonest— and determined to remain so. I trust this is a consequence of his most conspicuous quality as a person: sanctimony. There is a main vein of sanctimony in this universe, and it appears to run directly through the brain of Chris Hedges."[17]

Hedges has a B.A. in English literature from Colgate University, a Master of Divinity degree from Harvard University and an honorary doctorate from the Starr King School for the Ministry.

Hedges was a foreign correspondent in Central America, the Middle East, Africa and the Balkans for over 15 years, reporting from over 50 countries for The Christian Science Monitor, National Public Radio, The Dallas Morning News and The New York Times.

Hedges has taught at Columbia University, New York University, Princeton University and the University of Toronto. He also teaches classes at East Jersey State Prison in Rahway, N.J.. A drama class Hedges taught there led to the production of a play called Caged, collaboratively written by 28 inmates that were his students.[22][23][24][25]

In an April 2019 interview on RT America, Hedges was named alongside Matt Taibbi, Glenn Greenwald, Noam Chomsky and Aaron Maté, as one of many "highly-respected journalists, writers and thinkers, who have been saying for months now that the Russiagate investigation and the fascination about the downright obsession of it by the U.S. corporate media elites is maybe overstated, if not possibly even irresponsible."[26] Hedges had interviewed fellow Russiagate skeptic Aaron Maté on his own Russia Times show earlier that April.[27]

Hedges was one of the New York Times journalists who wrote for "A Nation Challenged", a special section of the newspaper devoted to covering the aftermath of the September 11, 2001 attacks. In 2002, the NYT won a Pulitzer Prize for this section.[28]

In 2002, he received the Amnesty International Global Award for Human Rights Journalism.[20]