Weeks of public protest followed a controversial "budget repair bill" that Republican Governor Scott Walker introduced, February 11, 2011. Collective bargaining for public workers started in Wisconsin 50 years ago. For unions, the heart of the controversy was not the health care and pension contributions contained in the bill, but the direct attack on the ability of unions to organize and collectively bargain. A series of measures in the budget repair bill, including annual re-certification of unions with a majority of all eligible voters (not just a majority of those voting), will make it difficult for unions to function or effectively represent workers.

See also Timeline of the 2011 Occupation of the Wisconsin State Capitol. 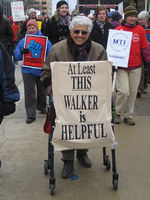 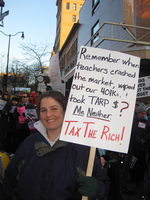 *March 4, 2011 Gov. Scott Walker threatened to send out 1,500 layoff notices to state employees if the budget repair bill did not pass.[41] 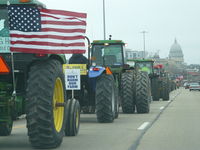 *June 2, 2011 Around 100 tents were set up around the capitol building to create a tent city called “Walkerville.” Organizers were granted a permit to stay until June 20.[57] 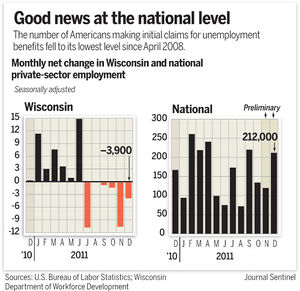 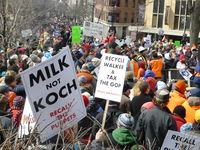 Fight & Win
Could President Obama Be Talking about Scott Walker?

Beginning on February 14, 2011 the Center for Media and Democracy reporters provided live coverage of the historic protests in Madison, Wisconsin and related legal and political battles. The coverage focused on the corporations and spinmeisters pulling the strings including the involvement of the Koch Brothers Americans for Prosperity Group and Wisconsin Club for Growth. The Center for Media and Democracy ended their daily live coverage on July 13, 2011 and these columns are archived here. [92]