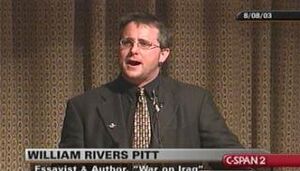 William Rivers Pitt (born November 9, 1971) is a teacher, writer, political activist and author of several books, including the bestseller War on Iraq: What Team Bush Doesn't Want You to Know.[1] He currently works at Truthout, where he is the senior editor and lead columnist.[1][2]

According to a 2003 review in The Guardian, former U.N. weapons inspector "Scott Ritter's long interview with William Rivers Pitt in War on Iraq is the most comprehensive independent analysis of the state of knowledge about Iraq's weapons programmes [sic] until the new team of inspectors went back. Point by point, Ritter deals with every suspicion, and concludes that any chemical or biological weapons Saddam might have concealed from the UN inspectors before they pulled out would by now have degraded and become useless. Any attempts to build nuclear weapons or missiles and aircraft to deliver them would have been detected by satellites."[3]

In multiple pieces, Pitt shed light on the sheer cost of war and military machines and equipment. In a 2019 article, Pitt compared the amount of money the U.S. government spends on war to the amount it could be spending on Medicare for All and other social programs. "The price of a single B-21 bomber could fully fund Meals on Wheels for more than 65 years. The cost of the F-35 Joint Strike fighter program could fund the Supplemental Nutrition Assistance Program (SNAP) program for more than 22 years. The cost of the 'war on terror' could fund the Temporary Assistance for Needy Families (TANF) program for more than 345 years. According to the House Medicare for All caucus, that program will cost somewhere between $28-32 trillion over 10 years. That comes out to about $3 trillion per year, which means the 'war on terror' budget alone could have covered the first two years. Add more than six months to that with the F-35 and B-21 funding, and we’re just getting started."[4]

Another 2019 article drew attention to the $1.5 trillion price tag of a single fighter jet, the F-35. Again, Pitt listed ways the U.S. government could instead spend this large sum of money, saying, "I could regale you, dear reader, with a litany of things that $1.5 trillion would better serve– actual and affordable health care, children’s reading programs, fighting hunger, combating poverty, providing homeless assistance, enhancing elder services, properly funding green energy research, job training, pollution cleanup, storm and flood preparation, along with vital infrastructure necessities like roads, schools, hospitals and high-speed rail, to name but a scant few. Instead, that money goes to the shabby manufacture of dysfunctional war machines that may never work, right alongside all the ones that work too well."[5]

In a 2014 Truthout interview, Pitt called war "an incredibly lucrative process... for a few companies, about 5,000 people."[6] He pointed out that "every bullet fired, every meal eaten, every gallon of fuel used, every rocket fired, every rifle procured, every body bag filled, every uniform worn, costs money. And that money is tax dollars spent by the government and paid to people that you and I will unfortunately never get to meet."[6]

In a September 11, 2019 piece, Pitt interpreted the meaning behind the phrase "Never Forget", saying "The powers that be told us to 'Never Forget' for one overarching reason: to feed the fires of permanent war (and the ocean of money that comes with it). 'Never Forget' meant 'always be afraid, and always be angry', because political opportunism and the profit motive are furnaces ever in need of feeding, and wrath makes for powerful fuel."[7]

Pitt also drew attention to the anti-Muslim and anti-immigrant backlash American society experienced after the September 11, 2001 attacks. He pointed out direct connections between this xenophobia and the actions of the Trump administration, saying, "The orchestrated racism in the aftermath of September 11 made it possible for Trump adviser and vivid fascist Stephen Miller to lance the boil of his own bigotry and pour it into the bloodstream of an already infected country."[7] Pitt blamed the mindset of "Never Forget" for "children in cages, the concentration camps, the anti-Muslim travel bans, the violence of Trump-inspired white nationalists armed with weapons of war, the active malice directed at all migrants not of European descent, [and] the mortal peril baked into interactions between people of color and the white police state..."[7]

In a 2019 op-ed, Pitt drew on a Washington Post-ABC News poll, which found, among other things, that 72% of American adults believed "the political system mainly works to benefit those in power" and 62% believed "the economic system mainly works to benefit those in power.[8] According to Pitt, these majorities represent "a coalition of voters who could, if properly organized and motivated, win any election put in front of them by historic margins."[9] Again drawing on the polls, he wondered, "Why, then, is the Democratic Establishment so bound and determine to foist yet another right-bent 'centrist' nominee on an electorate that sees through the economic fraud being foisted on them..."[9] Pitt claimed Democrats such as Bill Clinton "and Hillary Clinton, Barack Obama, Nancy Pelosi, Joe Biden, [and] Dianne Feinstein" were "deeply complicit in causing the anger underscored by that Post/ABC poll", saying "They were, and remain, groomsmen and bridesmaids at the unholy union between Republican Party greed and Democratic Party fears."[9]

Pitt studied at the College of the Holy Cross in Worcester, Massachusetts.[15]

Pitt was a high school English teacher before he became an full-time political writer and activist in 2003.[1]