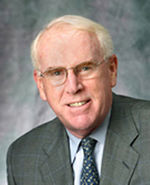 Vic Fazio is a former member of Congress (1979-1999), Chairman of the Democratic Caucus, and Chairman of the Democratic Congressional Campaign Committee. He works as a corporate lobbyist. He has lobbied for AT&T, Corrections Corporation of America, Archer Daniels Midland, Shell Oil, Blumberg Capital, the Private Equity Growth Capital Council, Dow Chemical, the U.S. Chamber of Commerce Institute for Legal Reform, and Waste Management.[1]

Fazio is on the board of Fix the Debt’s parent organization, the Committee for a Responsible Federal Budget (CRFB), and is listed as being on the Steering Committee of the Campaign to Fix the Debt.[2]

Fazio works for Akin Gump, where he has lobbied against HR 2834, Rep. Sander Levin’s bill to tax private equity and hedge fund income at higher regular rates rather than at the 15 percent capital gains rate. The finance industry has fiercely fought this effort, despite its vague commitment to raising "revenue" in campaigns such as Fix the Debt. In this "carried interest" tax rate battle, Fazio has represented the Private Equity Growth Capital Council[3] and private equity firms KKR and Apollo Advisers (now Apollo Global Management). Akin Gump also lobbied on behalf of many corporations on tax and appropriations issues including KKR[4] and Private Equity Growth Capital Council[5] on tax reform and issues affecting private equity.

Fazio is also on the board of directors of Northrop Grumman (annual compensation of $304,347 in 2011[6]),[7] a major defense contractor and funder of ALEC that would benefit from the corporate tax rate cut proposed by Fix the Debt; of insurance company W. R. Berkley Corporation’s Peyton Street Independent Financial Services; and of Fix the Debt’s parent organization, the Peterson-funded Committee for a Responsible Federal Budget.[8] Northrop Grumman companies received $9.5 billion in Department of Defense contracts in 2012, making it one of the top 10 corporate recipients of defense contracts in 2012.[9] It lobbied on defense spending and tax credit issues in the third quarter of 2012.[10]