With regard to Fix the Debt and its many partner organizations, the National Journal observed, "Singlehandedly, Peterson has created a loose network of deficit hawk organizations that seem independent but that all spout the Peterson-sanctioned message of a 'grand bargain.'" This echo chamber has an impact on the debate in Washington, D.C. Peterson "has empowered those working on the issue because he has funded them," Michael Ettlinger, vice president for economic policy at the Center for American Progress (CAP), told the National Journal. "That has an effect because those voices get amplified, and it affects the atmospherics."[2] 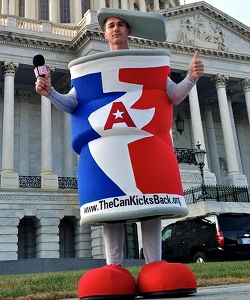 Fix the Debt is listed as a "project of" the Committee for a Responsible Federal Budget (CRFB) on the organization's website as of February 2013. CRFB is itself a project of the New America Foundation (NAF). The Peter G. Peterson Foundation gave NAF $2,050,000 from 2009 to 2011.[3] CRFB used to be an independent organization, but became associated with NAF in 2003.[7]

NAF is also funded by many of the top Fortune 500 companies that would benefit from the tax breaks being pushed by Fix the Debt. For instance, Microsoft's Bill Gates gave more than $1 million to NAF in 2011 through his foundation, as did Google executive chairman Eric Schmidt, who now chairs NAF's board.[10] According to a 2012 report from the Institute for Policy Studies (IPS), Microsoft would be one of the big winners if the United States switched to a territorial tax system of the type advocated by Fix the Debt, shaving some $19 billion off the taxes it pays to fund the United States government.[11]

Many NAF donors are also on Fix the Debt's CEO Council, including: Aetna, BlackRock, Google, Humana, UnitedHealth Group, United Parcel Service, Wal-Mart, and Merck.[10] NAF board member Steve Rattner is on the steering committee of Fix the Debt, as are CRFB board members Erskine Bowles, lobbyists Vic Fazio and Jim Nussle, and Alan Simpson.

Committee for a Responsible Budget Once Partnered With Big Tobacco

Since 1981, CRFB has kept up a steady drum beat of seminars, reports, "blue ribbon" commissions, and the like, all focusing on the nation's debt crisis and the need to reform "entitlements" such as Social Security and Medicare, which are better described as earned benefit programs that American workers pay into with each paycheck. Pete Peterson, Erskine Bowles, Alan Cranston, and Alice Rivlin all serve on its large board.[12]

In the 1990s, CRFB formed a "Cost Containment Coalition" that objected to the Clinton Health Care reform proposals and any new taxes to pay for health care for Americans. CRFB's opposition was portrayed as a tough, principled stand, but years later, documents were revealed that showed that the Tobacco Institute, a now defunct industry lobbying group, funded the coalition[13] while Philip Morris funded CRFB President Carol Cox Wait.[14] Internal Philip Morris memos found in the Tobacco Library describe how the firm worked with CRFB to set up the coalition to help the company achieve its "overriding objective" of avoiding tobacco excise taxes as part of any health care reform package, even though tobacco-related illness contribute to the national cost of health care.[15]

Cox Wait, who is reportedly married to Philip Morris vice president Bob Wait,[16] was doing double duty as a federal budget consultant to the tobacco giant. An internal Philip Morris document explains why this is helpful to them: "Because of her bipartisan Board, 'Committee for a Responsible Federal Budget,' and given her 'neutral' status, Carol is able to access many people who would be inaccessible to us given our issues."[14]

More recently, CRFB and its Fix the Debt project have come under fire for fronting for firms pushing for a territorial tax system, a tax break for profits earned offshore (see IPS' "The CEO Campaign to 'Fix' the Debt: A Trojan Horse for Massive Corporate Tax Breaks") and for fronting for defense industry firms anxious to avoid budget cuts (see Public Accountability Initiative's "Operation Fiscal Bluff").

The Moment of Truth Project

The Moment of Truth Project (Twitter handle @bowlessimpson) is listed as a project of CRFB on its website. It was funded by a $300,000 Peterson Foundation grant in 2011[3] after the National Commission on Fiscal Responsibility and Reform (better known as the "Simpson-Bowles Commission") failed to garner enough votes to pass a final deficit reduction package. It is named for the chairmen's report released by Simpson and Bowles in December 2010 called "The Moment of Truth: Report of the National Commission on Fiscal Responsibility and Reform." The Peterson funded project gave Erskine Bowles and Senator Alan Simpson staff support and a PR platform to continue their advocacy for cuts to the federal budget after the commission ended.[17]

The Concord Coalition, which was founded in 1992, lists Peter Peterson as its co-founder.[18] It specializes in taking the fiscal austerity message outside the beltway with costly tours and town hall meetings. On January 28, 2013, the Concord Coalition announced that it is partnering with Fix the Debt on a series of public forums. According to the Concord Coalition's website, "This joint project will focus its efforts on ten programs in six states: Colorado, New Hampshire, Iowa, Wisconsin, Florida and Tennessee."[19] All of the states the programs are featured in, with the exception of Tennessee, were swing states in the 2012 presidential election.[20] This tracks with what Fortune characterized as the "next stage" for Fix the Debt and its partner organizations: "Up to this point, Fix the Debt's ad campaigns have been largely Washington-focused, combined with a heavy dose of CEO-lobbying. The next phase, Romano says, is national outreach. The campaign increasingly resembles a presidential race, with grassroots-style organizing and offices in places like New Hampshire, Ohio, Florida and Michigan."[21]

The first Concord Coalition forum on January 29, 2013 featured Timothy Pagliara, founder of Enact the Plan, a group created explicitly to promote support for the Simpson-Bowles Plan.[22]

Similarly in 2010, the organization engaged in a "Fiscal Solutions Tour," which was launched on September 28, 2010 prior to the conclusion of the Simpson-Bowles Commission. Had the commission succeeded in advancing a bill to Congress, the tour could have been the deficit scolds' main vehicle for rallying grassroots support to a Simpson-Bowles austerity bill. Economist James K. Galbraith called the tour "the latest Peter G. Peterson Foundation effort to rouse the public against deficits and the national debt -- and in particular (though they manage to avoid saying so) to win support for measures that would impose drastic cuts on Social Security and Medicare."[23]

The tour was conducted with support from the Peter G. Peterson Foundation and included the following primary speakers: Robert Brixby of the Concord Coalition,[24] Douglas Holtz-Eakin of the CRFB,[25] William Novelli (the Republican former CEO of the AARP),[26] Isabel Sawhill of the Brookings Institute,[27] and former Peterson Foundation Director and founder of the Comeback America Initiative David M. Walker.[28] The tour visited Iowa three times, as well as California, Pennsylvania, New Hampshire, Texas and Georgia. 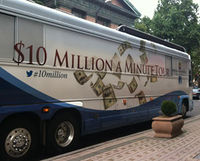 In the months leading up to the 2012 presidential election, Fix the Debt partner the Comeback America Initiative (CAI) launched the "$10 Million A Minute Bus Tour," featuring former Comptroller General of the United States and former head of the Peter G. Peterson foundation, David M. Walker. Although the Peterson Foundation bankrolls CAI to the tune of $3 million, Walker took umbrage when U.S. Senator Bernie Sanders accused him of carrying water for Pete Peterson and other millionaires and billionaires.[29][30] Walker claimed that the Peterson Foundation did not provide any direct funding associated with the tour,[31] and the sources of funding are not disclosed, although Peterson has funded other operations himself outside of the Peterson Foundation. The tour hit over 23 cities in 17 states, with 33 events in the 33 days leading up to the election[32]

Campaign for America's Future writer Richard Eskow dubbed the bus tour a "Magical Misery Tour": "Somehow the Peterson crowd thought that it would electrify the nation to see Walker, a former Comptroller General, ride around on a converted Greyhound (or whatever vehicle they've purchased) with other aging anti-government types."[29]

Eskow was wrong, however. The thrifty budget scold did not use a Greyhound. CAI chartered and "wrapped" a bus with their slogan (see image above), a much more pricey endeavor and one of the Center for Media and Democracy's (publisher of SourceWatch) top ten signs of an astroturf organization.

When launching the tour, Walker partnered with Ross Perot in a USA Today op-ed warning that the debt was rising by $10 million a minute, with "serious sustainability challenges that threaten our future position in the world" and even "the future domestic tranquility in our streets." The op-ed touted ideas like "no budget, no pay," "which would stipulate that if Congress fails to pass a budget and required spending bills by the end of a fiscal year, the members would not get paid until they fulfilled this responsibility."[33] In January 2013, the House passed a bill that postponed the "debt ceiling" debate and included "no budget, no pay" language. Multiple media outlets ridiculed the House for failing to read the Constitution, which does not allow Members of Congress to adjust their pay during session.[34]

The Committee for Economic Development (CED) has received $1,853,616 from the Peter G. Peterson Foundation since 2009.[5] In the lead up to the 2012 elections, the CED hosted four forums as a part of its Fiscal Health Initiative, the specific project the Peter G. Peterson Foundation funded through its 2012 grant.[5] These forums implored legislators to enact fiscal austerity measures, including cuts to Medicare and Medicaid.[35]

The so-called "premium support" model of Medicare "reform" advocated by CED,[36] involving vouchers for private insurance plans, would "end Medicare as we know it," according to economist Dean Baker: "Under the Republican plan there is absolutely no guarantee that beneficiaries would be able to purchase plans that cover the services that IPAB [Independent Payment Advisory Board] might exclude from Medicare coverage. . . . Furthermore, the Congressional Budget Office (CBO), based on extensive experience with private sector insurers who already operate in the Medicare system through Medicare Advantage, projects that private insurers will hugely increase the cost of getting Medicare-equivalent policies. This is both due to the fact that private insurers have much higher administrative expenses than the public Medicare system and also that they are less effective in containing costs."[37]

"The Can Kicks Back"

"The Can Kicks Back" video

The Can Kicks Back is not listed on the Peter G. Peterson Foundation website as a current project, but it appears to be a project of the Peterson-funded Fix the Debt campaign.

The Washington Post calls The Can Kicks Back a "group of young deficit hawks making it their mission to warn the Millennial Generation about the dangers of an out-of-control deficit."[38] The group is the champion of stunts and videos, like handing out bags of empty tin cans to reporters[39] and teaching Alan Simpson to dance Gangnam style (see video). It has Simpson and Bowles on its board and has the same goal as Fix the Debt (a "grand bargain" by July 4). It even shares office space with NAF/CRFB,[40] but Fix the Debt references it as an independent group, as can be seen from this Facebook post: 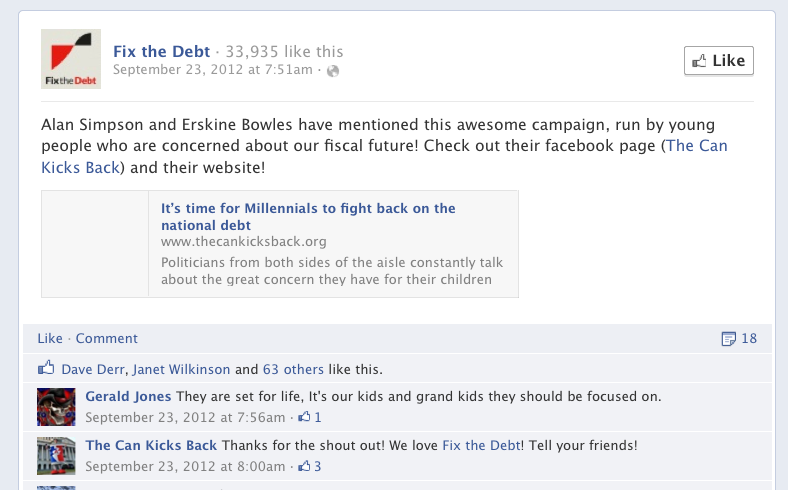 The group has been treated uncritically by the press, as puff pieces in the LA Times[41] and the Washington Post show.[38] These pieces fail to reveal the group's funders, although the Fix the Debt logo now appears on most Can Kicks Back films.