For more than 70 years, U.S. Social Security has guaranteed a level of economic security for retired workers. Despite Social Security’s popularity and effectiveness, it came under attack under President George W. Bush, who made privatization of Social Security a priority for his second term.[1] The attack on Social Security has re-emerged as deficit scolds see the financial crisis as an opportunity to weaken the program by proposing deep cuts in benefits and raising the retirement age.

Cutting Social Security, Medicare, and Medicaid -- which is advocated under the more benign-sounding phrase of "Entitlement Reform" -- is a core policy platform of the Campaign to "Fix the Debt."[2] The Campaign to Fix the Debt is the latest incarnation of a decades-long effort by former Nixon man turned Wall Street billionaire Pete Peterson to slash earned benefit programs such as Social Security and Medicare under the guise of fixing the nation's "debt problem." Fix the Debt co-founders Erskine Bowles and Alan Simpson included deep cuts to Social Security in their report after the National Commission on Fiscal Responsibility and Reform failed to agree on a plan. Fix the Debt financier Pete Peterson has invested in multiple efforts to suggest that Social Security is a fiscal calamity that could "threaten American values and traditions."[3]

Despite all the bluster, there is no crisis in Social Security. Social Security is financially sound and does not contribute a dime to the federal deficit. The Social Security trust funds had an accumulated surplus of $2.7 trillion in reserve at the end of 2011. That reserve is expected to grow to $3.2 trillion by 2021.[4]

Social Security is a self-financed federal program that provides modest monthly cash benefits to retired and disabled workers and their family members, as well as to surviving spouses and children of deceased workers. Social Security is paid for by payroll taxes paid by workers and their employers. Employers and employees each pay 6.2 percent of covered earnings up to an annual limit ($113,700 in 2013).[5] All earnings above the annual limit are not subject to payroll taxes. This means that a CEO or investment banker who makes $1 million a year only contributes to Social Security on the bases of the first $113,700 of their earnings; they pay no Social Security taxes on the remaining nearly $900,000 of their income.

People can begin to claim benefits as early as age 62. However, those workers incur a substantial penalty for retiring early.

Retirement benefit levels are based on a worker's career average earnings and the number of years of work. The maximum Social Security benefit in 2013 is $2,533 a month, or slightly more than $30,000 a year. However, the vast majority of people receive substantially less than the maximum. In 2013, the average Social Security benefit is $1,261, or about $15,000 a year.[7]

Despite the modest benefits, Social Security is one of the most effective anti-poverty programs in the U.S. Without Social Security, nearly half of those age 65 or older would have income below the poverty level.[8] 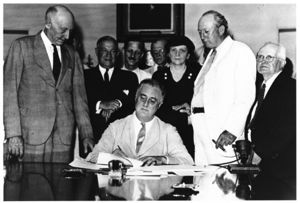 Social Security was created in 1935, at the height of the "Great Depression." At that time, there was no national program that provided any safety net to older workers. Following the stock market crash of 1929, the unemployment rate exceeded 25 percent; about 10,000 banks had failed; and total wages paid to workers had fallen by 40 percent from 1929 to 1932.

The economic problems were particularly acute for older Americans. Prior to the creation of Social Security in 1935, there was not much to support older Americans. There were a few state-based programs, but those were mostly small and ineffective. Only about 3 percent of the elderly received benefits under these state plans, and the average benefit was about 65 cents a day. At the same time, only about five percent of the elderly received any form of a retirement pension.[9]

Beyond those negligible forms of retirement security, there was little else, and the poverty rate for the elderly during the Great Depression was estimated to reach 50 percent.[10]

The original Social Security Act of 1935 provided benefits to individuals who were aged 65 or older and who had "earned" retirement benefits through work in jobs covered by the system. Benefits were to be financed by a payroll tax paid by employees and employers on wages up to a base amount ($3,000 per year at the time). Monthly benefits were to be based on cumulative wages in covered jobs. Social Security taxes were first collected in 1937. The first monthly benefit payment was made in 1940.

The creation of Social Security was a major advance. A "social insurance" program that provided workers with a safety net based on worker contributions was a significant shift away from providing supports as a welfare payment. The prior minimal efforts to provide social supports created hierarchies of "deserving" and "underserving" poor. The near universal nature of Social Security avoided those traps.

Social Security has additional benefits that many public and private retirement plans do not: spousal benefits, survivor benefits, and disability benefits. In fact, more than 30 percent of Social Security benefits go to workers who have disabilities that prevent them from working, families of retired or disabled workers, and survivors of deceased workers.[11] No other wage-replacement program offers the protections that workers receive from Social Security.

Social Security does not contribute one dime to the federal budget deficit. This is because Social Security has its own funding source (payroll taxes). It takes in more money than it pays out to beneficiaries. And it has an ample surplus to pay benefits well into the future.[12]

There is no Social Security "crisis." The Social Security Trust Fund -- the account that manages the income and expenses of the Social Security system -- had $2.7 trillion in reserves at the end of 2011. That surplus will continue to grow through 2021, when it is expected to reach $3.2 trillion.[13]

Modest changes in the program, such as increasing the cap on taxable earnings so that the rich pay their fair share of Social Security costs, would guarantee that full benefits would be paid as far into the future as one can project.

Raising the Retirement Age (Or, "Work Until You Die")

Fix the Debt co-founders Erskine Bowles and Alan Simpson proposed raising the retirement age in their failed National Commission on Fiscal Responsibility and Reform. Their proposal would have phased in an increase in the full retirement age to 69 and prevented workers from receiving reduced early retirement benefits until they reached 64.

This proposal follows the bogus rationale that increased life expectancies warrant an increase in the retirement age -- a premise that suggests that workers who retire before age 69 are living a high life on the gravy train while they are nimble enough to be working physically demanding jobs. However, continuing to work to age 67, let alone 68, 69, or even 70, is not a reasonable option for many workers. In 2008, half of Social Security beneficiaries began to collect benefits at the age of 62 -- the first age at which benefits could be collected -- despite the substantial penalty in benefit amounts compared to working to the full retirement age.[15]

Many workers are forced into retirement due to the physical demands of their jobs. Almost half of workers aged 58 and older are in jobs that are physically demanding or have difficult working conditions.[17]

Raising the age, both for full retirement benefits and the age for which people can retire early and claim lower benefits, would penalize these workers. For them, "early retirement" is not a lifestyle choice. Health reasons, working conditions, or loss of employment force them to stop working.

Alan Simpson made some highly controversial comments disparaging Social Security and its beneficiaries and advocates related to his failed proposal to gut Social Security while co-chairing the National Commission on Fiscal Responsibility and Reform.

In an email to Ashley Carson, Executive Director of the Older Women’s League, Simpson said about Social Security, And yes, I’ve made some plenty smart cracks about people on Social Security who milk it to the last degree. You know 'em too. It’s the same with any system in America. We’ve reached a point now where it’s like a milk cow with 310 million tits![21]

In 2012, Simpson referred to seniors advocating against the cuts to Social Security that Simpson and Bowles recommended as greedy geezers.[22]

However, before Alan Simpson hated Social Security and wanted to gut it, he was an apparent advocate for protecting it. In 1996, while a U.S. Senator, Simpson filed a non-binding sense of the Senate that said, among other things, "[S]ocial security is currently a self-financed program that is not contributing to the Federal budget deficit," and, "[S]ocial security beneficiaries throughout the nation deserve to be reassured that their benefits will not be subject to cuts.[23]