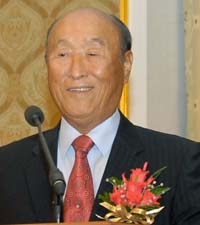 Rev. Sun Myung Moon is the head of the Unification Church and the founder of the Washington Times. His son is Hyun Jin Preston Moon.

Sun Myung Moon was born in 1920 in rural Korea. His official biography states that at the age of 16, Jesus appeared to Moon and asked him to continue the work he had started 2000 years earlier.[1] In 1945, Moon released a book of his organized teachings entitled The Divine Principle and in the ensuing years began to lay the ground work for his Unification Church which he officially founded in 1954. [2][3] In the early 1970s, Moon began a concerted effort to bring his teachings to America. [4] Since that time, the Unification Church has grown exponentially worldwide, and is now a financially powerful organization.

Ownership of the Washington Times

In 2002, Arnaud de Borchgrave, now Editor at Large for United Press International, wrote that Moon decided that after the collapse of the Washington Star there remained a need for a conservative paper to challenge the Washington Post. Moon, he said, "concluded that the lack of a robust second newspaper in Washington would jeopardize President Ronald Reagan's efforts to roll back the Soviet empire and roll up communism. Anti-anti-communism had become fashionable in the dominant liberal media culture, a trend Moon felt would jeopardize not only U.S. security, but the security of his own country where 37,000 U.S. soldiers stood guard against the possibility of another invasion of South Korea by a still aggressive North Korea."

"Moon disclosed in May 1992 that he had invested 'close to $1 billion' since the paper's founding in 1982. He said he wanted to make the newspaper 'an instrument to save America and the world'", Allan Freedman reported in the Columbia Journalism Review.

However, according to Freedman "he does not sit on the board of the paper's parent company, News World Communications. Each member of the board, however, is a member of Moon's Unification Church," he wrote.

Writing in October 2000 in Salon, Frederick Clarkson noted that Moon often cultivated close relationships with key conservative figures and was a generous sponsor." The former President Bush (sometimes accompanied by former first lady Barbara Bush) spoke at a series of Moon-sponsored events in Japan, Argentina and the U.S. after he left the White House. Estimates of how much the couple received for these appearances run between $1 million and $10 million," he wrote. Though the net appears to have been purged of photos of the Bushes with Moon, here's one of the Bushes with Mrs. Moon and Moon's long time right hand man Bo Hi Pak.

Nor were the Bush's the only beneficiaries. "Former Reagan Secretary of Housing and Urban Development Jack Kemp earned $52,000 from Moon-affiliated groups in the year before becoming Bob Dole's GOP running mate in 1996," he wrote.

Ceremony in a Senate office building 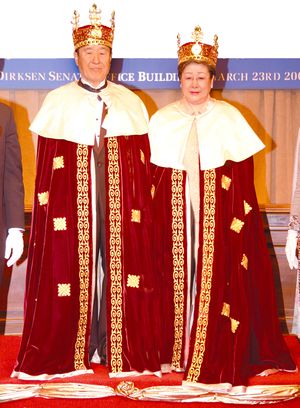 Moon and his wife after their 'coronation'

In March 2004, Moon convened an extarordinary ceremony in the Dirksen Senate Office Building, ostensibly as an awards ceremony for 'peace ambassadors', in front of several dozens members of Congress and over two hundred other guests. In a speech after the awards were presented Moon pronounced "I am God's ambassador, sent to earth with His full authority. I am sent to accomplish His command to save the world's six billion people, restoring them to Heaven with the original goodness in which they were created."

"The five great saints and many other leaders in the spirit world, including even Communist leaders such as Marx and Lenin, who committed all manner of barbarity and murders on earth, and dictators such as Hitler and Stalin, have found strength in my teachings, mended their ways and been reborn as new persons. Emperors, kings and presidents who enjoyed opulence and power on earth, and even journalists who had worldwide fame, have now placed themselves at the forefront of the column of the true love revolution," he said. [9]

"They have declared to all Heaven and Earth that Reverend Sun Myung Moon is none other than humanity's Savior, Messiah, Returning Lord and True Parent. This resolution has been announced on every corner of the globe," he said. [10]

Moon's extraordinary announcement that he was the humanity's saviour went unreported, other than in the Washington Times. In June 2004, Salon writer, John Gorenfield, reported the event and that some members of Congress claimed that they did not know the "Moonie nature of the group or that they did not know the event would evolve into a messianic coronation". Its invitation, however, listed Moon's Interreligious and International Federation for World Peace as event's primary sponsor.

While most of the attending members of Congress denied previous knowledge of the specifics of the ceremony, Rep. Danny Davis (D-Ill.) both spoke and donned white gloves to assist in placing a crown on Moon's head. [11]

Rep. Roscoe Bartlett was honored himself, receiving an Ambassador of Peace Medal from the Washington Times Foundation. [12]

Reps. Curt Weldon and Elijah Cummings also gave speeches. Weldon's office initially denied even his attendance, but was forced to change its stance when a photo surfaced showing Weldon onstage standing beside a picture of himself pinning a small lapel pin onto Libyan strongman Muammar Qadhafi. [13]

The following members of Congress were confirmed to have attended the ceremony:

The following members of Congress were not at the event, but were listed as Congressional Co-Chairs or members of the Host Committee on the event invitation (though many claim no knowledge of their positions):

While he did not personally attend the ceremony, on April 16, 2004, Rep. Charles Rangel (D-N.Y) signed a statement written on official congressional stationary that recognized Moon and his wife as "True Parents" and "King of Peace." [14]

Speeches and Statements by Rev. Moon

About the Washington Times

About Rev. Moon and his Unification Church