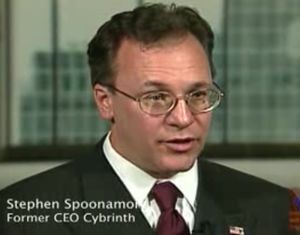 Because of his interest in data security and in democracy, Spoonamore has followed closely security issues involved with electronic voting in United States. His understanding of the vulnerabilities of American elections to fraudulent manipulation is based upon conversations with professionals in election administration working within state governmental structures, as well as information technology specialists working in private industry on a contract basis for state governments. His concern and knowledge about these issues led him to agree to serve as an expert resource and witness for plaintiffs' counsel and the King Lincoln case in federal court in Ohio.

In a September 2008 affidavit filed in federal court in the above-mentioned case, Spoonamore described a type of computer attack called a "Man in the Middle" or MIM attack that could have easily been executed to manipulate the state of Ohio election returns in 2004. He described the vulnerabilities of Diebold touchscreen voting machines:

In my opinion, there is NO POSSIBLE WAY to make a secure touch screen voting system.

None. Secure systems are predicated on establishing securely the identity of every user of the system. Voting is predicated on being anonymous. It is impossible to have a system that does

Mike Connell was a key Republican information technology contractor who set up the computers for counting the votes in Ohio in the 2004 election. He was killed December 19, 2008 in a single-engine plane crash He had recently been subpoenaed to testify in the King Lincoln Bronzeville Neighborhood Association v. Blackwell case.[1][2]

In his court affidavit, Spoonamore stated,

While he has not admitted to wrongdoing, and in my opinion he is not involved in

voting theft, Mike [Connell] clearly agrees that the electronic voting systems in the US are not secure. He further made a statement that he is afraid that some of the more ruthless partisans of the GOP, may have exploited systems he in part worked on for this purpose. Mr. Connell builds front end applications, user interfaces and web sites. Knowing his team and their skills I find it unlikely they would be the vote thieves directly. I believe however he knows who is doing that work, and has likely turned a blind eye to this activity. Mr. Connell is a devout Catholic. He has admitted to me that in his zeal to 'save the unborn' he may have helped others who have compromised