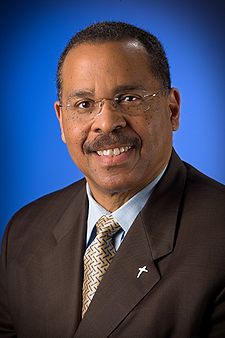 J. Kenneth Blackwell is the former Ohio Secretary of State and former Ohio gubernatorial candidate. Blackwell and former Republican House Majority Leader Tom DeLay co-founded the Coalition for a Conservative Majority (CCM) in November 2007 as a "new grass-roots organization [to] help conservatives better convey their message to voters and take back control of Congress."[1]

In mid-March 2007, Blackwell "hired on as a Senior Fellow for Family Empowerment at Washington's premiere right-wing religious lobbying outfit," the Family Research Council.[2]

In the 2006 congressional election, Blackwell ran against Rep. Ted Strickland, 6th Congressional District Democratic incumbent who was giving up his seat to run for Ohio governor. Strickland defeated Blackwell by 23 percentage points.[3]

Despite allegations of widespread vote rigging in his state and an ongoing lawsuit over the same, in December 2008, Blackwell wrote to the Republican National Committee (RNC) "after prayerful consideration," asking to be considered for the chairmanship of the RNC.[4]

Ohio voters sued Blackwell on August 31, 2006 in a case called King Lincoln Bronzeville Neighborhood Association v. Blackwell in which individual voters and three voters' rights groups alleged that, in his capacity as Secretary of State, Blackwell "allocated [2004] election resources in a racially discriminatory manner and instituted racially discriminatory procedures for provisional voting, purging voters from the statewide voter registration database, and maintaining the chain of custody of ballots. The complaint alleged that these actions led to the dilution and/or cancellation of plaintiffs' vote due to ballot cancellation and tampering, long poll lines, mechanical difficulties with voting machines, and unclear precinct boundaries." The complaint claims that plaintiffs reasonably feared these problems would recur in the November, 2006, election, and asked the court to appoint a special master to perform Blackwell's election administration duties in that election.[5]

A Canton, New York resident named Richard Hayes Phillips who worked with the Ohio Honest Elections Campaign said he examined thousands of punch-card ballots cast in Ohio's heavily Democratic inner-city precincts that were tossed out because of over- or under-voting in the 2004 presidential race. Phillips said he found that on more than 1,900 ballots in six urban counties, there was a vote for President Bush or Senator John Kerry, and a second vote for one of the two independent candidates. In cases such as these, no presidential vote is counted. Philips noted that the problem was unusually prevalent, and appeared to be concentrated in every fifth precinct, and concluded the ballots in the urban areas must have been pre-punched, disproportionately affecting Kerry votes. [6]

Blackwell is the focus of many allegations regarding the U.S. presidential election, 2004, vote count controversy while serving as Ohio Secretary of State.

Bob Fitrakis and Harvey Wasserman reported[7] prior to the election the following abuses of his power in the weeks leading up to the vote, consisting mostly of a series of rulings that favored President Bush's side:

On November 13, 2004, blackboxvoting.org alleged that Blackwell was responsible for "failure to properly account for provisional ballots, and refusing to allow citizens to see the pollbooks." This as part of the Help America Audit - an electoral fraud audit based on forensic audit techniques - that Bev Harris has initiated in parallel with the U.S. presidential election, 2004, Ohio vote recount by David Cobb of the Green Party of the United States and Michael Badnarik of the Libertarian Party of the United States.

"Mr. Blackwell is a member of the national advisory boards of Youth for Christ and was formerly a domestic policy analyst at the Heritage Foundation in Washington, D.C. Mr. Blackwell has held the nation's highest security clearance. He is a contributing commentator for Salem Communications, delivering commentaries on Salem's more than 90 [Christian] radio stations nationwide."

Rappaport concluded his article "Enter, Mr. Blackwell: Was He Bush's Trump-Card in Ohio" with:

"I'm not making the point that Blackwell is bad because he's a Republican. I'm illustrating that this is a very ambitious man who's positioned as a Republican FOR BUSH and for what Bush believes, right down to his shoes. A man who campaigned resolutely for Bush and THEN oversaw the state election which handed Bush a second term. A man who is a player in the Republican party, who knows the score, who can give favors and then ask for favors back, as he pushes his own career upward.

"Is this a conflict of interest that could have led Blackwell to improperly set the conditions for a Bush triumph? Is the Pope Catholic?"