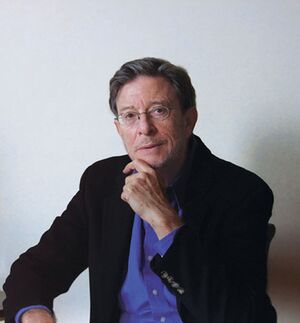 Stephen Frand Cohen is a contributing editor at The Nation and married to its former editor-in-chief, Katrina vanden Heuvel.[1] Cohen is also professor emeritus of Russian Studies and History at NYU and was professor emeritus of Politics at Princeton University until 1998.[2] He is a frequent visitor of the John Batchelor Show, a breaking-news program available online, where he contributes to a segment called "Inside the New Cold War".[3] Cohen's Jordan Russia Center at NYU page calls him "among the most distinguished scholars of Russian history in the United States" and "an expert on Russian-American relations", noting how he "has contributed both domestically and abroad in shedding light on the two countries’ political and historical relationship."[4] He has written several books, most recently War with Russia: From Putin and Ukraine To Trump and Russiagate, which is scheduled for release in January 2020.[5]

Cohen's books and commentary focus primarily on Russian politics and history since 1917, U.S.-Soviet/Russian relations, and American media coverage of the Soviet Union and Russia.[6]

Cohen has claimed that Trump is the "improbable messenger" of the "pro-détente argument" towards Russia and attacking Trump as 'Putin's puppet' is an example of "neo-McCarthyism".[7]

Cohen has written extensively about Russiagate, calling it a "myth" and worrying about its implications for armed conflict between the U.S. and Russia.[8]

Throughout 2014[9][10] and 2015,[11] Cohen repeatedly characterized U.S. intervention in the Russia-Ukraine conflict "A New Cold War", calling it "the most dangerous geopolitical situation since the Cuban missile crisis"[12] and worrying that the Ukrainian conflict had lead to "a real chance of war with Russia" for the U.S. and NATO.[13]

In a 2015 pre-debate interview on the question of isolation vs. engagement with Russia and Putin, Cohen worried that a "showdown" between Western nations and Russia would "flirt with the danger of nuclear war." He also claimed Putin had been "preposterously demonized in the West", calling his presidency "a traditional, Russian regime". Cohen also argued "the entire United States Congress ...seems to want a showdown with Putin", pointing out how, on the four votes on "shipping the weapons [to Ukraine]... only 48 members of the House voted against it, no members of the Senate."[14]