The State Financial Officers Foundation (SFOF) is a 501(c)3 nonprofit organization that describes itself as “the premier free-market organization bringing financial officers together with the nation’s top private sector companies and organizations.”[1] Although SFOF is registered as a nonpartisan nonprofit and claims “it is not involved in issue advocacy on behalf of elected officials,” the “team” is composed of all Republican financial officers, most of whom serve in elected positions.[2][3]

Over 150 people gathered for the three-day Fall National SFOF meeting in Washington D.C. in November 2022, an attendee list obtained by the Center for Media and Democracy (CMD) showed. The weekend included much discussion of how to further the anti-ESG (Environmental, Social, and Governance) movement, with panels "The Continued Battle Against ESG Investing" and the "Legal Argument for Fiduciary Responsibility," being just two of the panels that touched on ESG. The meeting is just one example of SFOF's role in "spreading misinformation" about climate change to "blacklist financial firms that divest from fossil fuels", CMD reported.[4] SFOF is also one of the organizations pushing ALEC's model Eliminate Political Boycotts Act, which seeks to punish companies for taking "social, political, or ideological interests" into account when divesting from fossil fuels and other environmental resources.[5]

A full attendee list of the meeting obtained by CMD is published here.

Details on prices and benefits for all four of SFOF sponsorship levels were revealed by Responsible Investor in August 2022.[6]

The Heritage Foundation awarded one of its inaugural Innovation Prizes to SFOF for their anti-ESG work. Heritage president Kevin Roberts describes the prize, saying, "The conservative movement must go on offense like never before against those trying to bring down the nation from within. [The Innovation Prize] is about serving the movement and uniting conservatives--particularly outside the Beltway-- to defeat the destructive ideology and designs of the radical left." In response to the award, SFOF CEO Derek Kreifels said, "It is such an honor to be recognized with a Heritage Foundation Innovation Prize as we work to educate hte public with SFOF's 'Our Money Our Values' campaign."[8]

In an April 5 letter to President Biden, the State Financial Officers Foundation asked for an increase in American production and development of fossil fuels.[9]

"The State Financial Officers Foundation and state leaders support policies to expand energy production and development, encourage conserving, and urge this Administration to change its policies toward American reliable energy sources in order to protect the U.S. economy, and provide energy security for American families," the letter reads.[9]

The letter ignores the damage to the economy caused by the climate emergency. "Floods, drought, wildfires and hurricanes made worse by climate change could cost the U.S. federal budget about $2 trillion each year — a 7.1% loss in annual revenue — by the end of the century," the White House said in an assessment in early April 2022.[10]

A January 2022 report by Deloitte found that "Inaction on climate change could cost the US economy $14.5 trillion by 2070," but "the U.S. economy could gain $3 trillion over the next 50 years if it accelerates towards a path of low-emissions growth."[11]

Republican treasurers, auditors, and staff from 16 states huddled together with corporate lobbyists and an array of right-wing groups for the State Financial Officers Foundation’s Annual Meeting in New Orleans in February 2022 to discuss strategies to combat “woke” policies, fake news, and China, the Center for Media and Democracy (CMD) reported.[12]

SFOF’s top priorities for 2022 outlined in the agenda prioritize fighting “woke” capitalism and “defend[ing] the market economy” against the growing Environmental, Social and Governance (ESG) movement among corporations to consider community interests and not just shareholders.[12]

The keynote speaker for SFOF's annual meeting was Vivek Ramaswamy, a biotech entrepreneur and author of Woke, Inc: Inside Corporate America’s Social Justice Scam. Ramaswamy has been on a right-wing speaking tour attacking responsible investing as a marketing ploy since the book was published in June 2021.[12]

In a Jan. 31 letter, SFOF urged President Biden to withdraw his nomination of Sarah Bloom Raskin for Vice-Chair for Supervision at the Federal Reserve for what they called her “radical banking and economic views” that would “disrupt the private banking sector, reliable energy supplies, and the U.S. economy.”[14]

Raskin has argued that regulators should consider climate change risks as a factor in their decisions.

Leadership of the American Legislative Exchange Council (ALEC) occupy key posts in SFOF and were in attendance at the 2022 Annual meeting, a final confirmed attendee list obtained by the Center for Media and Democracy (CMD) revealed.[17]

ALEC CEO Lisa Nelson is on the group’s board of directors. ALEC Chief Economist and Executive Vice President of Policy Jonathan Williams is a senior policy advisor and sits on SFOF’s National Advisory Committee.

As of May 2022, ALEC is also listed as an "educational resource" at the bottom of the SFOF homepage.[18] 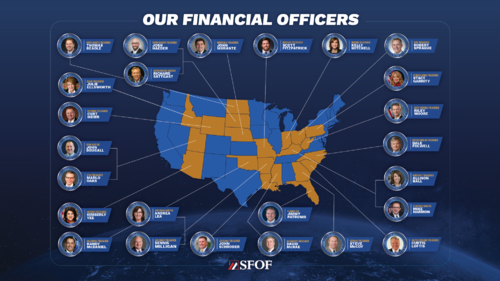 State Financial Officers Foundation is not required to disclose its funders but major foundation supporters can be found through IRS filings. Here are some known contributors: