Rachelle Lefevre is a Canadian actress who was born in Montreal on February 1, 1979.[1] She is perhaps best known for her role of Victoria in the 2008 film Twilight.[2] Lefevre is a member of the Environmental Media Association's Young Hollywood Board.[3] 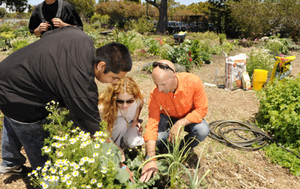 Rachelle Lefevre at Venice Senior High School on May 26, 2010 at an EMA event, with a bag of Kellogg's sewage sludge based product, Amend, behind her

Lefevre's involvement with the Environmental Media Association placed her in the midst of a scandal. In 2010, she attended EMA's event "Gettin' Your Garden On" at Venice Senior High School's organic garden, sponsored by Yes to Carrots and Kellogg Garden Products.[4] While Kellogg Garden Products sells some organic soil amendments, the majority of its business is selling sewage sludge-based composts, which are illegal to use in organic farms and gardens. In the picture at left, you can see a bag of Kellogg's Amend behind Lefevre. For more on this controversy, see the article on the Environmental Media Association.