Toxic Sludge Is Good for You!

Welcome to our clearinghouse for information about hazardous sewage sludge. This resource is part of CMD's Food Rights Network.

Sewage sludge is the growing and continuous mountain of hazardous waste produced daily by wastewater treatment plants. The sewage sludge industry has created a PR euphemism it uses in place of the words "sewage sludge": "biosolids."

In March 2013, a study led by the University of North Carolina's Dr. Steve Wing involving neighbors of land where sewage sludge had been dumped -- "living in rural and semi­rural areas within approximately one mile of sewage sludge land application sites in North Carolina, South Carolina and Virginia" -- found that "over half of respondents attributed physical symptoms to application events." More specifically, "Over half (18/34) of the interview respondents associated acute physical symptoms that lasted a short period of time with sludge application events near their home (Table 1). The most commonly reported symptoms were eye, nose, and throat irritations and gastrointestinal symptoms (nausea, vomiting, diarrhea). Other symptoms reported by more than one respondent include cough, difficulty breathing, sinus congestion or drainage, and skin infections or sores."

The full epidemiological study can be found here. 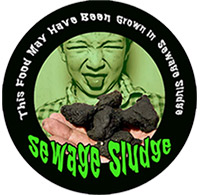 The Center for Media and Democracy (CMD) broke the story that the $12.9 billion-a-year natural and organic foods retailer Whole Foods Market had a policy of "don't ask, don't tell" when it comes to "conventional" -- or non-organic -- produce being grown in fields spread with sewage sludge, euphemistically called "biosolids." Certified organic produce cannot be fertilized with sewage sludge, which is the industrial and hospital waste and human excrement flushed down the drains and later -- in some cases -- spread on some crops.

Since this story broke, nearly 8,000 activists and PRWatch readers have sent emails to Whole Foods executives asking the company to require its suppliers to disclose this information and to label produce grown in sewage sludge so that customers can make informed decisions.

Mario Ciasulli, a semi-retired engineer and home cook living in North Carolina whom CMD profiled in December 2012, blew the whistle on Whole Foods' don't-ask, don't-tell policy. As soon as he found out that shopping at Whole Foods was no protection against this potential contamination unless he could afford to buy only certified organic produce, he worked extensively to engage Whole Foods on this issue. He has insisted that management address his concerns about potential contamination of non-organic produce, price barriers to organic produce for those who are concerned, and the difficulty of finding out what non-organic produce may have been grown in soil fertilized with sewage sludge without labeling and accountability.

In late 2013, Whole Foods announced a new set of standards for the fresh produce and flowers it sells. Sewage sludge was not mentioned in the announcement, but Ciasulli received word from the company that "[p]rohibiting the use of biosolids will be part of our core requirements. All of our suppliers will be compliant with the core requirements by the time we roll out the program." A follow-up email to Ciasulli indicated, "This initial release was meant to be high-level. There are far too many nuances to include on a press release."

This month, Whole Foods Market spokesperson Kate Lowery confirmed to CMD that the new standards will eventually prohibit the use of "biosolids." . . .

You can thank Whole Foods for listening to Mario and other concerned customers, ask Whole Foods to make this announcement public, and tell the company that you'll be watching to see that these changes are made HERE.

Why is Toxic Sewage Sludge Dumped on Farm and Gardens?

"The policy of disposing of sludge by spreading it on agricultural land - a policy given the benign term 'land application' - has its inception in the Ocean Dumping ban of 1987. Before 1992, when the law went into effect, the practice had been, after extracting the sludge from the wastewater, to load it on barges and dump it 12, and later 106 miles off shore into the ocean. But many people who cared about life in the ocean knew that, wherever it was dumped, the sludge was causing vast dead moon-scapes on the ocean floor. New EPA regulations for 'land application' were promulgated in 1993. With the aid of heating and pelletizing and some slippery name morphs along the way, EPA claimed sludge could be transmogrified into 'compost' ... . But the land “application” of sewage sludge ... will pollute the whole chain of life for which soil is the base." [1] In 2002, the National Research Council found that the "U.S. Environmental Protection Agency's standards that govern using treated sewage sludge on soil are based on outdated science."[2] This was again confirmed in 2011 when scientists found that noroviruses survive treatment that kills pathogens such as Salmonella.[3]

In March 2013, a study involving neighbors of land where sewage sludge had been dumped -- "living in rural and semi­rural areas within approximately one mile of sewage sludge land application sites in North Carolina, South Carolina and Virginia" -- found that "over half of respondents attributed physical symptoms to application events." More specifically, "Over half (18/34) of the interview respondents associated acute physical symptoms that lasted a short period of time with sludge application events near their home (Table 1). The most commonly reported symptoms were eye, nose, and throat irritations and gastrointestinal symptoms (nausea, vomiting, diarrhea). Other symptoms reported by more than one respondent include cough, difficulty breathing, sinus congestion or drainage, and skin infections or sores."[4]

Chez Sludge: How The Sewage Sludge Industry Bedded Alice Waters. As reported by author John Stauber, "The celebrity chef Alice Waters is probably the world's most famous advocate of growing and eating local, Organic food. In February 2010 her Chez Panisse Foundation chose as its new Executive Director the wealthy "green socialite" and liberal political activist Francesca Vietor. Vietor's hiring created a serious conflict of interest that has married Waters and her Foundation to the San Francisco Public Utilities Commission (SFPUC) and its scam of disposing of toxic sewage sludge waste as free "organic Biosolids compost" for gardens." (Later in 2010, the Chez Panisse Foundation quietly changed Executive Directors; Vietor has since taken the lead of the SFPUC.)

BACKGROUND: San Francisco Bay celebrity chef Alice Waters would probably never dump sewage sludge onto her own garden, nor serve food grown in biosolids sludge in her world famous natural foods restaurant Chez Panisse. The stated mission of her Chez Panisse Foundation is to create "edible schoolyards" where kids grow, prepare, and eat food from their own organic gardens. But when Francesca Vietor was hired in February 2010 as the new executive director of the Chez Panisse Foundation she was also the Vice-President of the San Francisco Public Utilities Commission. The (SFPUC) was running a scam of disposing of sewage sludge waste as free "organic Biosolids compost" for school and home gardens. Thanks to an "open records" investigation by the Food Rights Network, the public and the press have easy online access to scores of internal SFPUC files, documenting the strange tale of Chez Sludge: How the Sewage Sludge Industry Bedded Alice Waters.

The SFPUC had been deceptively bagging toxic sewage sludge as 'organic compost' and giving it away to unsuspecting gardeners, people to whom the word 'organic' connotes the highest level of pure, toxin-free food production.

On March 4, 2010, the Organic Consumers Association and dozens of San Francisco community groups protested at the mayor's office causing the city to put its sludge "compost" giveaway on the shelf, where it sits today -- a major victory for OCA and the Food Rights Network.

Documentary Filmmaker Deborah Koons Garcia Condemns BioCycle's Attack on Organics Advocates and BioCycle's Push to Grow Food in Sewage Sludge
At the national "BioCycle" conference on April 12, 2011 in San Diego, Deborah Koons Garcia bravely spoke out against the sewage sludge industry's efforts to pass off sewage sludge as great compost for gardens and farms. Koons, who directed the acclaimed film "The Future of Food" and whose newest film is "Symphony of Soil," had been asked to be give a keynote address by BioCycle due to her study of the amazing work of soil in our food and ecosystem.

When Garcia discovered that BioCycle promotes growing food in sewage sludge -- which is the industrial and human waste flushed down the drains and which contains hazardous substances like flame retardants, metals, endocrine disruptors, and pharmaceuticals -- she gave a keynote address to the conference opposing this practice and expressing concerns about the effect of this contamination on soils and land. She also condemned BioCycle's effort to smear organics advocates.

For more, see the SourceWatch articles on BioCycle, Sally Brown and Nora Goldstein and the Center for Media and Democracy news release on PRWatch here.

For more information on these and other products, visit our Toxic Sludge Products article.

Sludge in the News

Videos and Testing of "Organic Compost"

Watch the two videos below--from outstanding investigative reporting by the local CBS affiliate--which document the startling story of how San Francisco is violating its own precautionary principle law by dumping hazardous sludge on city gardens (and elsewhere):

Sewage sludge is contaminated with toxins and it is hazardous. The thousands of viruses, bacteria, heavy metals, persistent chemicals, human and animal drugs, carcinogens, endocrine disruptors and everything else that goes down the drain and into sewage plants ends up in the mountain of sewage sludge that the industry renames Biosolids and us increasingly trying to pawn off as "organic" fertilizer and compost. Today half of all sewage sludge is dumped on agricultural land, contaminating it with whatever it might contain. A growing body of scientific surveys and studies document the hazards of sludge. Here are some of them:

Go to our Scientific Studies of Sewage Sludge article to find links to dozens of peer reviewed scientific studies in their entirety that examine and confirm the many hazards of sewage sludge.

John Stauber, adviser to the Food Rights Network and co-author of the 1995 book "Toxic Sludge Is Good for You!," talks about the EPA PR campaign spinning toxic sludge into "beneficial biosolids."

Sewage sludge is the growing and continuous mountain of hazardous waste produced daily by wastewater treatment plants. The sewage sludge industry has created an Orwellian PR euphemism it uses in place of the words "sewage sludge"-- biosolids. The term Biosolids was chosen in a PR contest by the lobby association for U.S. sewage treatment plants, the Water Environment Federation (WEF).

The WEF, with the support of the Environmental Protection Agency, has since the 1990s been promoting spreading this hazardous waste on farms and gardens, after it proved too hazardous to landfill, incinerate or dump into the oceans. The sewage sludge lobby also includes major corporations such as Synagro, front groups such as the US Composting Council, publications including BioCycle magazine, and even the Rodale Institute.

The Food Rights Network (FRN) is a project of the Center for Media and Democracy. FRN opposes dumping toxic sewage sludge on farms and gardens and advocates that no food should be grown in toxic sludge. You can contact the FRN by email to FoodRightsNetwork AT gmail.com. You can also sign up to receive helpful news.

Here are some very helpful articles about the toxic sludge fight across the country: