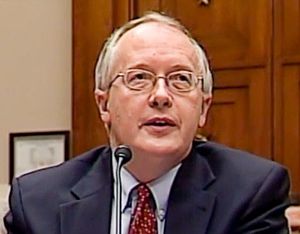 Myron Ebell, Director of CEI's Center for Energy and Environment

Myron Ebell is a climate change denier who was named as a member of President-elect Donald Trump"s transition team for the Environmental Protection Agency in November 2016.[1]

Myron directs the Global Warming and International Environmental Policy project at the Competitive Enterprise Institute (CEI) and the Cooler Heads Coalition, which was formed on May 6, 1997, "to dispel the myths of global warming by exposing flawed economic, scientific and risk analysis." CEI has received millions from fossil fuel companies to fund its work. Ebell formerly worked at the Frontiers of Freedom, on issues including "property rights, the Endangered Species Act, federal-lands policies, and global warming," and as a legislative assistant to Representative John Shadegg. He's also worked for the American Land Rights Association and National Taxpayers Union. [2] Both CEI and Frontiers of Freedom have received funding from ExxonMobil. [3] [4]

"Though he likes to bash scientists for working outside their degreed fields, Ebell, it turns out, isn't a scientist at all," a Vanity Fair article on Ebell stated. "He majored in philosophy at the University of California in San Diego, then studied political theory at the London School of Economics and history at Cambridge." Ebell retorted, "Every interview I do, when I'm asked about scientific issues, I say I'm not a climate scientist. I'm just giving you the informed layman's perspective." [5]

Ebell Educates State Attorney Generals About Climate Denial: In 2016, the Center for Media and Democracy, publisher of Sourcewatch, obtained audio from an private, undisclosed meeting[6] with the Republican Attorneys General Association (RAGA) where Ebell spewed climate denial to Republican AG's and urged them to continue pushing back against the climate fraud investigations. "Well the first thing they try to do is try to change reality. They try to change the facts. So they reinterpret the data so the United States climate temperature data, as reinterpreted by the federal government, they make the 1930’s and 40’s much cooler and that makes it look like there’s been a significant warming but in fact there has not," Ebell told the group of Republican AG's and lobbyists according to a transcript of the audio[7] published by CMD. "So I want to thank Attorney General Strange for writing and getting the signers on that letter, I’m not going to go through everyone who signed it but we are very grateful and I think it had a big impact and I will talk about that later on where we go from here."

Ebell's group CEI has been named in ExxonMobil investigation for deceiving the public and misleading its shareholders about the risks of climate change: After the Virgin Islands Attorney General Claude Walker issued CEI with a subpoena in April 2016 as part of the ExxonMobil investigation, CEI ran a full page ad[8] signed by several right-wing think tanks in the New York Times complaining that the groups were being attacked in state investigations into Exxon's campaign of climate denial. And since then, CEI has spoken out[7] at numerous conferences and in opinion editorials[9] pushing back at the investigations. CEI told Townhall that they were determined that Walker “faces sanctions” for the subpoena. “This was an abuse of process, plain and simple, and we’re determined to see that Walker faces sanctions for an action whose illegality he refuses to recognize,” CEI stated.[10]

Myron Ebell is a speaker at the America First Energy Conference to be held on November 9th, 2017. [1]

Ebell is a speaker at the International Conference on Climate Change (2009) organized by the Heartland Institute think tank. [14]

In September 2003, Greenpeace obtained evidence in the form of a [http://www.greenpeace.org/international/news/investigation-of-exxon-front-g memo] to Philip A. Cooney dated March 2002, outlining their strategy for dealing with the problems caused by scientifically-based "Climate Action Report 2002", which the US government had submitted to the UN. The crucial paragraph of this memo reads:

"As I said, we made the decision this morning to do as much as we could to deflect criticism by blaming the EPA for freelancing. It seems to me that the folks at the EPA are the obvious fall guys, and we would only hope that the fall guy (or gal) should be as high up as possible. I have done several interviews and have stressed that the president needs to get everyone rowing in the same direction. Perhaps tomorrow we will call for (Christine Todd Whitman) to be fired. I know that that doesn't sound like much help, but it seems to me that our only leverage to push you in the right direction is to drive a wedge between the President and those in the Administration who think they are serving the president's best interests by publishing this rubbish."

According to his biographical note on the the CEI website, "Prior to coming to CEI, Mr. Ebell was policy director at Frontiers of Freedom, a public policy advocacy organization founded by former Senator Malcolm Wallop. While at Frontiers of Freedom, he worked on a range of environmental and constitutional issues, including property rights, the Endangered Species Act, federal lands policies, and global warming." [2]

Frontiers of Freedom, spreads disinformation on climate change, and received funding from the fossil fuel industry, including ExxonMobil.[15]

"He previously served as senior legislative assistant to Rep. John Shadegg, and before that as Washington representative of the American Land Rights Association. .... Mr. Ebell holds a BA from Colorado College and an MSc from the London School of Economics. He did graduate work at the University of California at San Diego and at Peterhouse, Cambridge University," his biographical note states. [3]

"[A]s previous studies have concluded, the Antarctic and Greenland ice sheets are probably thickening rather than melting." [5]

"The US consumes about 25% of the energy in the world, and we produce between 25 and 30% of the wealth created in the world, so, in fact, the answer for the world is not to assume that by cutting back on American production and productivity, that you're going to get richer, the answer is the emulate the institutions and the policies that the United States has persued to become as wealthy and as productive as we are." [6]