A career bureaucrat (Bengali: মোহাম্মদ শামসুল আলম) from Bangladesh who underscore the unprecedented career-track world record in performing private secretarial job with Bangladesh Prime Minister for consecutive 15 years. He is a column writer and a researcher at the same time, work on public administration and governance issues in Bangladesh. 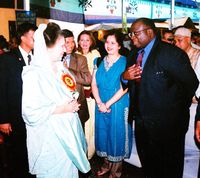 A graduate of Dhaka University Alam received his Master of Arts (postgraduate) in Philosophy and Masters of Business Administration from Daffodil International University.

The second oldest of six children of Dr. Md. Yousuf Ali, a physician and mother Begum Azufa Khatun, recipient of Ratnagarva Ma Award, Alam was born to a Muslim family in the village of Dasherjangal in Gosairhat Upazila under Shariatpur District of Bangladesh. His early childhood was spent in the village of Dasherjangal and started elementary schooling in Dasherjangal Government Primary School of Gosairhat and completed S.S.C. in 1st division from Idilpur Pilot High School. Then moved to the city of Chandpur and passed the H.S.C. in 1st division from Chandpur Government College. Later studied at famous Jagannath Government College, and finally enrolled in the department of Philosophy at Dhaka University and then Daffodil International University. Received Masters of Arts in Philosophy from Dhaka University and Masters of Business Administration from Daffodil International University, also a MCP.

Alam married to Major Khadiza Anam (now retired), was protocol officer to Bangladesh Prime Minister during 2002-06. They are blessed with two children Subah (13) and Shaffin (9).

Towards the end of 90s, Alam joined the BCS (Administration) Cadre as a fast-track career civil servant after succeeded in securing merit position in Bangladesh Civil Service Gazetted officers’ list through an open competitive examination held in 1988. He worked in the Prime Minister’s Office and was in charge of protocol affairs of Prime Minister and later private secretarial job with Prime Minister Begum Khaleda Zia from 1992 to 2006. For a short time he also worked for the Economic Relation Division, Ministry of Finance and Bangladesh Institute of Administration & Management (BIAM) in the capacity of Deputy Project Director. Before joining to civil service Shamsul has had his experience of working as Bangladesh Krishi Bank officer. He is currently a Deputy Secretary of the Government People’s Republic of Bangladesh.

Alam has published his articles in international journal:

• Other publications are related to his outstanding write up in numerous newspapers & magazines. He is well known as columnist and researcher with special attention to governance crisis and political downturn during democratic era of Bangladesh. His articles were published in Daily Naya Diganta, Akhon Samoy, Thikana, Bangla Patrika, Probashi Voice and Probashi barta of New York and Surma of London.

• He is a Registered Graduate of Dhaka University. • During 2004-06 Alam contributed for the prospect and enhancement of Civil services as an elected Joint Secretary of BCS (Administration) Services Association, a service organization of 4500 civil servants where he also a life member.[2] • He has performed prestigious job of the member recruitment of Officers' Club during 2004-6 where he is permanent member. • He also served as chair of the Ninth BCS Forum 2004-06. • During early age formed Royal Sporting Club in Gosairhat as founder secretary during 1984-85 which played significant role in sports and cultural field and also relief works.

Alam is prominent in his locality for massive infrastructural expansion of Gosairhat. He organizes funds and projects to provide appropriate support for the development of the underdeveloped region, also helped local government to prepare new projects. Prior to 1995 where there were no pucca road in Gosairhat Upazila, during the last decade 200 miles metallic roads and bridges were made including road connection with capital city in his initiative. Other infrastructural developments were extended hospital facilities, new telephone exchange, development of 5 bazaars, 7 growth centers, embankments and orphanage, constructed many school buildings, installed hundreds of deep tube wells for purified water and expansion of rural electrification. At present Gosairhat is one of the developed upazilas of Bangladesh. Moreover, he also helped in development of different areas like Damudya, Bhedarganj, Muladi, Shariatpur, Natore and Narail District.

Being a young farsighted civil servant he addressed many challenges during his career. One of the remarkable issue he challenged is to point out the Principal Secretary to the Prime Minister, as a black sheep in the Prime Minister’s Office who subsequently embarrassed Begum Khaleda Zia’s government through controversial activities and interview to Bangladeshi daily Janakantha newspaper. Some influential corners tried to ousted Alam from personnel team of Khaleda Zia but they failed and made propaganda against him which subsequently nullified by an investigation. Owing to his sincerity, integrity and trust worthiness, Bangladeshi Prime Minister Begum Khaleda Zia select him in her own office personnel team from 1992 to 2006.