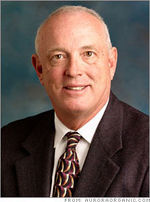 Mark Retzloff is a self-described "organic expansionist" (he believes that larger organic enterprises allow for greater economies of scale, according to the Colorado Biz Times)[1] who has made a lot of money in organics, according to FORTUNE Magazine.[2] He is the former president of Aurora Organic Dairy, a large factory farm milk producer bottling private-label organic milk for Walmart, Costco, and Target that he co-founded in 2003.[3] According to the Cornucopia Institute, an organic watchdog group, "Aurora was found by the USDA in 2007 to have 'willfully' violated 14 tenets of federal organic law -- likely the largest scandal in organic industry history"[4] (Aurora settled with the USDA in August 2007 without paying any fines).[5] Subsequent to this finding, Retzloff became chairman of the Organic Trade Association's research arm, The Organic Center (see this and other ties below).[6] As of June 2013, he is a co-founding partner of Greenmont Capital Partners, a venture fund financing young companies in the health and sustainability "lifestyle" sector; and President and Director, as well as a twice-over co-founder, of Alfalfa's Market, a natural food store in Boulder, Colorado.

In April 2007, complaints by the organic watchdog organization Cornucopia Institute led to the U.S. Department of Agriculture issuing Aurora Organic Dairy a "notice of proposed revocation" of its organic certification for "willful" violations of federal organic standards. According to Colorado Biz Today, "The USDA listed 14 violations, among them that Aurora Organic had entered conventional cows into milk production before the required one-year period of continuous organic management, and had failed to establish and maintain cows’ access to pasture at its Platteville facility. . . . Aurora Organic settled with the USDA in August 2007, agreeing among other things to reduce the size of its herd at the Platteville farm from 4,200 to 1,000 cows and increase its grazing pastures by 75 acres."[8] But that settlement also did not involve any financial penalty for the company.[2]

Retzloff told FORTUNE Magazine that he feels victimized by the charges, despite the slap on the wrist issued without financial penalty (the Cornucopia Institute called this a "sweetheart deal"). "We don't think we did anything wrong," Retzloff said, adding that he thinks current rules about access to pasture are too vague and other violations listed by the USDA were either trivial or committed by a supplier that the company no longer uses. "People are saying you're not putting your cows out to pasture," he says. "Well, we are. Just not the way you'd like us to."[2]

According to Colorado Biz Today, "Class-action lawsuits on behalf of consumers have been filed against not only Aurora Organic but against retailers such as Costco, Wal-Mart and Safeway that carry Aurora Organic milk under various private labels. Nineteen different lawsuits, representing plaintiffs in at least 40 states, have been consolidated in U.S. District Court in St. Louis."[8]

He is also on the boards of the following non-profit organizations: The Organic Center, RSF Social Finance, The Deming Center for Entrepreneurship at the University of Colorado’s LEEDS School of Business, Center for Sustainable Systems Board, and the Dean's Advisory Committee for the School of Natural Resources & Environment at the University of Michigan (his alma mater). He is an advisor to the biodynamic Rudolf Steiner Foundation, the biodynamic certifying body Demeter Group, and Living Routes, an eco-village focused study abroad program. He has been Chairman of the Organic Alliance since 1990, and lobbied Congress for the passage of the Organic Foods Production Act of 1990.[3] He was on the board and chairman of the finance committee of Shining Mountain Waldorf School, which his three children attended, for fourteen years.[9]

From 2001 to 2004, Retzloff was CEO and Chairman of Rudi's Organic Bakery LLC, the largest producer of certified organic bread in the United States shipped frozen around the country.[12] He co-founded Horizon Organic Dairy in 1991 (it sold to Dean Foods in 2003) and worked in senior management positions, including CEO and Chairman, there until his resignation in August 2002. He co-founded Rainbow Grocery in Denver (which eventually sold to United Natural Foods[13]). In 1969, he co-founded Eden Foods.[3]