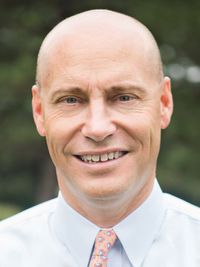 Marc Short has held many titles in a variety of conservative and Republican organizations. As of May 2020, Short is founder and chairman of the Coalition to Protect American Workers, and co-chair for Advancing America's Freedom. Prior to holding that position, Short was Vice President Mike Pence's Chief of Staff and President Donald Trump's White House legislative affairs director.[1]

At earlier points in his career short was a senior advisor for Sen. Marco Rubio's 2016 Presidential campaign, which was seen as potential signaling that the Koch network was backing Rubio.[2] From 2011 to 2016, Short, was the president of Freedom Partners. In that role, he oversaw the spending of grants from that Koch donor organization, which amounted to over $250 million in 2012.[3]

During the 2012 election cycle, Freedom Partners served as a "de facto bank" for much of the money spent by the Koch network in that election, according to the Washington Post. It played a key role in "the network of politically active nonprofit groups backed by the Kochs and fellow donors in the 2012 elections [which] financially outpaced other independent groups on the right and, on its own, matched the long-established national coalition of labor unions that serves as one of the biggest sources of support for Democrats."[4]

Short's other titles include time as a senior fellow at the University of Virginia Miller Center; a CNN Contributor; a spokesman for the Department of Homeland Security; chief of staff for Republican Senator Kay Bailey Hutchison; aide to then-Congressman Mike Pence; chief of staff for the House Republican Conference; and the director of the Virginia Finance Committee for Oliver North’s senatorial campaign.[5][1][6]

Tenure in the White House

Short's return to the White House as Pence's Chief of Staff was remarked by the New York Times as a sign that the chief executive was expanding the number of "seasoned veterans as the president heads into what is expected to be a grueling re-election campaign." The same article states Short's first time in the White House was marked by involvement with passing "the tax bill that the president backed in 2017, as well as the confirmation of Justice Neil Gorsuch to the Supreme Court." Short is the first senior administration who left and returned to the White House.[7]

In a column written while Short was in college, Short called homosexual intercourse "repugnant" and claimed it was the reason for people contracting HIV and AIDS. Short was writing in a conservative publication at Washington and Lee College that he co-founded and was the editor of. He went on to say that there was a "propaganda campaign ignited by gay activists and carelessly perpetuated by journalists whose intent is to scare all heterosexuals into believing they are prime targets for contraction of the disease.” That “campaign's purpose" was "both to lobby Congress for more federal funding of AIDS research and to destigmatize the perverted lifestyles homosexuals pursue" according to Short. He has since expressed regret for those sentiments.[8]

Usage of Fox News to Communicate with Trump

According to a New Yorker piece, some insiders believe the President is "is more influenced by Fox pundits and guests than by his staff, or by the intelligence experts who brief him." Reportedly, Short attempted to counterbalance this by organizing congressional Republicans' appearance on the channel so that the President would see their point of view.[9]

"as we approach the first anniversary of the white nationalist violence against this university, this town, and our friends, neighbors, students, faculty and staff — all of whom are represented among the injured — it is unconscionable that we would add to our university a person who served in a high-level position for the administration that first empowered, then defended, those white nationalists. We are a community still in the process of healing, and someone who defended the president’s remarks after the violence here is a barrier to that process, a source of trauma in a still-traumatized community."[10]

The petition gathered over 4,000 signatures. After the appointment it was revised to call for Short's fellowship to be "revoked, and that a full review be held to understand how this appointment was made."[10] Short told Politico that he was ""sympathetic to the pain in the community" and that "I think we could have done a better job expressing sympathy for the victims and outrage at those who perpetrated this evil."[11]

Short has been heavily involved with the Koch brothers and their network of right-wing donors. Along with Freedom Partners’ Kevin Gentry and Americans for Prosperity’s Tim Phillips, Short came up through GOP politics in Virginia, and together, the three so-called Koch operatives have been characterized as “the Koch’s liaisons to Washington’s professional conservative class.”[12]

Short has been described as the newest member of that particular inner circle, having been hired in 2011 to work for the Kochs, though not officially joining Freedom Partners until 2013.[13] In his role, Short oversees the spending of Koch and Koch-tied money by affiliated organizations, some of which, in turn, is spent against Democrats in elections. He was also the Kochs’ representative to the Karl Rove-led Weaver Terrace Group, a coalition of right-wing organizations that coordinated ad spending in the 2012 election cycle. Short took over after the departure of another Koch operative, Sean Noble.[12]