Kelly Services is a temporary staffing company, based in the U.S., with operations in over 30 countries. According to the company, besides temporary staffing, it also offers full-time placement and outsourcing services. It started in 1946 offering only female clerical help but has expanded to include light industrial, technical, and professional employees of both sexes. It places information technology people, engineers, accountants, lawyers, scientists, substitute teachers, and medical staff.[1] 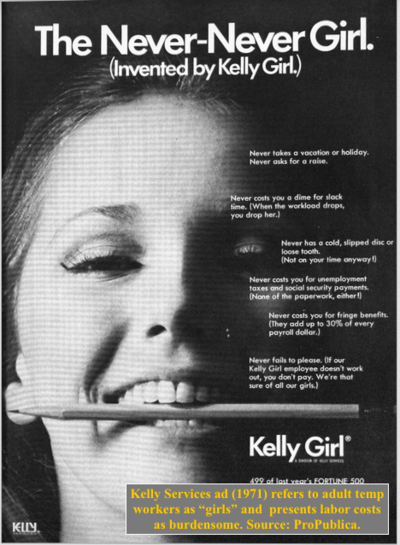 Being founded at a time when labor unions were at their most influential, temp agencies like Adecco's pre-merger predecessors and Kelly Services avoided union opposition by strategically presenting temporary work as "women's work" in advertising, which suggested that temps were housewives working for extra spending money, according to Erin Hatton, Assistant Professor of Sociology at the State University of New York, Buffalo, writing for the New York Times.[3]

With the help of these gender stereotypes, temp agencies established "a new sector of low-wage, unreliable work" that was exempt from many of the protections won by labor unions in other parts of the economy.[3]

By the early 1970s, temp agencies were promoting what they called "a lean and mean approach to business that considered workers to be burdensome costs that should be minimized," with the help of ads like one by Kelly Services advertising "The Never-Never Girl," who "Never takes a vacation or holiday. Never asks for a raise. Never costs you a dime for slack time. (When the workload drops, you drop her.) Never has a cold, slipped disc or loose tooth. (Not on your time anyway!)"[3][4]

Kelly Services reporting $99,010 in contributions to federal candidates in the 2014 election cycle, with 29 percent going to Democrats and 69 percent to Republicans.[7]