Judith A. Curry was chair of the School of Earth and Atmospheric Sciences at the Georgia Institute of Technology unti she retired in 2017. She runs a climate blog and has been invited by Republicans on several occasions to testify at climate hearings about uncertainties in climate understanding and predictions. Climate scientists criticize her uncertainty-focused spiel for containing elementary mistakes and inflammatory assertions unsupported by evidence. Curry is a regular at Anthony Watts' denier blog, as well as Steve McIntyre's Climate Audit, another denier site. She has further embarrassed herself (and her university) by using refuted denier talking points and defending the Wegman Report, eventually admitting she hadn't even read it in the first place.[1] Curry has agreed with Trump's description of climate change as a "hoax", writing in 2016 that the UN's definition of manmade climate change "qualifies as a hoax".[2]

Curry has a B.S. in Geography from Northern Illinois University (1974) and her PhD in Geophysical Sciences from the University of Chicago (1982).[3]

Curry's research interests have included hurricanes, remote sensing, atmospheric modeling, polar climates, air-sea interactions, and the use of unmanned aerial vehicles for atmospheric research. In 2010 and beyond, she has been looking at uncertainty.

Curry's academic positions have been:[1]

The identities of Curry's clients have not been disclosed.

Curry receives ongoing funding from the fossil fuel industry. In an interview with Curry for a October 2010 Scientific American profile[5], Michael Lemonick reports (pers. comm.) that he asked Curry about potential conflicts of interest, and she responded,

"I do receive some funding from the fossil fuel industry. My company...does hurricane forecasting...for an oil company, since 2007. During this period I have been both a strong advocate for the IPCC, and more recently a critic of the IPCC, there is no correlation of this funding with my public statements."

Curry believes the IPCC has done a bad job of characterizing uncertainty".[6] She believes "skeptical scientists" have difficulty getting their papers published.[7] She does not view herself as a climate hawk[8] (one who judges that the risks of climate change are sufficient to warrant a robust response.[9]) - though somewhat confusingly, she denies playing down the urgency of climate action: "I am saying nothing about that one way or the other".

In September 2010, Curry started a weblog, Climate Etc., which takes the same "stress-the-uncertainties" approach also seen in other efforts to thwart science-based policy actions, as documented by Naomi Oreskes and Erik Conway in their book Merchants of Doubt[10].

Curry's contrarian-leaning "public outreach" public communication is criticized by prominent climate scientists and other science-aligned climate bloggers for a propensity toward "inflammatory language and over-the-top accusations ...with the...absence of any concrete evidence and [with] errors in matters of simple fact."[11],[12],[13],[14],[15],[16].

"...Examples of the unreliability of Curry's blog publications are illustrated by Michael Tobis[17] and James Annan[18], who both showed basic flaws in her understanding of uncertainty and probability, or at least an irresponsible level of sloppiness in expressing herself. Arthur Smith pointed out an under-grad level misunderstanding[19] in her own field's basic terminology," said Coby Beck.[11]

Climate scientist James Annan has provided examples (with rebuttals) of assertions made by Curry on topics like no-feedback climate sensitivity, aerosols, climate change detection&attribution, and the IPCC tolerance of challengers; he finds there's a pattern of "throwing up vague or demonstrably wrong claims, then running away when shown to be wrong",[20]

Willingness to criticize based on second-hand info from contrarian, inexpert sources

"In a 2010 comment[21] she called blogger Deep Climate's detailed and well-documented investigation into the Wegman Report "one of the most reprehensible attacks on a reputable scientist that I have seen" even as she revealed in her incorrect synopsis of the charges that she had not even read it for herself. ... [i.e.] she shows herself ready to publicly criticise someone else in the strongest terms based entirely on second hand information gleaned from places like Climate Audit and Watts Up With That."[11]

Gavin Schmidt has criticised Curry for "not knowing enough about what she has chosen to talk about[22], for not thinking clearly about the claims she has made with respect to the IPCC[23], and for flinging serious accusations at other scientists without just cause."[24].

Curry was a member of the partially-Koch-funded Berkeley Earth Project temperature reanalysis project headed by former global warming skeptic Richard Muller, which reanalyzed existing weather station data and found yes, global warming was real. The project FAQ[2] (and a draft paper, which lists Curry among the authors[3]) reported there was no evidence to indicate the rate of global warming had changed in the last decade.

But despite Curry's having agreed (as evinced by her coauthorship) with this conclusion, London Daily Mail contrarian (and oft-misrepresenting[4], [5], [6]) journalist David Rose portrayed a vigorously-disagreeing Curry saying, "This is 'hide the decline' stuff. Our data show the pause, just as the other sets of data do. Muller is hiding the decline."[25].

Curry backtracked somewhat on her blog, saying "The article spun my comments in ways that I never intended"[25], but didn't step back from "Our data show the pause", and "There has been a lag/slowdown/whatever you want to call it in the rate of temperature increase since 1998."[26] When pressed for the scientific basis for these statements, Curry admitted the time period was too short for a statistically significant difference to emerge. 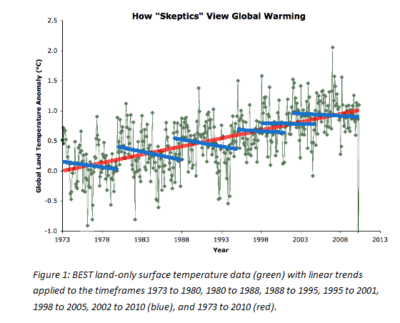 Eyeballed "pauses" are misleading - in a graph titled "How "Skeptics" View Global Warming", Joe Romm shows that if you see a "pause" in the post-1998 temperature data, you'll also think global warming "paused" at least six times from 1973-2010, covering almost the entire period - yet the global temperature actually continued to increase.[27]

Climatologist James Annan noted in passing that in this article Curry had "grossly misrepresented the IAC report."[28].

Claims not backed up

The WIRES article also didn't back up claims made earlier: in an earlier paper, Curry and Webster had said the forthcoming article "argues that the attribution argument cannot be well formulated in the context of Boolean logic or Bayesian probability...[and] argues that fuzzy logic provides a better framework..."[8] But when the WIRES paper appeared[9], it didn't do so - not even mentioning fuzzy logic, Boolean logic or Bayesian probability.[29]. (When asked, Curry said her reviewers had found that section confusing, so "in the revised version, I simplified the argument".[30])

Liu and Curry's August 2010 paper, "Accelerated warming of the Southern Ocean and its impacts on the hydrological cycle and sea ice"[31], has been criticized for its failure to cite previous papers drawing the same conclusion, and for its "uncritical use of invalid data".[32], [33]

Wikipedia also has an article on Judith Curry. This article may use content from the Wikipedia article under the terms of the GFDL.