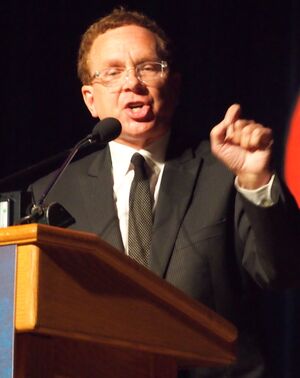 John Nichols is the national affairs correspondent for The Nation and the host of Next Left, the publication's podcast. Nichols is also the associate editor of the Capital Times. He has also contributed to The Progressive, In These Times and his writing has appeared in The New York Times, Chicago Tribute, and many other newspapers. He is the author and co-author of several books, most recently Horsemen of the Trumpocalypse: A Field Guide to the Most Dangerous People in America. In a 2001 interview, he describes his "Wisconsin Progressivism" which he believes "was born of long cold winters and dairy farmers in barns milking cows, thinking about 'how things should be.'"[1] The interview describes a "Wisconsin Progressive" as an "average hard-working citizen who understands the power of special interests, but still is willing to fight for the underdog."[1]

Horsemen of the Trumpocalypse

Discussing his book Horsemen of the Trumpocalypse on Democracy Now!, Nichols explained that "Trump has empowered people who tell him to be worse than his worst instincts."[2]

In the interview, Nichols talked about Sebastian Gorka, mentioning the Jewish-American magazine Forward's research on Trump's former Deputy Assistant. A 2017 Forward article highlights Gorka's ties to Hungarian Guard, a Hungarian far-right militia rife with anti-Semitism and a founding aim to "defend ethnic Hungarians".[3] Another delves into his affiliation with Vitézi Rend, a Hungarian organization which promotes 'racialist nativism' and collaborated with Nazis during the Holocaust.[4]

Nichols also talked about Trump's Senior Policy Advisor, Stephen Miller. He pointed out that although Miller "is 32 years old... he has almost two decades... of activism on the far right, of brutal anti-immigrant, anti-Muslim... incredibly divisive politics."[2] He also mentioned Miller's history of working together with former Attorney General Jeff Sessions, saying "In many ways, they put some of the most visceral anti-immigrant and anti-Muslim politics into the forefront within the Republican Party."[2] Nichols also drew attention to a white nationalist blog post which read: "'You know, Donald Trump, he’s not really a racially conscious man. He doesn’t get it. But there are men around him who do get it, people like— or who at least understand some of these issues: Bannon, Sessions and Stephen Miller.'"[2]

Nichols called Betsy DeVos "the centerpiece" of his book, bringing up her status as a super-wealthy Republican donor, her fight to privatize education, and her brother Erik Prince's company Blackwater that was extensively researched and written about by Jeremy Scahill.[2]

Talking about the military industrial complex, Nichols explained his decision to include Rex Tillerson with the generals in the Trump Administration, saying "He is diminishing the State Department, which has existed since the founding of the republic, and he is making it less of a player. What happens when we make the State Department less of a player? Diplomacy, international aid, all these responses that are alternatives to war are diminished."[2]

Speaking on Steve Mnuchin and other Trump-appointed financiers, Nichols quipped "it’s insulting to Marie Antoinette to make comparisons with these people". On former Chief Economic Advisor Gary Cohen, he worried, "we’ve lost sight of the fact that we’re living in a crisis of neoliberalism. Neoliberalism is a disaster. It’s been a disaster for the U.S. and for countries around the world, combining austerity for everybody who works for a living; huge tax breaks, redistribution of the wealth upwards for the very rich; and hypermilitarized, big military spending. And Gary Cohn is— that’s him. That’s what he advances."

Nichols is the husband of Center for Media and Democracy's former deputy director, Mary Bottari.