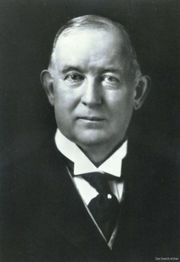 Buck gave tens of millions of dollars to Trinity University, which was renamed Duke University in honor of his and his family's philanthropy.