The Foundation for Government Accountability (FGA) is a right-wing advocacy group based in Naples, Florida. It is run by former Maine legislator Tarren Bragdon. It is a member of the State Policy Network (SPN), a web of state pressure groups that denote themselves as "think tanks" and drive a right-wing agenda in statehouses nationwide.

The FGA describes its own agenda as developing free market public policies that “achieve limited, constitutional government and a robust economy that will be an engine for job creation across [Florida].” The FGA “believes personal liberty and private enterprise are key to our economic future,” the website states.

Bragdon launched the website FloridaOpenGov.org as part of the Foundation for Government Accountability.

A 2013 report by Progress Florida and the Center for Media and Democracy notes:[1]

"FGA frequently brags about its influence in state politics and clearly has well-established ties with state legislators. In 2012, for example, FGA bragged that it had 'engaged early on' House and Senate sponsors of HB 1003, a proposal to create a new exemption from tangible personal property (TPP) taxes for businesses with less than $50,000 in business equipment, to successfully influence the legislation. According to FGA’s own post on its website, the organization had 'regular discussions and meetings' with the sponsors of the bill and the Governor’s office. However, FGA did not have a registered lobbyist in Florida in 2012. While a 501(c)(3) non-profit can engage in a limited amount of lobbying, it appears that FGA's outreach to Florida legislators about changing Florida's laws is not so limited. However, its federal tax filings for 2012 have not yet been made publicly available."

In April 2013, FGA registered a lobbyist at the Florida statehouse, its government relations director Chris Hudson. While FGA's website does not disclose this, Hudson is also Florida Public Affairs Director for Strategic Advocacy, a public affairs consulting firm based in Maine and registered as a foreign corporation in Florida. Hudson registered as a lobbyist to represent FGA April 16, 2013, but at around the same time in March and April 2013 he also registered to lobby on behalf of Apalachee Center, Inc., Capitol Insight, LifeStream Behavioral Center, MediSKY LLC, and Mental Health Care, Inc., and in November 2013 he also registered to lobby on behalf of Florida Onsite Wastewater Association.[2]

LifeStream, Apalachee, and Mental Health Care, Inc. are all Medicaid providers in Florida. According to Progress Florida's 2013 report, "Meanwhile, FGA has actively pushed for the expansion of a Florida Medicaid privatization pilot program[3] that has boosted the profits of providers of Medicaid services at the expense of expanded enrollment and patient care, according to critics.[4] FGA’s activity on behalf of the privatization scheme has included presenting the plan to ALEC,[5] [which] endorsed the program’s expansion.[6] Hudson’s representation of firms that rely on government spending comes despite FGA’s and Bragdon’s advocacy for reductions in government spending."[1]

A study funded and written by the organization contributed to Florida Governor Rick Scott's defense of his controversial welfare drug-testing law, requiring benefit recipients to take a drug test as a qualification for benefits. The law came under fire from the ACLU and other groups, and a Bush-appointed federal judge threw out the Foundation's study as evidence, claiming it was "not competent expert opinion" and that "even a cursory review of certain assumptions in the pamphlet undermines its conclusions."[7]

In January 2012 FGA Chief Executive Officer, Tarren Bragdon, created and launched the website FloridaOpenGov.org. The website is an online database of the salaries of Florida’s public employees and is almost an exact replica of a project by Bragdon at his last place of employment, the Maine Heritage Policy Center.[8]

The website is a compilation of “about 35 million public records detailing nearly $1.4 trillion in spending and payroll by state, county, municipality and school,” according to the FGA.[9]

According to a FGA Press Release,[9] data include:

Through 2016, the Foundation for Government Accountability received $925,000 from the Lynde and Harry Bradley Foundation.

2016: $350,000 to support a project on “reducing the welfare state and restoring the working class.” “FGA has worked to advance reforms that move people off of welfare as well. In this case working with the Bradley supported American Legislative Exchange Council, and the Secretaries’ Innovation Group, FGA has conducted research on and public education about the benefits of work requirements and fraud audits.” FGA wants to expand target states from original 22 to include another 19 more.

2015: $350,000 to support public education about Medicaid and a project on reducing the welfare state and restoring the working class. “During the past couple of years, FGA’s principal project has been to educate the policymakers and the public in specifically targeted states about the benefits of rejecting Medicaid expansion under Obamacare… Along with the Bradley supported Galen Institute, (CEO Tarren) Bragdon and FGA have contributed constructively to the health care debate. Its topic specific, in depth focus on state level reform has been of a piece with much of Bradley’s other recent strategic grantmaking—including, among others, to the American Legislative Exchange Council, the Center for Energy Innovation and Independence’s group of state attorneys general, the Goldwater Institute’s state litigation alliance, the Interstate Policy Alliance, the Manhattan Institute for Policy Research’s Center for state and Local Leadership, the Sagamore Institute, Think Freely Media, the State Human Service Secretaries’ Innovation Group and the State Policy Network.”

Ties to the Franklin Center for Government and Public Integrity

Franklin Center Director of Communications Michael Moroney told the Center for Public Integrity (CPI) in 2013 that the source of the Franklin Center's funding "is 100 percent anonymous." But 95 percent of its 2011 funding came from DonorsTrust, a spin-off of the Philanthropy Roundtable that functions as a large "donor-advised fund," cloaking the identity of donors to right-wing causes across the country (CPI did a review of Franklin's Internal Revenue Service records).[19] Mother Jones called DonorsTrust "the dark-money ATM of the conservative movement" in a February 2013 article.[20] Franklin received DonorTrust's second-largest donation in 2011.[19]

The Franklin Center was launched by the Chicago-based Sam Adams Alliance (SAM),[23] a 501(c)(3) devoted to pushing free-market ideals. SAM gets funding from the State Policy Network,[24] which is partially funded by The Claude R. Lambe Foundation.[25] Charles Koch, one of the billionaire brothers who co-own Koch Industries, sits on the board of this foundation.[26] SAM also receives funding from the Rodney Fund.

Connections to other Right-wing Think Tanks and Groups

The Foundation's CEO and Director, Tarren Bragdon, is the former head of the Maine Heritage Policy Center, a Koch-funded and affiliated right-wing think tank described as very influential within the Maine GOP establishment.[27]

The Lewiston-Auburn Sun Journal of Maine, in a profile of Bragdon, noted that his Maine group faced "allegations that its increased involvement in this year's gubernatorial election pushes, if not violates, the political lobbying limits allowed by its tax-exempt status."[28] 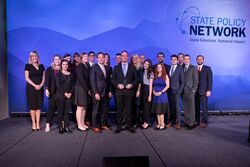 The Foundation is a state affiliate of the State Policy Network, a web of state pressure groups that denote themselves as "think tanks" and drive a right-wing agenda in statehouses nationwide. Mother Jones writes of the State Policy Network: "Its mission is simple: to back a constellation of state-level think tanks loosely modeled after Heritage that promote free-market principles and rail against unions, regulation, and tax increases. By blasting out policy recommendations and shaping lawmakers’ positions through briefings and private meetings, these think tanks cultivate cozy relationships with GOP politicians. And there’s a long tradition of revolving door relationships between SPN staffers and state governments. While they bill themselves as independent think tanks, SPN’s members frequently gather to swap ideas."[29]

The FGA is a 501(c)(3) tax-exempt organization and does not disclose the source of its funding. Bragdon has previously said that ”initial donors who were interested in having [him] here” in Florida were responsible for his move to the state.[8] However, the non-profit has received a lot of its funding from national organizations, including: