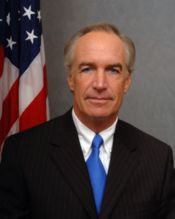 Dirk Kempthorne is the U.S. Secretary of the Interior

Dirk Kempthorne, a former governor of Idaho, is the Secretary of the U.S. Department of the Interior. President George W. Bush originally nominated Kempthorne on March 16, 2006.

Bush, "selecting a pro-development Western Republican to push for more oil and gas drilling" [1], "urged the Senate to move quickly on his nomination." Lynn Scarlett, Norton's deputy, was to serve in the interim.

Kempthorne replaced Gale A. Norton, who resigned March 10, 2006, after serving as Secretary for five years. [2]

Florida Sen. Bill Nelson, a Democrat, threatened to block the nomination until receiving assurances that the new secretary would not pursue oil drilling off the coast of Florida." [3]

"Tony Massaro of the League of Conservation Voters noted that, in Congress, Kempthorne voted with the environmental position just 1 percent of the time. 'Enough said,' said Massaro." [5]

"Lawson LeGate, southwest representative of the Sierra Club, said Kempthorne had a record of not supporting protections for public lands: He supported drilling in the Arctic National Wildlife Refuge, opposed the Clinton-era roadless rule, and weakened the endangered species and water protections.

"'For a presidential administration that has sought to systematically dismantle the legal framework for environmental protections in this country, Governor Kempthorne will fit right in,' said LeGate. 'I think it is really a case of: 'Meet the new boss, same as the old boss'.'" [6]

"'He represents a continuation of five years of an administration policy of exploiting public lands for oil and gas development and other resource extraction,' said Philip E. Clapp, president of the National Environmental Trust. 'President Bush could not have named a Western governor more in line with this administration.'" [7]

In July 2003, UPI reported that a Knight-Ridder "analysis of Kempthorne's record [on the environment] in his four-and-a-half years as governor showed he [had] cut the state budget three times and sharply reduced enforcement. It claimed he allowed the air to get dirtier, waters to become more polluted and more toxins to escape into the environment."

As a U.S. Senator, "Kempthorne repeatedly earned low rankings on environmental scorecards, especially after he supported placing an Air Force bombing range in the breathtaking Owyhee Canyonlands. (It was later scaled down markedly by the courts.) As governor, he went to court to keep grizzly bears out of his state, trimmed environmental services budgets and enthusiastically backed the Bush administration's loosening of road-less protections in national forests," according to a March 17, 2006, Los Angeles Times editorial.

"In his six years in the Senate, Kempthorne championed a rewrite to the Endangered Species Act that was criticized by some environmental groups, but won the backing of key Democrats, including the current Senate Minority Leader Harry Reid, D-Nev. The bill did not pass the House. ... Kempthorne also helped pass amendments to the Safe Drinking Water Act," Robert Gehrke wrote in the March 17, 2006, Salt Lake Tribune.

"As governor, he opposed the Interior Department's decision in 2000 to reintroduce Grizzly Bears into the Bitterroot Range and recently the state said it would shoot wolves to control populations, after a deal with Interior that grants the state management of the packs," Gehrke wrote.

Kempthorne "signed a measure in 2001 to make Idaho the first state to cover breast and cervical cancer treatment for poor women. He has also become an outspoken advocate for drug law reform, with a specific call for treating substance abuse rather than doling out harsher punishment." [8]

"Idaho's governor, Republican Dirk Kempthorne, helped finance his re-election by receiving about $86,000 â?? about 8 cents of each dollar â?? from timber, mining and energy industries that could benefit from greater access to national forests in his state," USA Today's Tom Kenworthy reported July 24, 2005.

"Two of Kempthorne's top three donors for the 2002 campaign were the Coeur D'Alene Mines Corp., which gave $13,922, and the Potlatch Corp., a forest products company, which gave $12,034, according to the non-partisan Institute on Money in State Politics," Kenworthy wrote.

Between January 1989 and June 1995, Kempthorne received $80,000 and ranked #21 on a list of Senators who received campaign money from 54 political action committees who are members of the American Petroleum Institute and California independent oil producers. [9]

According to his White House nomination, "Governor Kempthorne has served as Idaho's Chief Executive since 1999. As a two-term Governor, he has served as Chairman of the National Governors Association, Chairman of the Western Governors Association, and President of the Council of State Governments. Governor Kempthorne was also a member of the Columbia River Basin Forum, which established a regional plan to save wild salmon in the northwest.

Wikipedia also has an article on Dirk Kempthorne. This article may use content from the Wikipedia article under the terms of the GFDL.