Debbie Levin is the President of the Environmental Media Association, a position she assumed in 2000.[1] In this role, "Levin works to garner attention for pressing environmental issues by leveraging the power and visibility of television/film and celebrities through various initiatives."

"Since becoming President, Levin has reenergized the venerable organization, transforming it into a marketer of eco-healthy messages and a magnet for young Hollywood, specifically engaging this new generation of celebrity on a deeper level to share the message of environmental awareness. Possessing deep relationships in the entertainment industry, she has recruited various celebrities for EMA’s Board of Directors and recently created a Young Hollywood Board comprised of notables such as Amy Smart, Rosario Dawson and Nicole Richie.

"Levin has also grown The Environmental Media Awards into a prestigious annual event and has forged partnerships with the likes of Whole Foods Market, So Cal Edison, Silk, Tiffany & Co., Earthbound Farm and Toyota (Fortune magazine has called EMA a “secret weapon” for Toyota/Lexus, crediting the organization and Levin as “single-handedly responsible for getting droves of celebrities into Toyota hybrids.”)

"Ever evolving, EMA has recently launched several exciting new programs and partnerships including a California Green Communities program, a national cell phone recycling campaign and an organic gardens program with the Los Angeles Unified School District to support organic gardens and greenery in urban schools across Los Angeles. EMA will directly support a number of school gardens through funding and celebrity mentoring.

"Levin obtained her Bachelor of Arts degree from the USC School of Cinematic Arts and currently resides in Los Angeles with her husband. Her son is a filmmaker and her daughter is an eco-fashion designer."[2] 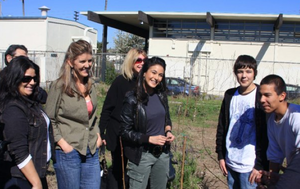 Mud Baron, Master Gardener, was the School Garden Program Specialist for the Los Angeles Unified School District (LAUSD). In 2008 he approached Debbie Levin and Environmental Media Association about the EMA and its celebrities supporting the organic school gardens program he oversaw in Los Angeles. In 2008/2009 EMA agreed and signed on its first corporate partner. Then in the summer of 2009 EMA partnered with the Kellogg Garden Products Company, a firm primarily in the business of selling sewage sludge, unlabeled, as "compost." Mud Baron warned EMA at the time that Kellogg products contained sludge, and must be kept off the organic gardens. On May 2, 2011, he stated so in a signed affidavit. [3] 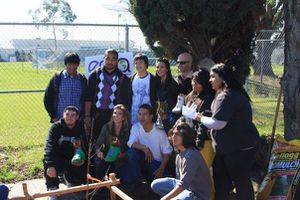 Emmanuelle Chriqui with Debbie Levin, Kathy Kellogg Johnson, and students at Carson Senior High School with a bag of Kellogg's sludge-based product Gromulch. This photo was downloaded from Chriqui's website on May 7, 2011. 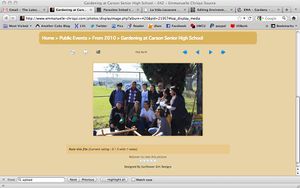 Screenshot of the above photo, showing the website it was taken from. 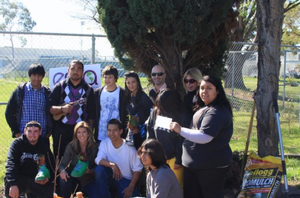 Another photo of Chriqui, Levin, and Kellogg Johnson with children at the same event. 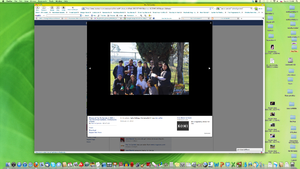 Screenshot of the photo above, showing it was taken from the Yes to Carrots Facebook page. Screenshot taken May 8, 2011.
Retrieved from "https://www.sourcewatch.org/index.php?title=Debbie_Levin&oldid=776167"
Categories: