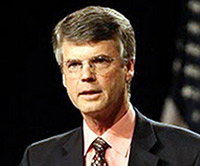 Citizens for Self-Governance (CSG) is a right-wing political organization tied to Eric O'Keefe that is campaigning for an Article V convention to amend the U.S. Constitution.

CSG's website states that it "will elevate awareness and provide resources, advocacy, and education to support organizations and individuals exercising their rights to govern themselves."[1] CSG has sued the IRS over its investigation of whether certain politically active organizations were incorrectly filing as non-profits.[2] Through its "Convention of States" project, CSG promotes an effort to amend the U.S. Constitution pursuant to Article V, which provides that thirty-four states (two-thirds) can trigger a convention to propose an amendment, which must then be ratified by 38 states (three-fourths).[3]

Eric O'Keefe is the Chairman of the Board, he has deep ties to Charles and David Koch and has been a founder and funder of numerous right-wing groups including Wisconsin Club for Growth, which is central to the so-called "John Doe" criminal probe involving Governor Scott Walker. O'Keefe has fought back against the probe through the press and the courts and has involved CSG in that fight. In 2015, CSG launched the website WisconsinJohnDoe.com [1].[4] CSG also reportedly funded a variety of lawsuits connected to the John Doe, including a 2014 lawsuit in Wisconsin to end enforcement of the state campaign finance law on illegal coordination between dark money groups and candidates (see below).[5]

CSG was a "Chairman" level sponsor of the 2013 annual conference of the American Legislative Exchange Council (ALEC) in Chicago. That level of sponsorship, which cost an estimated $50,000, included four invitations to all VIP events, four conference registrations, a VIP photo opportunity, advertising, and the opportunity to have a "workshop" with legislators or the introduction to one of its luncheons. CSG was also listed as a sponsor of ALEC's host committee that year.[6] (See the brochure here.) CSG was also listed as a sponsor for the 2014 ALEC conference in Washington, D.C., and paid for breakfast for ALEC legislators to hear Mark Levin, radio host and president of the Landmark Legal Foundation, urge state legislators to support a constitutional convention.[7]

CSG has held workshops on its constitutional amendment strategy during at least two ALEC conferences.[3] At the 2013 workshop, titled "Calling a Convention of the States: The Constitutional Check on the Abuses of Federal Power," CSG president Mark Meckler announced the launch of the Convention of States project.

In a workshop at the 2013 ALEC meeting, Michael Farris, a Senior Fellow at CSG, advised ALEC members on messaging and warned against the use of terms like "states rights."

"It's not about states rights, it's about local control," he said.

States rights is associated with slavery, Farris said, but by using terms like "local control," "you just steer the language in the proper direction."[8]

Through its Convention of States project, CSG is pushing for a constitutional convention in order to to severely restrict federal power, for example by redefining the Commerce Clause to prohibit Congress from enacting protections against child labor laws , or by adding a balanced budget amendment to the Constitution. CSG has promoted this strategy in workshops at the 2012 and 2013 annual conference of ALEC, which has published a "how-to" manual for an Article V constitutional amendment and offers a "model" resolution, the "Balanced Budget Amendment Resolution."[3] In June 2016, Jim DeMint, formerly head of the Heritage Foundation became a senior advisor to COS.

"Various activist groups have sought to amend the constitution on specific points through an Article V convention before, but few have been as well-funded or as ideologically driven as the Convention of States Project, steeped in evangelical Christianity and backed by millions of dollars in dark money. Between 2011 and 2015, the group’s budget more than tripled to $5.7 million—buoyed by donations from the Mercer Family Foundation and various donor-advised funds linked to the Koch brothers," Brendan O'Connor reported in June 2017. Arn Pearson of the Center for Media and Democracy said “Convention of States is a much more radical approach to a constitutional convention... Their budget has increased dramatically. This is their effort to push the state agenda as far as they can while they hold peak power.”[9][10]

Convention of States hosted a three-day simulated constitutional convention in September 2016 in Colonial Williamsburg, Virginia. The promotional video, invoking a sense of nostalgia, describes the city as the place "where liberty was born". A nearly seven-hour video of the "historic simulation" is available on the organization's YouTube channel here. The mock convention passed amendments related to right-wing agenda items, easing the process to repeal federal regulations, requiring approval to increase the national debt, imposing congressional term limits, repealing the 16th amendment, limiting the Commerce Clause and requiring a supermajority to impose federal taxes.

In March 2014 the Convention of States application was passed by the state of Georgia, making it the nation's first. During the 2017 legislative session, COS introduced wide-ranging resolutions calling for a broad convention to limit the powers of the federal government in 24 states and won passage in four, Arizona, Missouri, North Dakota, and Texas, bringing the total number of states to pass COS resolutions to 12, as of June 2017. Most of the states that have passed Convention of State resolutions are in the deep south, prompting some critics to call it the “New Confederacy.”[10]

CSG funded a class action lawsuit filed in 2013 on behalf of a number of right-wing and Tea Party groups against the IRS.[2] The suit argues that the plaintiffs, who had filed for tax-exempt status as "social welfare" groups, were unfairly "targeted... for intensive and intrusive scrutiny" because of "their apparent dissent from the policies or ideology of the Executive Branch of the United State Government under its current Administration."[11] The plaintiffs sought "unspecified monetary damages for the IRS's alleged violation of the Privacy Act of 1974 and the First and Fifth Amendments of the U.S. Constitution," according to the Chicago Tribune.[12] As of July 2015, the suit had not been resolved.

During the 2012 election campaign, a number of groups that filed for tax-exempt status were flagged by the IRS for extra review over whether the groups were engaged primarily in political, rather than social welfare, activity.[13] An IRS field office in Ohio identified some organizations using a list of keywords, including "Tea Party" and "patriots," prompting accusations from right-wing groups that the reviews were partisan and politically motivated.[14] However, documents obtained by USA Today show that while the majority of groups that received extra scrutiny in 2010 were right-leaning, many liberal or progressive organizations were also flagged for review;[15] furthermore, many "social welfare nonprofits" stated on their IRS applications that they would not spend any money on activities related to the election, but did in fact spend funds on election-related advertising and activities, as Pro Publica reported, and politically active social welfare nonprofits spent some $256 million during the 2012 elections.[13]

In a 2014 lawsuit that was funded by CSG,[5] CRG Network challenged the Wisconsin Government Accountability Board's (GAB) definition of illegal campaign coordination, claiming that it has a constitutional right to coordinate with political candidates. CRG Network, which does not disclose its donors, "told the court it want[ed] to collaborate with" several candidates for political office and to create a website and run ads in the 2014 election, according to the Milwaukee Journal Sentinel.[5]

The lawsuit addressed the issue at the heart of a John Doe investigation into possible illegal campaign coordination related to Wisconsin Governor Scott Walker and other groups including CSG board member Eric O'Keefe's Wisconsin Club for Growth (WiCFG).[16] One of O'Keefe's main complaints about the John Doe investigation, as described by his lawyer, David Rivkin, is that it was "chilling" free speech and the ability of political organizations to raise and spend money in Wisconsin,[16] claims that were echoed by CRG Network's lawsuit.[5] CRG originally formed to pursue the recall effort that helped Walker become Milwaukee County Executive, and it has also been represented in this and other lawsuits by Rivkin.[17]

In October 2014, an order blocking enforcement of the coordination rule was issued by U.S. District Court Judge Rudolph Randa,[18] who as CMD reported regularly attended all-expenses paid "judicial junkets" funded by the Charles G. Koch Charitable Foundation, the Lynde and Harry Bradley Foundation, and other ideological and corporate interests.[19] As of November 2014, the case is on hold while CRG Network petitions the Wisconsin Supreme Court to rule on how to interpret campaign finance law regarding coordination.[20]

CSG files its tax forms under the name John Hancock Committee for the States. CSG does not disclose its donors;[21] however, organizations that have reported making contributions to CSG include:

Years listed indicate FY of tax filing and may not indicate calendar year grant was received.