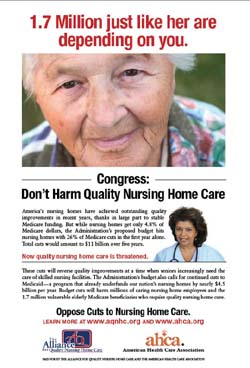 The Alliance for Quality Nursing Home Care is an umbrella group founded in 2000 by fifteen for-profit members of the American Health Care Association (AHCA) that has run major print and radio campaigns to advance it is agenda.What is not obvious from the advertisements (such as the one on the right) is that the alliance represent the views of for-profit nursing care operators such as HCR Manor Care, Sun Healthcare Group, Tandem Health Care, Kindred Healthcare and Advocat Inc. Its founding members include the nation's 11 largest nursing home companies. (See below for the current membership list). The Alliance represents nursing home operators who want reduced federal regulation - and the Republicans who promise it.

In 2000, Joel Connelly wrote in the Seattle Post-Intelligencer that the Alliance "mounted a million-dollar TV campaign that calls on viewers to contact Vice President Al Gore and tell him to 'restore' alleged cuts in the skilled-nursing care benefit in the Medicare program." The New Orleans Times-Picayune reported that Democrats called the $1 million ad campaign as "a blatantly partisan smear job engineered by an industry association that has given money to Republicans, including Gore's presidential opponent, Texas Gov. George W. Bush."[1]

The Times-Picayune reporter Bill Walsh wrote in the June 10, 2000 piece, "The Congressional Budget Office also cast doubt on industry assertions that it had fallen victim to an overzealous Clinton-Gore administration intent on balancing the budget for political gain. Congressional Budget Office officials said many factors outside the administration's control have worked to decrease rates, including lower-than-expected inflation."[2]

In 2004, Earle brought charges against the Alliance, which a Boston Globe on September 29, 2005 described as "a Boston-based group that lobbies on behalf of for-profit nursing homes." The article continued, "Earle alleged that the Alliance violated the law against corporate campaign contributions by giving $ 100,000 to Texans for a Republican Majority. The Alliance has denied wrongdoing, and the case has not been resolved."[4]

In September of 2005, The Alliance for Quality Nursing Home Care, "an umbrella group founded more than five years ago by for-profit members of the American Health Care Association (AHCA), is laying the groundwork to formalize its organizational structure as most, if not all, of its 15 member companies have either quit AHCA or plan to leave, according to Jim Morrell of Quinn Gillespie & Associates, who spoke on behalf of the alliance," The Hill reported on September 7, 2005.[5] At least seven of the Alliance's 15 for-profit members "have decided to end their relationship with AHCA at the national policy level but will continue to work with the organization at the state level," Inside CMS reported on September 8, 2005.[6]

The Hill article, which described the maneuvering as the "splintering of lobbying interests representing different sectors of the nursing-home industry," continued: [1]

The decisions to ramp up the operations of the alliance and to part with AHCA were motivated by "a desire to be able to put more time, energy and resources" into issues of particular concern to alliance members, [Quinn Gillespie's Jim] Morrell said. These companies, for example, depend much more heavily on Medicare payments than most nonprofit nursing homes, which mainly serve Medicaid beneficiaries.

Heretofore, the alliance has been a loose confederation of like-minded companies employing only one full-time Washington-based policy adviser and a number of high-profile hired-gun lobbyists, such as former Rep. Vic Fazio (D-Calif.), former Republican National Committee Chairman Ed Gillespie and former Centers for Medicare and Medicaid Services Administrator Tom Scully.

PR Firms Used by the Alliance