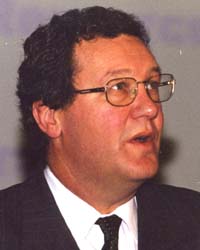 Alexander Downer is the Australian Minister for Foreign Affairs, a position he has held since March 1996. He also served as the federal parliamentary leader of the Liberal Party of Australia from 1994-1995.

As Minister for Foreign Affairs, Downer has supported the U.S. in the incarceration of two Australian citizens, David Hicks and Mamdouh Habib in the Guantanamo Bay prison. Habib was eventually released without charge, while Hicks remains imprisoned. Downer supports the Bush Administration's position on the special Guantanamo military commissions that are to be used to try Hicks. [1]

In January 2007 Downer sought to downplay concerns about the mental health of an Australian citizen, David Hicks, who has been imprisoned in Guantanamo Bay since January 2002. "A visit took place just a few days ago ... and the report of that meeting was that he was healthy. There was no suggestion that he was suffering from mental illness," Downer said in a radio interview. [2]. Downer refused to disclose who it was that had met Hicks. The Australian reports that "the assessment of Hicks's health was made by the public affairs officer at the US embassy during a three-minute meeting on January 12 where Hicks refused to speak." The official was Scott Weinhold. Downer claimed that criticism of him for implying that Weinhold was "a psychologist or some doctor with special qualifications" was unjustified. [3]

Part of the material on this page is adapted from Wikipedia.