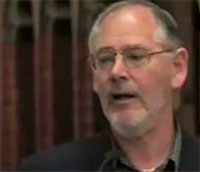 William Kinimonth
Quote: "More greenhouse gases will not cause the atmosphere to warm..."

Kininmonth has a B.Sc. from the University of Western Australia, a M.Sc. from Colorado State University, and a M.Admin. from Monash University. He has no published peer-reviewed research on climate change according to a search of 22,000 academic journals. There is one study published in 1972 by "Kininmon, WR" on the subject of "Rain-grown rice in Northern Australia".[2]

He is listed as an "expert" on Kyoto issues at Envirotruth, was a member of Australia's delegation to U.N. climate treaty negotiations, and until 1998 was head of Australia's Bureau of Meteorology's National Climate Centre for 12 years.[3] Kininmonth is listed as an expert reviewer on the IPCC fourth assessment report , Working Group I [4] He is also listed as 'Science Advisor' to the skeptic SPPI[5]

In a letter to to The Age newspaper, Kininmonth wrote that "Greenhouse gases emit more radiation than they absorb and their direct impact is to cool the atmosphere. More greenhouse gases will not cause the atmosphere to warm..."[6] This claim defies the fundamental laws of physics, critics have pointed out.[7]

In 2010, Kininmonth published a paper in an obscure journal called Il Nuovo Saggiatore that concluded "...model projections of anthropogenic global warming are exaggerated and a doubling of CO² concentration is unlikely to see global temperatures exceed 1ºC."[8]

His 2004 book launch was organised by the Lavoisier Group and was chaired by Hugh Morgan, the President of the Business Council of Australia. John W Zillman, President of the Australian Academy of Technological Sciences and Engineering, launched the book,[9] critiquing some aspects of the book. Zillman said: "I believe that Bill goes much too far and, for whatever reason, misinterprets and/or misrepresents some important aspects of the science of climate change that are now pretty well understood."[10]

In a review to be published in the Australian Meteorological Magazine,[11] University of Melbourne associate professor of meteorology Kevin Walsh argued that Kininmonth failed to present the case for natural warming. "Some of his detailed arguments are a little bit curious," Dr Walsh told The Age. "Some of his statements actually contradict well-accepted work."

Articles, letters and Presentations by Kininmonth