WikiFOIA is an online encyclopedia which provides information on how to use Freedom of Information laws at the state and local level. The site is sponsored by the Lucy Burns Institute (LBI), a Madison-based 501(c)3 nonprofit organization. LBI also sponsors Ballotpedia, which tracks elections and ballot measures at the state level; and Judgepedia, which provides information on the nation's judges and court systems. WikiFOIA is also sponsored by the Sunshine Review.

Through these online resources, LBI says it is dedicated to "openness in politics on both sides of the aisle"[1] and "empowering ordinary citizens with ways to both learn about local government, and share the information they learn with others."[2] Even though the organization is a major proponent of transparency in government operations and budgeting, it provides limited information about how the organization itself is funded.

For the Center for Media and Democracy's piece "The Lucy Burns Institute (Publishers of Ballotpedia, Judgepedia and WikiFOIA) and Her Right-Wing Bedfellows" click here.

LBI and the Sam Adams Alliance

The president of LBI, Leslie Graves, is married to Eric O'Keefe, the CEO of the Chicago-based Sam Adams Alliance (SAM). LBI took over Ballotpedia and Judgepedia from SAM in 2009[3] and continues to receive funding from SAM, as of their most recent IRS filing.[4] SAM is a 501(c)3 public charity that says it is devoted to pushing "free-market principles."[5] Of its $3.9 million budget,[6] SAM also provides funding to groups such as the Tea Party Patriots Foundation, the First Freedom Foundation, and the Citizens in Charge Foundation. SAM gets funding from the State Policy Network (SPN) which is partially funded by The Claude R. Lambe Foundation, a project of Charles Koch who co-owns Koch Industries with his brother David. 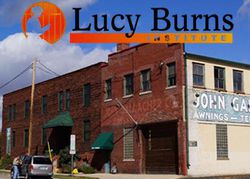 The LBI staff -- based both in Madison and other parts of the country -- have links to right-wing organizations and individuals, including the Kochs.

Leslie Graves is the president of LBI.[7] In 2006, Graves started Renewal Voter  Outreach,[8] registering it as a Nebraska Limited Liability Corporation (LLC).[9] The  company was paid  $1.4 million[10] to conduct petition drives for two ballot initiatives in Nebraska. One was in favor of a "Humane Care" amendment to the state constitution which would prevent the withholding of food and water from terminally ill patients at the request of their kin, unless there were a written "advance directive," or living will, specifying otherwise. According to The Omaha World-Herald, about one out of every five signatures[11] needed to get the amendment on the ballot, were  thrown out.[12] The other petition drive was for a ballot measure to put a cap  on state spending, which also failed. A blogger[13] traced the string of connections between a nonprofit organization, tied to her husband Eric O'Keefe (who previously sat on the board) and his daughter (who served as director),[14] which provided money to a group which then funded two other  groups which in turn provided funding to Graves' LLC to collect the petitions.

Graves has also been very involved[15] with Rachel's Vineyard, a Catholic organization that offers weekend retreats for women who have had abortions, which is intended to reconcile what the ministry calls "the sin of abortion."[16]

Graves, formerly known as Leslie Key, became the Wisconsin chair of the Libertarian Party in 1979 and served as a regional representative on the Libertarian National Committee until 1983.[17] Before her stint in politics, Leslie served as an editor for the Update newsletter, published by the Libertarian Review Foundation. The publication was criticized in the Libertarian Forum for being "an unofficial organ" disseminating the views of Ed Crane, the founder of the Cato Institute who served as its president until October 2012. A 1981 memo from Crane to Graves and David Koch illustrates the relationship: "David Koch has indicated he will kick in $10,000 to Update next year. If Leslie is very nice to him we might be able to talk him into $5,000 more (right, David?)."[18]

Graves is married to Eric O'Keefe the CEO of the conservative Sam Adams Alliance (SAM). O'Keefe has been featured at events funded by David Koch's Americans for Prosperity (AFP) group which is heavily involved in supporting right-wing politicians with independent expenditures and other assistance that stretches the limits of legality. O'Keefe is a right-wing political operative that has deep ties to the Koch brothers. He helped launch the American Majority Tea Party group which trains right-wing candidates to run for office. He sits on the Board of Directors of the Club for Growth Wisconsin, which ran divisive ads in support of Governor Scott Walker's radical overhaul of collective bargaining rights for Wisconsin workers. He has also served on the board of Koch's Institute for Humane Studies, the Center for Competitive Politics, and chairs the Health Care Compact Alliance.[19]

Geoff Pallay, special projects director of Ballotpedia,[20] is a graduate of the Koch Associate Program, a program of the Charles G. Koch Charitable Foundation.[21] He worked as a policy analyst for the South Carolina Policy Council, during which he was "also learning Market-Based-Management -- a management philosophy created by Charles Koch, CEO of Koch Industries."[22] Pallay has been featured at events such as a policy forum earlier this year at the Cato Institute (along with Eric O'Keefe).[23]

Kelly O'Keefe, Eric O'Keefe's daughter and the Director of Development for LBI,[24] worked as development associate for the Koch-funded Institute for Humane Studies (IHS),[25] which works to identify, develop, and support young libertarians. She was also a Koch associate at the Charles G. Koch Charitable Foundation. (LBI also employs Graves' daughter, Sara Key, as Operations Officer.)[26]

Christopher Bedford, an associate editor at the right-wing news outlet The Daily Caller, is a former staff writer for LBI and Koch associate for the Charles G. Koch Charitable Foundation.[27] Eileen McGuire-Mahony, a former Ballotpedia Staff Writer, was also a Koch associate.[28][29] Hannah Mead, listed as a staff writer for Ballotpedia on her LinkedIn page,[30] was also an IHS Koch Summer Fellow.[31]

LBI's board of directors also includes right-wing and Koch ties. LBI's secretary, Jack McHugh, is a senior legislative analyst for the Mackinac Center for Public Policy.[32]The Mackinac Center is a right-wing think tank, which has received some funding from the Kochs and is also a member of the American Legislative Exchange Council (ALEC).[33]As previously reported by the Center for Media and Democracy, the Mackinac Center has been using ALEC to push efforts to weaken unions, including dismantling public sector collective bargaining rights.[34]

Erick Erickson, the Chairman of the Board and Managing Editor of Redstate, is a board member of LBI. Redstate is the "leading conservative news blog for right of center online activists."[35] Breitbart TV describes Erickson as a "right wing hero."[36] In years past, Lorri Pickens has served as the secretary/treasurer of LBI.[37]Pickens currently works as the Director of State Operations for David Koch's AFP and previously served as outreach coordinator for SAM.[38]

While LBI states that it is dedicated to transparency, it does not list any Board members nor any information about its funding on its website. The staff profiles that are listed on the website do not mention the Koch connections.

LBI and the Sunshine Review

The Sunshine Review is an ALEC Private Sector Member. Michael Barnhart, the president of the organization, represents the Sunshine Review on ALEC's Tax and Fiscal Policy Task Force. At the ALEC 2010 meeting in San Diego, Barnhart discussed proposed model legislation: "The Transparency and Government Accountability Act."[45] It was adopted by the Tax and Fiscal Policy Task Force in August 2010, and approved by the ALEC Board of Directors in September 2010.[46] Similar versions of this bill have been introduced in states such as Virginia, New Mexico, Iowa, and Utah. The bill requires the development of a detailed website listing all revenue and expenditures of the state down to the level of each check. It also includes voting record information, open records information, information on lobbying and state contracts, and ethics information. While the idea seems unobjectionable, the detailed budgeting information has been criticized as a duplicative effort to showcase and make hay of perceived "wasteful spending."[47]

The Sunshine Review also gives states a "Transparency Report Card" grading them at the level of state, county, city, and school district. The organization has evaluated over 6,000 government websites.[48] The Sunshine Review has worked closely with the National Taxpayers Union,[49] another ALEC member dedicated to eliminating taxes and shrinking the size of government. NTU President Duane Parde is former Executive Director of ALEC.[50] The group has been involved in pushing this type of transparency legislation in states across the country, even before it was adopted by ALEC.[51]

The website for the Sunshine Review, which also sponsors WikiFoia, reads: "Sunshine Review is funded largely by grants and a number of private donations. Our organization believes there is a difference between government transparency and personal privacy and for this reason we do not disclose our donors."[52]

LBI is a member of the State Policy Network (SPN), which connects and funds conservative state-based think tanks and receives partial funding from The Claude R. Lambe Foundation. SPN is an ALEC member and "Chairman" level sponsor of its 2011 Annual Meeting, and many of its affiliated think tanks are ALEC members as well.[53] LBI offers free wiki training seminars to SPN members[54] and LBI's President Leslie Graves and LBI have been featured at SPN events.[55]

LBI and the Franklin Center for Government and Public Integrity

LBI also collaborates with the Franklin Center for Government and Public Integrity, a national journalism organization launched by SAM. The Franklin Center has a presence in over 40 states with state-house news bureaus and journalists hosted by other outlets and think tanks. It provides its coverage free as a wire-like service and boasts that it "already provides 10 percent of all daily reporting from state capitals nationwide." As previously reported by CMD, despite their non-partisan description, many of these websites have received criticism for their right-wing bias.[56] Ballotpedia has hosted a series of webinars on elections with the Franklin Center.[57][58] According to the Franklin Center's 2009 990 report, it gave $43,000 to LBI that year.[59]