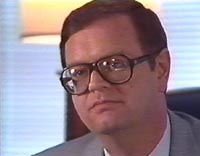 Walker P Merryman was the head of the public relations division of the US Tobacco Institute in the 1980s. He was often referred to in letters and memos as "Walter".

He is also described in the tobacco industry documents as "Assistant to the President" in October 1993 when there was a general blood-letting at the Tobacco Institute. Thirty eight staff positions were eliminated and they closed all field offices, and terminated the services of five regional Vice Presidents. Walker Merryman survived the culling and may have been responsible for devising the plan. His area of Public Relations was merged with Federal Relations, and came to be called "Issues Management".

1975 /E Radio News Director and broadcaster for stations in South Sioux City, IA, North Platte, NE, and Rapid City in Nebraska. In a suit later brought on by the State of Minnesota he explained how he was hired:

Q. Now tell us how is it that you came about to take a position with The Tobacco Institute?

A. Well I became aware of their interest in hiring someone who was familiar with broadcasting and journalism. Friend of mine who ran a job-placement service for the Radio and Television News Directors Association (later the RTDNA) told me of the position. I applied for it, and they asked for a substantial amount of background material on me, which I submitted, and went to Washington then for a personal interview, and subsequently I was hired.

Q. And what were you hired to do?

A. I was hired to respond to inquiries from the news media about issues that The Tobacco Institute addressed on behalf of its member companies.

The writer, Geoff Fox says that the main character (Nick Naylor) in the movie "Thank You For Smoking" was modelled on Walker Merryman. http://www.geofffox.com/MT/archives/2006/04/13/thank-you-for-smoking.php

Walker Merryman, as assistant to the president and spokesman for TI . His background is broadcast journalism in Iowa, South Dakota, Mass, and Nebraska.

1976 May 26 Merryman was working for TI in 1976, when complaint made about his appearance on TV to the FCC. This was over supervision by the FCC of the fairness doctrine, and the way the tobacco industry was getting around the advertising ban by public relations. The writer complains that Merryman was able to "promote unrestricted tobacco smoking and tobacco industry profits" and that this "constituted institutional advertising." She questioned "why the tobacco industry is being given an opportunity to promote a product banned by law from being advertised on television" [1]

Tobacco Institute
The Institute employs more than 100 persons in its federal and state activities, scientific and public relations departments. Four professional spokespersons -- Connie Drath, Bill Dwyer, Anne Browder and Walker Merryman -- travel the country to present the views of the tobacco industry to the public through the media and in personal appearances. They have visited 48 states and have appeared on more than one-third of the nation's television stations.