Trijicon is a manufacturer of high-powered rifle scopes based in Michigan. The company has hundreds of millions of dollars worth of contracts to supply rifle scopes to the U.S. Military. Its scopes are being used in the wars in Iraq and Afghanistan. [1]

In January 2010, ABC News revealed that the Trijicon company inscribes its rifle scopes with secret codes that refer to biblical passages that refer to Jesus. The codes are inscribed immediately after the model number, in the same font and type size as the model number. For example, the code "2COR4:6" points to Second Corinthians chapter 4, verse 6 of the New Testament, which reads, "For God, who commanded the light to shine out of the darkness, hath shined in our hearts, to give the light of the knowledge of the glory of God in the face of Jesus Christ." Another code, "JN8:12," refers to John chapter 8, verse 12, which reads, "Whoever follows me will never walk in darkness, but will have the light of life." 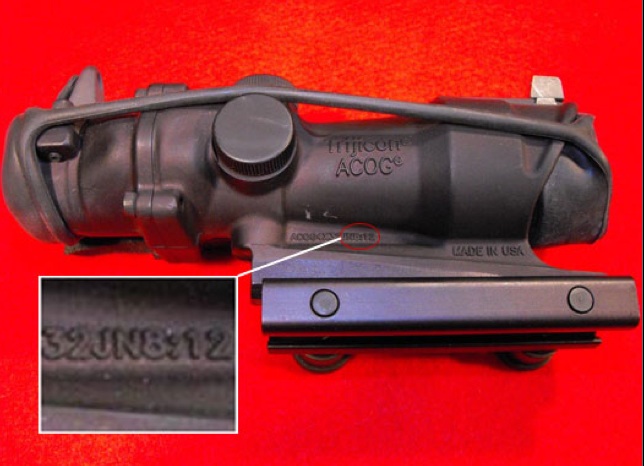 Trijicon confirmed to ABC News that the company intentionally adds biblical codes to gun sights it sells to the U.S. military. The military is using the guns in the wars in Iraq and Afghanistan, even though members of the U.S military are strictly prohibited from proselytizing. Spokespeople for the Army and the Marine Corps denied knowing about the biblical markings, even though discussions have appeared about them in Internet talk forums.

Michael "Mikey" Weinstein, an attorney and former Air Force officer who represents the Military Religious Freedom Foundation, a group that advocates for separation of church and state in the U.S. military, says the practice violates the Constitution. "This is probably the best example of violation of the separation of church and state in this country," Weinstein said. "It's literally pushing fundamentalist Christianity at the point of a gun against the people that we're fighting ... it allows the Mujahadeen, the Taliban, al Qaeda and the insurrectionists and jihadists to claim they're being shot by Jesus rifles ..." In 2005, Trijicon won a $660 million, long-term contract to supply the scopes to the Marine Corps.[2][3][4]