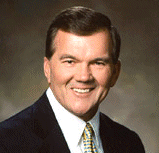 Thomas J. Ridge (Tom Ridge) was the first Secretary of the Department of Homeland Security (DHS). He headed DHS from January 2003 to February 2005. After leaving the post, he formed a Washington, DC consulting firm, Ridge Global. [1]

He "is President and Chief Executive Officer of Ridge Global, LLC, Washington, D.C., a global strategic consulting company. He has held that position since July 2006. From April 2005 to July 2006, he was President and Chief Executive Officer of Thomas Ridge LLC. From October 2001 to February 2005, Mr. Ridge was Secretary of the U.S. Department of Homeland Security. Prior to his service as Secretary of Homeland Security, he was Governor of Pennsylvania from 1995 to 2001. He is a director of Exelon Corporation and Vonage. A Hershey director since 2007, he is a member of the Governance Committee." [2]

In June 2008, Ridge filed a lobbying disclosure form on his work for the government of Albania -- nearly two years late. Ridge signed a $480,000, one-year contract with Albania in September 2006, to help the country "develop an overall homeland defense strategy based on land, air and sea security." The contract identified Ridge as the "lead on strategic advice" for the Albanian government. Ridge's firm, Ridge Global, no longer works for Albania. [6]

A spokesperson for the firm said Ridge didn't think he needed to disclose his Albania work. But the Justice Department, which maintains a database of lobbyists working with foreign entities, thought he did. The Department contacted Ridge's firm, "after a story about Ridge's work appeared in the press." According to a September 2006 Associated Press article, Ridge's "main priority" was "to help Albania meet its goal of joining NATO in 2008." Albania began accession talks with NATO in April 2008. [6]

"Prior to his current appointment, Secretary Ridge served as Assistant to the President for the Office of Homeland Security. Previously, he was a twice-elected Governor of Pennsylvania, serving from 1995 to 2001. In addition, he was elected to Congress in 1982 and was re-elected six times.[7]

"After he received his law degree, Secretary Ridge was in private practice before becoming assistant district attorney in Erie County. He also served as an infantry staff sergeant in Vietnam, earning the Bronze Star for Valor. He is a graduate of Harvard University and received his J.D. from Dickinson School of Law."[7]

Tom Ridge was Pennsylvania’s governor from 1995-2001, until appointed by President George W. Bush as director of Homeland Security in 2001. After Ridge’s retirement from that position, he founded Ridge Global LLC, a consulting firm, and Ridge Policy Group, a lobbying group.[9] Both these firms had a $900,000 lobbying contract with the Marcellus Shale Coalition from 2010-2011.[10] During Ridge's appointment with the gas Coalition, the AP reported Pennsylvania Gov. Ed Rendell admitted that information about municipal zoning hearings on Marcellus Shale natural gas drilling and a screening of the documentary "Gasland" were the subject of anti-terrorism bulletins being distributed by Pennsylvania's homeland security office.[11] Ridge is also on the board of Exelon, a utility company that bought Constellation Energy, a Maryland-based natural gas producer and utility.[12]