The 912 Project, also known as The 9-12 Project, The 9/12 Project and "We Surround Them", is a conservative activist group organized by Fox News Channel commentator Glenn Beck and which has been extensively promoted by Fox News.[1][2][3][4] The 912 Project is one of the primary groups disrupting the summer 2009 town hall meetings held by Democrats and moderate Republicans.[5] The group is part of the supposed "grassroots" element of the FreedomWorks astroturf Tax Day Tea Party campaign[6] against various Obama administration initiatives, most notably health care reform. Their methods consist of orchestrated disinformation campaigns and attempts to grab headlines through seemingly spontaneous disruptions of town halls, local government meetings and street corner protests.[7][8][9][10][11]

On March 13, 2009 The 912 Project was launched by Glenn Beck on his Fox News show [12]. Beck described the project as a "grassroots" "special interest group" for people sharing the nine principles and twelve values promoted by Beck.[13] The domain for the official 912 project website, the912project.com, was registered on February 7, 2009,[14] indicating that the 912 Project is not a true grassroots project as Beck claims,[13] but rather is astroturf, orchestrated in advance. The the912project.com site was constructed and is maintained by Beck's Mercury Entertainment Group, which Beck founded and serves as CEO.[15]

Though The 912 Project's claims it is a "non-political movement" and its goal is to "bring us all back to the place we were on September 12, 2001 ... The day after America was attacked we were not obsessed with Red States, Blue States or political parties"[16] the project pursues a wholly conservative agenda with strong opposition to what it terms the "radical liberal agenda" and "socialist agenda" of the Obama administration. An area of particular focus is the 2nd Amendment, where The 912 Project promotes the views of the gun lobby.[17] 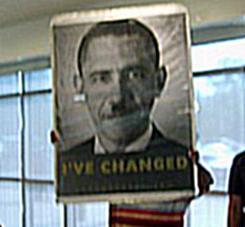 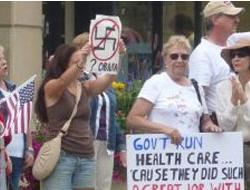 The 912 Project has also adopted the slogan and name "We Surround Them" which is seen often identifying the group in their promotional material and Web sites.[20][21] Using multiple names and provides the impression of a larger movement, in keeping with the goals and methods of astroturfing.

The 912 Project is primarily organized on the Web. Various local chapters coordinate their individual activities of coordinating members attending town halls using social networks such as Meetup.com and Ning.com.[22][23][24] The local groups receive advisory and moral support from the dedicated national site, the912project.com,[25][26] other 912 Project sites such as the912project.us[27] and Fox News proper.[28] Other conservative sites providing assistance include ResistNet.com[29] and Grassfire.org,[30] both of which were set up and are run by conservative internet promoter Steve Elliott.[31][32][33] A number of these sites distribute professionally created talking points, logos and signs for both Tea Party and 912 Project protesters.[34]

FreedomWorks provided much the organization and material used by The 912 Project as well as the Tax Day Tea Party groups. In early summer 2009 FreedomWorks sent out a "Health Care training kit," suggesting that supporters ask three questions it provided about health care at summer recess town hall meetings.[35] A memo from a volunteer with the FreedomWorks website Tea Party Patriots (teapartypatriots.org), was more specific, and detailed how members should infiltrate town halls, spread disinformation, and harass members of Congress. The memo is spread through Tax Day Tea Party and The 912 Project groups to individual protesters.

The most notable activities of The 912 Project has been to organize members to attend and disrupt the 2009 summer recess town hall meetings held by Democrats and moderate Republicans. The disruption usually takes the form of indignant speech directed at the congressmen, accusing them of supporting "socialism," "Nazi-ism," and not representing "true Americans." Much of the imagery used in their posters revolves around equating the Obama administration with the Nazi party or portraying Obama as Hitler. Former President Jimmy Carter points to protesters who have compared Obama to a Nazi as evidence that racism plays major role in their opposition to Obama.[36]

Topics generally disrupted are discussions around health care reform, the federal stimulus package, and bank and auto industry bail outs. The disruption of the town hall held on August 18th, 2009 by Republican Congressman Brian Baird, seen in the video here, is held as textbook example of disruption by Beck's The912Project.com website. Baird had described these tactics as "lynch-mob mentality" and "Brown Shirt tactics."[37] Bob Franken at Politicsdaily.com described those disrupting the health care debate as "partisan groups that whip up their fear-of-change ultra-conservative base to engage in that symbolic lynching and then disavow any responsibility" and "a crazed group of people that disrupts a meeting on health care and hangs the congressman holding it in effigy."[38]

Beyond the disruption of town hall meetings, a number of 912 Project efforts call for overthrow of the Federal government and its replacement by a conservative government reflecting the project's values. The 912 Project often invokes the role of the citizen militias in the American Revolution in its rhetoric of resistance against the federal government to support its activities and pro-gun stance.[17]

As part of the Tax Day Tea Party campaign, the 912 Project organized a march on Washington D.C. on September 12, 2009, again invoking the date of 9/12 in hopes of creating a meme.[39] CNN's Howard Kurtz said Beck "practically conceived" the 9-12 protest.[40] Participants claimed that 1.6 and 1.2 million people attended.[41] Washington D.C. Fire and Emergency Medical Services said, unofficially, that actually between 60,000 and 75,000 people attended the event.[42] Within days conservative blogs and 912 Project and Tea Party groups trying to tout the size of the event passed around an alleged photo of the event showing a packed National Mall. The photo turned out to be of another event taken sometime before September 2004, the date the National Museum of the American Indian opened, which is missing in the photo.[43]

In August 2009 a Idaho 912 Project steering committee member and foreclosure photographer was charged with felony aggravated assault for pulling a handgun on a resident whose home he was photographing as part of a foreclosure.[44][45]