The Tea Party Movement is a political movement that gained national attention in the summer of 2009 when organized protests occurred at Congressional town hall meetings on healthcare reform. The Tea Party itself is not a political party; it is a conglomerate of loosely affiliated "grassroots" organizations such as the Tea Party Nation, Tea Party Patriots, Tax Day Tea Party, and others. While the Movement has no formal political affiliations, many members endorse Republican candidates for office. There is also a Tea Party Caucus in the United States Congress. Although the Tea Party has no official platform, most of the groups associated with the Movement share the same basic ideological position on domestic and foreign affairs in that they are anti-government, anti-spending, anti-immigration, and anti-compromise politics.[1]

Jane Mayer writes in Dark Money, "On closer inspection, as the Harvard political scientist Theda Skocpol and the Ph.D. student Vanessa Williams observed in their 2012 book, The Tea Party and the Remaking of Republican Conservatism, the Tea Party movement was a "mass rebellion... funded by corporate billionaires, like the Koch brothers, led by over-the-hill former GOP kingpins like Dick Armey, and ceaselessly promoted by millionaire media celebrities like Glenn Beck and Sean Hannity.""[2]

While promoted as a spontaneous "grassroots" movement, many of the activities of Tea Party groups were organized by corporate lobbying groups like Freedomworks and Americans for Prosperity.

The anti-government fervor infusing the 2010 elections represents a political triumph for the Kochs. By giving money to “educate,” fund, and organize Tea Party protesters, they have helped turn their private agenda into a mass movement. Bruce Bartlett, a conservative economist and a historian, who once worked at the National Center for Policy Analysis, a Dallas-based think tank that the Kochs fund, said, “The problem with the whole libertarian movement is that it’s been all chiefs and no Indians. There haven’t been any actual people, like voters, who give a crap about it. So the problem for the Kochs has been trying to create a movement.” With the emergence of the Tea Party, he said, “everyone suddenly sees that for the first time there are Indians out there—people who can provide real ideological power.” The Kochs, he said, are “trying to shape and control and channel the populist uprising into their own policies.[3]

Reports indicate that the Tea Party Movement benefits from millions of dollars from conservative foundations that are derived from wealthy U.S. families and their business interests. It appears that money to organize and implement the Movement flows primarily through two conservative groups: Americans for Prosperity and FreedomWorks.

In an April 9, 2009 article on ThinkProgress.org, Lee Fang reports that the principal organizers of Tea Party events are Americans for Prosperity and Freedom Works, two "lobbyist-run think tanks" that are "well funded" and that provide the logistics and organizing for the Tea Party movement from coast to coast. Media Matters reported that David Koch of Koch Industries was a co-founder of Citizens for a Sound Economy (CSE), the predecessor of FreedomWorks. David Koch was chairman of the board of directors of CSE.[4] CSE received substantial funding from David Koch of Koch Industries, which is the largest privately-held energy company in the country, and the conservative Koch Family Foundations, which make substantial annual donations to conservative think tanks, advocacy groups, etc. Media Matters reported that the Koch family has given more than $12 million to CSE (predecessor of FreedomWorks) between 1985 and 2002.[5][6]

Koch Industries has denied specifically funding Freedomworks or tea parties directly, however. The company's director of communications wrote ""Koch companies value free speech and believe it is good to have more Americans engaged in key policy issues. That said, Koch companies, the Koch foundations, Charles Koch and David Koch have no ties to and have never given money to FreedomWorks. In addition, no funding has been provided by Koch companies, the Koch foundations, Charles Koch or David Koch specifically to support the tea parties." Koch's director of communications did affirm, however, that the company funds Americans for Prosperity (AFP). TPM's Lee Fang reports that "AFP was founded in part by the company's Executive Vice President, David Koch. He is currently the chairman of the board of the Americans for Prosperity Foundation." [7][8]

Media Matters also lists the Sarah Scaife Foundation as having given a total of $2.96 million in funding to FreedomWorks.[9] The Sarah Mellon Scaife Foundation is financed by the Mellon industrial, oil, and banking fortune. [10]

The Claude R. Lambe Foundation, also controlled by the Koch family, has donated more than $3 million to Americans for Prosperity. [11] 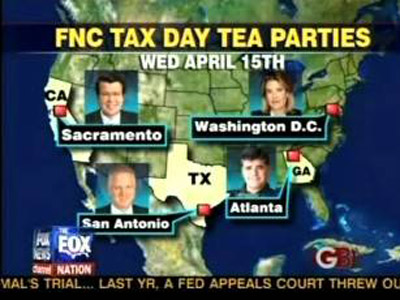 The Tea Party has also gotten substantial support in the form of promotion from Fox News Channel and its talk show hosts, including Glenn Beck. Karl Frisch of Media Matters wrote that Fox News "frequently aired segments imploring its audience to get involved with tea-party protests across the country." Fox has also provided organizing information for the events on air and online. [12]

While discussing the April 15 protests on his April 6 program, Glenn Beck suggested that viewers could "[c]elebrate with Fox News" by either attending a protest or watching it on Fox News. Beck stated that in addition to himself, hosts Neil Cavuto, Greta Van Susteren, and Sean Hannity would be "live" at different protests. While Beck spoke, on-screen text labeled those protests as "FNC Tax Day Tea Parties." [13]

According to Jane Mayer in Dark Money,

"Freedom Works, it was later revealed, also had some hired help. The tax-exempt organization quietly cemented a deal with Glenn Beck, the incendiary right-wing Fox News television host who at the time was a Tea Party superstar. For an annual payment that eventually topped $1 million, Beck read "embedded content" written by the Freedom Works staff. They told him what to say on the air, and he blended the promotional material seamlessly into his monologue, making it sound as if it were his own opinion. The arrangement was described on FreedomWorks' tax disclosures as "advertising services.""[2]

The Tax Day Tea Party protests first occurred on April 15, 2009. This event was organized by Americans for Prosperity (AFP) and Freedomworks, corporate astroturf organizations. Freedomworks hosted the Tax Day Tea Party again in Washington, D.C. again in 2010[14] According to Freedomworks, "On Tax Day, April 15th, hundreds of thousands of Americans will protest big government around the country. They will protest in big cities and small towns, from Los Angeles, California to Burlington, North Carolina."[14]

The Tax Day Tea Party is an organization of the Tea Party Movement now known as the Patriot Action Network (PAN). According to its website, the Patriot Action Network "is the official news, resource and social network of Grassfire Nation. PAN comprises a family of dozens of websites designed to help patriotic citizens get informed, engaged and networked with like-minded citizens....PAN seeks to provide patriots with a new level of networking resources as we serve the Tea Party/Patriot movement.[15] According to its website, "Grassfire Nation -- a division of Grassroots Action, is a privately-held Internet activism services organization that provides news, information and grassroots activism services and strategies to individuals and organizations.[16]

"Thomas Frank, author of What's the Matter with Kansas?, had stopped by to see an early Tea Party rally in Lafayette Square, across from the White House, in February 2009. "It was very much a put-up job," he concluded. "All the usual suspects were there, like Freedom Works, 'Joe the Plumber', and The American Spectator magazine. There were also some people who had Revolutionary War costumes and 'Don't Tread on Me' flags, actual activists, and a few ordinary people," he said. "But it was very well organized by the conservative groups. Back then, it was really obvious that it was put on, and they'd set it up. But then it caught on." Frank argues that "the Tea Party wasn't subverted," as some have suggested. "It was born subverted." Still, he said, "it's a major accomplishment for sponsors like the Kochs that they've turned corporate self-interest into a movement among people on the streets."[2]