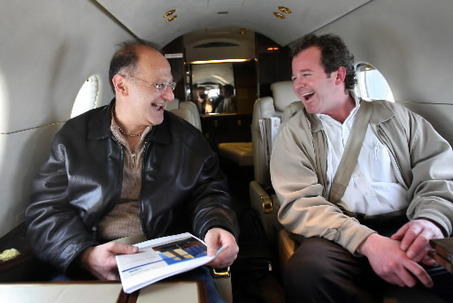 Stuart Lichter, a former employee of the U.S. General Services Administration (GSA), went into real estate development after leaving the GSA and specializes in the development of "brownfields," or contaminated sites the reuse of which may be complicated by the presence, or potential presence of hazardous substances pollutants, or contaminants. These are often sites that have been previously used and subsequently closed by major corporations or federal government agencies that dealt with defense-related activities like missile and aerospace development. Lichter purchases and develops these properties into large industrial and commercial complexes. Lichter's company is called Industrial Realty Group, or IRG. [1][2]

Lichter developed a former Boeing/NASA site located in Downey, California, which has been blamed for illnesses and deaths among workers who were employed at businesses in buildings constructed on the property after the property was deeded over to the city of Downey. The site was redeveloped before it was adequately remediated, leading to severe environmental illness among employees of a new Kaiser Medical Center and movie studio built on the site after the city acquired the land from NASA. An orthopedic technician named Gail Shepherd developed Parkinsons-like symptoms and became confined to a wheelchair after being transferred to the new Kaiser Permanente facility built on the former NASA site. Other people working in buildings on the site also developed mysterious respiratory illnesses, skin rashes, weakness, spitting up blood and other symptoms. The maladies became so well known and so linked to the site that they earned the nickname "Downey flu."[3] [4] [5]

In March 2004, IRG/Lichter purchased the 80-acre, former NASA aerospace design and manufacturing complex located in Downey, California. The site had been home to defense and aerospace projects including the Navaho Missile Project, the Apollo Spacecraft Development program, and the Space Shuttle. As the master developer of the site, IRG turned the facility into an independent film studio.

Steve Basile, a propmaker at Downey Studio’s on the feature "The Islands" in November and December of 2004, reported that he became very ill after working at the facility. He reported that "After I was there a couple weeks [at Downey Studios], I started coughing, sneezing and had respiratory problems. My breathing just wasn’t normal. And every new person that came on; it was weird, because you could see the same thing happening to him or her. With myself, after a few weeks I was itching and scratching my arms and hands." As time went on, Basile reported further symptoms, including coughing, runny nose, the skin on his hand peeling "like a snake shedding its skin," nose bleeds that were hard to stop, very bad headaches, dizziness, loss of balance, diarrhea, shortness of breath, sore throat, congestion, sinus infections, little bumps in his mouth, memory problems, depression, and little pimple like bumps that started as early as 2-3 weeks after starting the show he was working on. He reports the presence of copious mold on the site, and noted the absence of insects, even when food was left lying around after catered meals.[6] 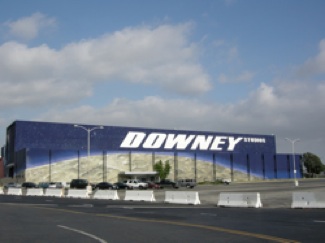 In August of 2003, yellow-greenish spots of soil contaminated with chromium were excavated from beneath Downey Studios' Building 1, the main studio building, as workers were constructing a

60,000-square-foot indoor water tank to be used for the movie “Lemony Snicket’s A Series of Unfortunate Events.” Production was halted inside the building and crews were sent home until samples of the questionable soil were tested. Test results confirmed the presence of hexavalent chromium in the soils, the "Erin Brokovich" chemical that sickened people in the California town of Hinkley -- the presence of the chemical resulted in the lawsuit featured in that movie against Pacific Gas and Electric -- and the contaminated soil was taken out of Building 1 to the back lot.[7]

According to an article about the injured workers in the the Los Angeles Times, "at least 34 people have filed workers' compensation claims over illnesses they trace to the studio complex. The Times obtained detailed records on 18 of the cases. In 11 ... independent physicians found that some or all of the symptoms were caused or aggravated by working at Downey Studios...In three other cases, independent physicians -- specialists certified by the state to offer neutral opinions in workers' compensation cases -- said the ailments appeared to be work-related but further tests were needed to make a determination. The tests were never performed because insurance companies contested the doctors' findings and refused to pay for the tests."[8]

On September 28, 2010, injured Downey workers Dina Padilla, John Kachorsky, Steve Basile, Daniel Ferguson, and their advocates went to the office of Steve Cooley, District Attorney of Los Angeles, to file workers compensation fraud and environmental crimes complaints against IRG owner Stuart Lichter. The workers charged that the development of the Downey toxic dump site sickened Downey movie workers who are members of IATSE Local 44 and SEIU hospital workers at the Downey Kaiser hospital complex. Nine complaints were filed with the Los Angeles District Attorney on November 19, 2010 and they said additional complaints were being prepared by injured movie workers and Kaiser workers.[9]

Stuart Lichter denies that conditions at Downey Studios made anyone sick.[10] and in August 2008 Lichter filed a SLAPP [Strategic Lawsuit Against Public Participation], VC 051486 filed in Norwalk Superior Court, against injured workers and advocates for workers injured at the Downey toxic dump site to keep them from speaking about their injuries and the dangers of the Downey toxic dump. [11] Lichter cited the public service website, downey.kaiserpapers.info, created by people suffering from illnesses after working at the Downey site, charging that the website was created out of malice and cost him millions, and that he had been slandered.[12]The SLAPP suit was dismissed with prejudice after Lichter refused to be deposed for the case.[13]