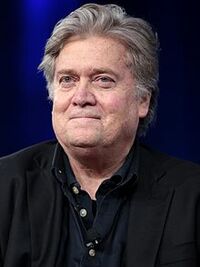 Steve Bannon is a political figure with past jobs including White House Chief Strategist, CEO of Donald Trump's 2016 presidential bid, Executive Chairman of Breitbart News Network, Goldman Sachs investment banker, movie producer, co-founder of the Government Accountability Institute, and Naval Officer. Bannon has numerous close ties to the billionaire Mercer family. According to The Washington Post the wealthy donor family and Bannon collaborated on at least five ventures which "provided fuel" for the anti-immigrant, anti-establishment narrative accredited with Trump's rise.[1]

David French of National Review said of Bannon that he "has done more than any other person to introduce the evil alt-right into mainstream American life."[2]

Public Feuds with the Mercers, Breitbart and Trump

Bannon's frequent bankrollers --the Mercers-- the President of the United States, Donald Trump, and some of Breitbart's staff have had public disagreements, claiming to have severed ties with one another.

Bannon is quoted in a book, Fire and Fury, exclaiming that members of the Trump family were treasonous, and launching insults at the President himself. This lead to a public feud with namecalling from Trump to Bannon. Rebekah Mercer issued a statement appearing to distance her family from Bannon. "My family and I have not communicated with Steve Bannon in many months and have provided no financial support to his political agenda, nor do we support his recent actions and statements."[3]

Bannon went on the publically speak highly of the president once again soon after.[4]

Former employees of Breitbart under Bannon claimed that he "highjacked" the site and brought it away from what Andrew Breitbart would have wanted for it.[5]

Relationship with the Mercers

Steve Bannon has many ties with the Mercer family. According to The Washington Post Bannon and the Mercer worked together on at least five anti-establishment pro-conservative projects. The Mercers invested significant amounts of money in to Cambridge Analytica, Breibart and the Government Accountability Institute, at which, Bannon was the former vice president, former executive chairman, and co-founder respectively. In addition, the Mercers co-founded Glittering Steel alongside Bannon and founders Reclaim New York where Bannon was an executive chairman.[1]

Through these partnerships, Bannon received a sizable income, in 2013 it was reported that he had earned $750,000 a year from his work with Breitbart News and $100,000 from his role with the Government Accountability Institute. All the while, Bannon pushed an "anti-establishment, populist movement."[1]

According to the Anti-Defamation League, former KKK Grand-wizard American white supremacist and white nationalist politician, David Duke among other White Nationalists praised Trump's partnership with Bannon stating that Bannon was “basically creating the ideological aspects of where we’re going.”[6]

Conflict of Interest at Breitbart

Steven Bannon's high-level roles in both the White House and the Breitbart Newsroom lead to many questions arising about how separate those two entities are, and if apparent the conflict of interest such brings can be ignored.[8][9]

While Bannon was working in the White House, some say he still lived in a dwelling connected to Breitbart's headquarters aka the "Breitbart Embassy." The arrangement and potential lack of distance between Bannon and Breitbart brought the comparison to state-run media from New York Magazine, which noted: "during the campaign and into the current administration, there was little meaningful difference between Breitbart’s coverage of Trump and Trump’s own press releases."[10]