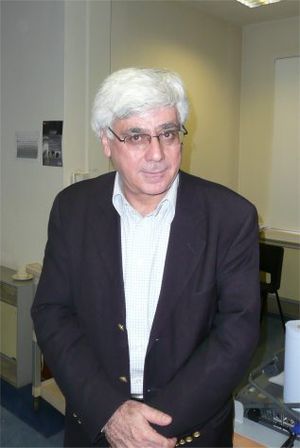 Sari Nusseibeh, "a Palestinian professor of philosophy at Al-Quds University, the Arab University of Jerusalem, was appointed president of the school in 1995. In the past few years, Al-Quds has grown to include the university’s first medical and health sciences complex, in addition to a wide range of social-oriented academic programs and centers.

"At the Radcliffe Institute, Nusseibeh will be considering, within the sphere of human affairs, the moral and functional limitations of the use of force/violence as a means to achieve or oppose political objectives. Nusseibeh has long been an advocate of peace negotiations between Israel and the Palestinians. In 2003, he colaunched The People’s Voice, a nonpartisan civil initiative to mobilize grassroots support for a two-state solution, with former Israeli security Shin Bet chief Ami Ayalon.

"Nusseibeh received his bachelor’s and master’s degrees in politics, philosophy, and economics from Oxford University and his doctoral degree in Islamic philosophy from Harvard University. From 1978 through 1990, he taught philosophy and cultural studies at Birzeit University in the West Bank. He has lectured widely in Europe and the United States and has received many prizes and awards for his work, including, most recently, the Premi Internacional Catalunya Award, which honors a person who has made contributions to the development of cultural, scientific, or human values around the world." [1] also see

The Foundation for Middle East Peace provided support for the producion of his and Mark Heller's book No Trumpets, No Drums (New York: Hill and Wang, 1991). [2]

"He was born in Sheikh Jarrah, East Jerusalem to the politician Anwar Nusseibeh and Nuzha Ghussein. He has a Ph.D. in Philosophy, from Harvard University (1978). Sari Nusseibeh and Ami Ayalon are the co-founders of The People's Voice, an Israeli-Palestinian civil initiative that aims to advance the process of achieving peace between Israel and the Palestinians. Nusseibeh is head and founder of the Palestinian Consultancy Group, co-founder and member of several Palestinian institutions including the Jerusalem Friends of the Sick Society, the Federation of Employees in the Education Sector in the West Bank, the Arab Council for Public Affairs, the Committee Confronting the Iron Fist, and the Jerusalem Arab Council." [3]

He is married to Lucy Nusseibeh. [4]